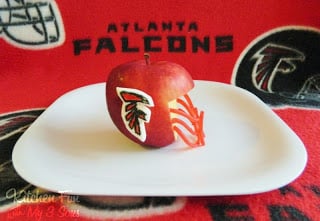 Most of you that have been following us for awhile know that we are HUGE Atlanta Falcons fans! We are so very excited to see our Falcons in the play-offs this weekend! We have home field advantage and we are confident that our Falcons will win and go to the Superbowl!!

I made this Atlanta Falcons Apple Football Snack with my 9 year old. It took us about 10 minutes to make and we love how it turned out! You could also do this with other teams with colors using red, yellow & green apples.

Cut the side out of the apple with a knife. Cut out the Falcon’s shape from the stacker marshmallow using kitchen scissors. Draw the Falcon logo on top using the edible markers. Poke holes in the cut out part of the apple and push in the Twizzler strings for the face mask. Attach the marshmallow logo on the side using peanut butte or frosting.

That’s it! A super cute after school snack for your little Atlanta Falcons fans!

Here is a close up…. 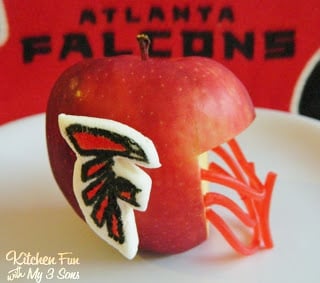 Here is my 9 year old with his fun Falcons Football Snack…. 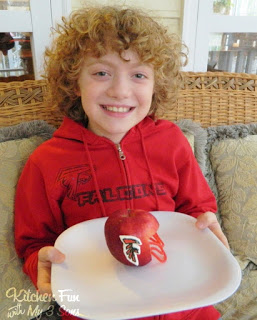 That is adorable. (I'm a huge Falcons fan, too.)

Thanks! We have a lot more fun Falcons food ideas to share…just hope they can keep winning for us to have time to make them!:)

Love it! Good Luck to your Falcons, though I hope the 49'ers go all the way:)

LOL those are so cute. Thanks for sharing with us at FFF this week.
Dawn co host FFF
https://spatulasonparade.blogspot.com

How creative it this? So cute!

Hi, Great post. I found you through the blog hop. Now following you.Please stop by and say hi when you get a chance.
Be sure and check out my new Blog Hop that we just started, It's Weekly Goals Link Up. It's a great way to stay on track. Have a great day. 🙂 Here's the link in case you want to check it out. Thanks again.https://lenettacarnes.blogspot.com/2013/01/weekly-goals-linkup-html
Lenetta

What a cute idea to carve an apple into a football helmet!!! and I am in awe of your marshmallow logo!!!

Everyone has a profession or a hobby that they excel at. Yours happens to be die-hard Atlanta Falcons NFL fanaticism. Show everyone in the stadium how a true fan supports his team and favorite player in this Nike Atlanta Falcons Limited Jersey. Inspired by the actual gear that Matt Ryan wears on the field, this jersey features a no-tag neck label that offers comfort and strategic ventilation, bold contrast color detailing, tackle twill player numbers and Ryan’s name on the back in tackle twill lettering.