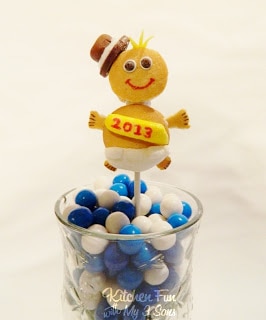 We have been so busy and took some time off from our blog this past week. I did however make this fun Baby New Year Pop with my 6 year old yesterday using things we had in our kitchen! They are easy to make and lots of fun for the kids to decorate themselves!

We used a chocolate coin for the bottom of the hat. We placed a Tootsie Roll in the microwave for 7 seconds and pressed and shaped it for the top. We attached with chocolate cookie frosting and let it dry. We made the diaper and sash using stacker marshmallows and just cut them with kitchen scissors. We colored the sash using edible yellow marker and wrote 2013 using red edible marker. We cut 1 vanilla wafer using kitchen scissors to make the hands and feet and attached them with frosting. We made little fingers and toes using black edible marker.

We used white frosting and mini chocolate chips for the eyes. We used red edible marker to make the mouth. We cut a piece from a yellow Starburst to make the hair. We placed it in a glass and then attached the hat using chocolate cookie frosting. Let it dry and you will have a Baby New Year Pop!:)

Here is my 6 year old with his Baby New Year Pop! 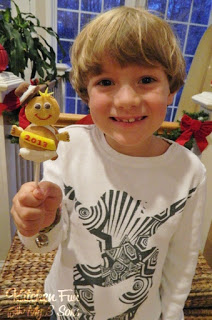 SO cute and fun!! you are awesome:)

Such a fun idea!

These are seriously so cute! Happy New Year! 🙂

Your New Year babies are adorable!

Hopping by. I blog @ Getting Healthy with Essential Oils