In about a half-hour, you can have this Instant Pot Loaded Corn Pudding on the table in time for supper. It’s destined to become a family favorite.

Corn is sort of a staple in many American cupboards and freezers. It’s versatile and inexpensive, and it incorporates into all kinds of recipes very well. For example, Skillet Mexican Corn Dip makes great use of corn, as does this recipe for Instant Pot Mexican Corn. 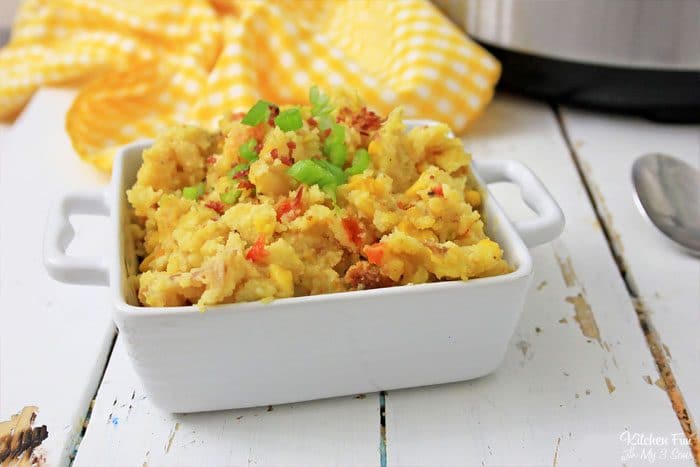 This easy recipe produces a smooth and creamy souffle style cornbread that’ll knock your socks off.

Having a few cans of corn on hand, both creamed and whole kernel, makes sense. It’s a vegetable that folks who are looking for ways to save on groceries (raises hand) appreciate.

It can be mixed with plenty of other ingredients to make delicious meals that fill up the tummies of kiddos, and don’t break the bank. That’s always a good thing.

If you’re new to using the Instant Pot or have never done a quick release, here’s what you should do.

This recipe cooks for 15 minutes, then you do a quick release, and then the additional 15 minutes you let the Instant Pot release pressure automatically.  So, after the first 15 minutes, when the Instant Pot beeps and goes to OFF, get an oven mitt, and gently turn the pressure valve from SEALING to VENTING.  Pressure or steam will be released from the Pot. This may take a couple of minutes for all the pressure to be released. 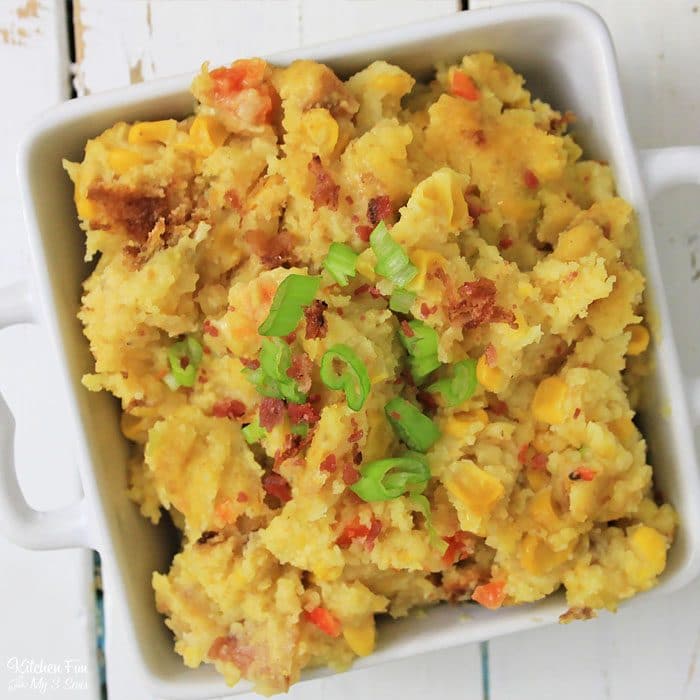 Jiffy Mix to the rescue.

Those familiar little blue and white boxes are the bomb. Do people still say “the bomb?” I don’t care. I’m saying it anyway. Jiffy has been around since 1930 and I’m not at all surprised. I’ve never tried one of their mixes that I didn’t love.

The Jiffy Corn Muffin Mix is a fave because it tastes slightly sweet. Love the stuff, especially in this recipe.

But it’s the bacon, cheese, real butter, and sour cream that turn a little box of tried and true goodness into something so savory and sweet, it’ll make you sass your momma-in-law. 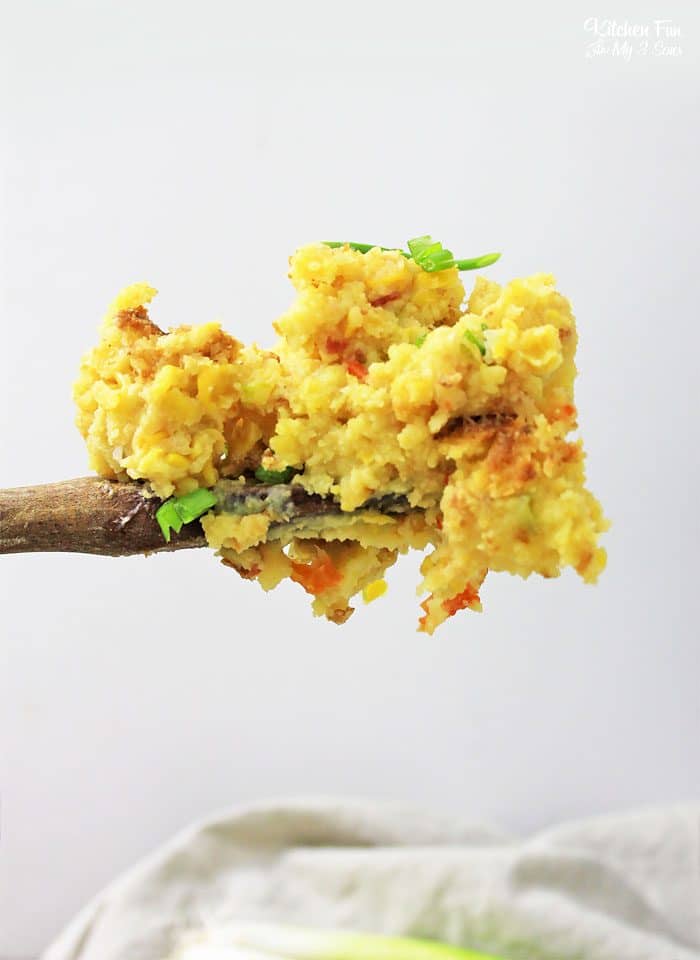 What to make with Instant Pot Loaded Corn Pudding.

What can’t your serve with corn pudding? Okay…maybe not lasagna or pizza. How about ham or chicken? Maybe whip up some chocolate chip cheesecake bars for dessert. It’s a safe bet that your family will be thrilled! 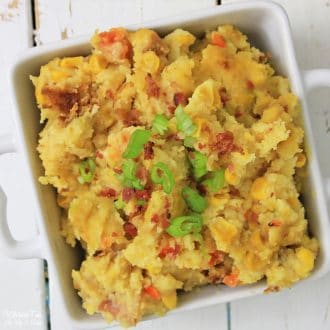 HERE' WHAT YOU NEED: 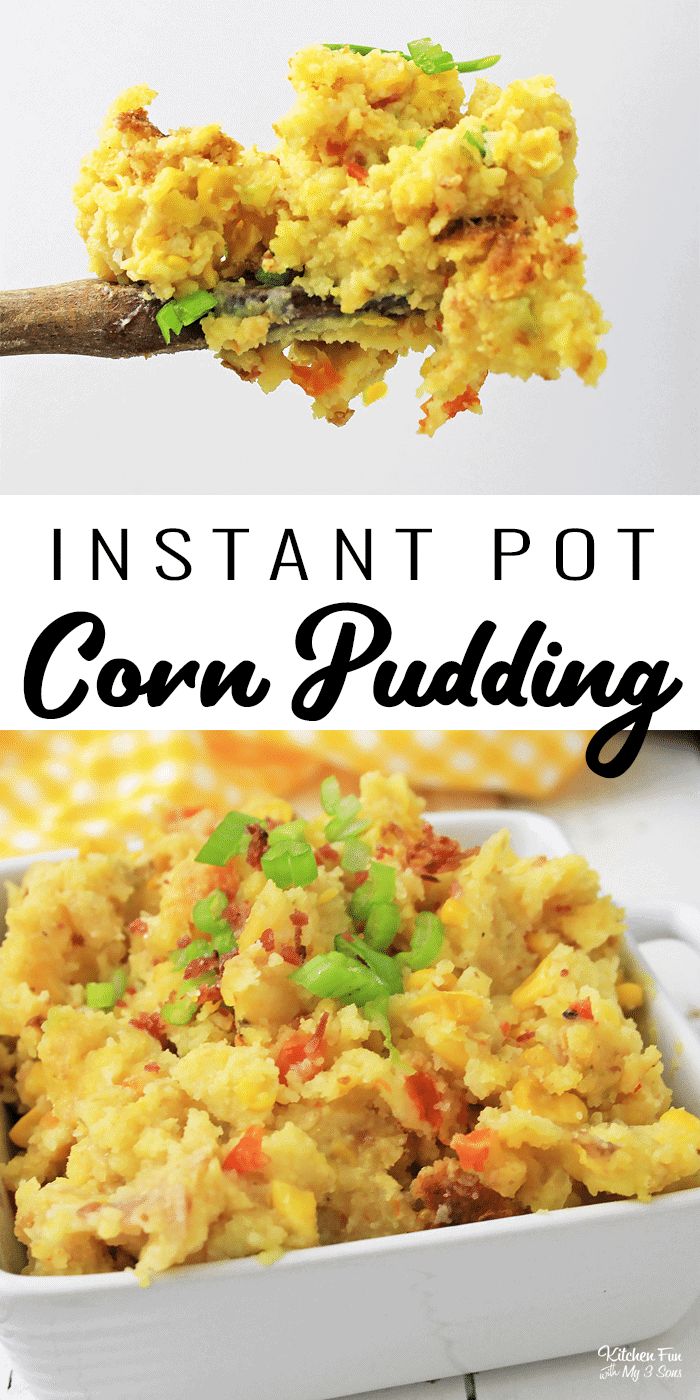