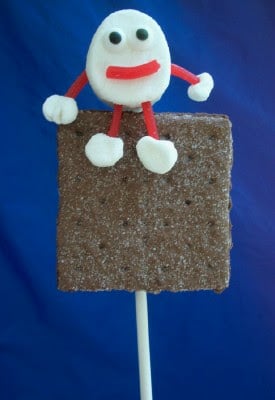 The boys loved their Humpty Dumpty sat on a WALLffle breakfast so much and we thought it would be cute to make Humpty out of a marshmallow sitting on a s’mores. We used 1 large marshmallow, 2 small marshmallows, 1 chocolate graham cracker, 2 square marshmallows (the made for s’mores kind), chocolate cookie frosting, red Twizzler strings, and edible eye balls.

We broke our large graham cracker in half. We squeezed some chocolate cookie frosting on the insides for the marshmallows to stick. You could also use melted chocolate. Put on 2 square marshmallows and pop it in the microwave for just 5 to 7 seconds. Just enough to puff it up just a little…do not melt it. Stick in on the lollipop stick with enough sticking out to add the large marshmallow.

Take the large marshmallow and poke 4 holes with a tooth pick to add the arms and legs. Take a Twizzler string and break off 4 small pieces…a inch and a half or so. Push them in the large marshmallow for the arms and legs. Cut the 2 small marshmallows in half and push those into the twizzler strings for the hands and feet. You can snip the hands to make fingers. Add the edible eye ball (or mini chocolate chips) with the chocolate cookie frosting and add a small piece of the Twizzler string for the mouth with the frosting. Pop Humpty on the top and then you are done!

This is what it looks like from the side… 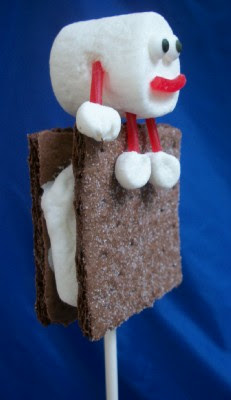 These were so easy to make! The boys were flinging these around everywhere and they stayed put. They thought they were so funny and cute…we hope that you like them as well! 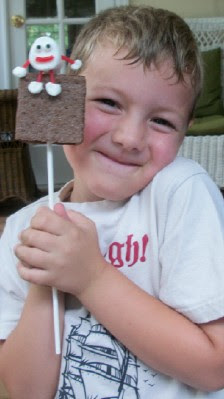 These are seriously so cute!!! I am totally bookmarking these to make for my little girl's preschool class! I would love to have you come over and link this up to our Link Party going on this weekend- and every link counts as an entry in our giveaway!
https://sixsistersstuff.blogspot.com/2011/07/strut-your-stuff-saturday-week-1.html
Camille @
SixSistersStuff.blogspot.com

These are SOOO cute!! I love how creative you are–you are an inspiration! I have a linky up right now called "flash-Back-Friday" and you can link up and old post of yours! Its like lookin back in a scrapbook. 😉 God Bless!
http://www.cookinformycaptain.blogspot.com

So cute!! I'm sure your boys LOVED them!! Thanks for sharing! Visiting from Tatertots & Jello!

I'm your newest GFC follower through the blog hop

Your blog is one of my new favorites! Your stuff is adorable. Your boys are so lucky to have such a creative mom!

I will be linking soon!

That is so stinkin' cute! I'm pinning this for later =o)

I pinned this as well..you are one of my fav bloggers.

haha super cute and original! What a great kid-friendly treat 🙂 I also wanted to invite you over to my cookbook giveaway that is going on right now. Today is the last day to enter so stop on by! Hope you are having a great week 🙂

These are adorable! I have to make them with my first graders-too cute!

Thank you for sharing your recipes with me at Cast Party Wednesday. I hope you will come back tomorrow and share more of your recipes.
Thanks,
I hope to see you there!

Wow your dishes are amazing and so creative. Thank you for joining us on I ♥ Blogging Hop I am your newest follower!

new follower from blog hop! Would love a follow back, laura

OMG have I mentioned just how much I LOVE your blog. I'm totally addicted, I check in all the time to see what you've come up with. 🙂

They look so good.