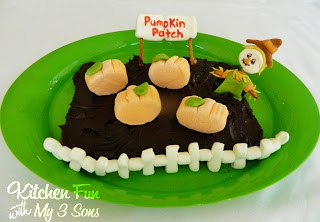 We made this fun Marshmallow Pumpkin Patch using lots of marshmallows that we received from Jet-Puffed! This is such a fun edible treat that the kids will have fun making themselves. You can use all sorts of goodies that you have already in the kitchen! My boys love choosing parts of their pumpkin patch creation for dessert!

We started out by frosting our graham crackers with the chocolate frosting. Place them on a platter. We put 4 of the jumbo pumpkin marshmallows on top. We made the fence by cutting the stacker marshmallows in 4 strips using kitchen scissors. We attached mini marshmallows in between using the white cookie frosting. Then we propped the fence upright in the front.

We made the pumpkin patch sign by attaching 2 stacker marshmallows together using the white cookie frosting. We poked 2 pretzel sticks in the bottom sides. We wrote pumpkin patch using a orange edible marker. We stood this up by cutting a Tootsie Roll in half and pressing it around the pretzel sticks and then pressing on the graham crackers.

We made a scarecrow by pressing a large marshmallow on a pretzel stick. We used black edible marker to make a face. We cut up pieces of the Tootsie Rolls using kitchen scissors to make the clothing. We cut up a yellow Tootsie Roll to look like hay. We put a caramel in the microwave for 7 seconds to soften. We cut that in half and pressed it in the shape of a hat. Press a Tootsie Roll around the bottom and then onto the graham cracker to hold it upright.

Here are my boys with their Marshmallow Pumpkin Patch creation! 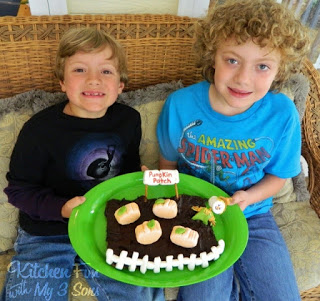 Too cute. Thanks for sharing.

What a fun use of marshmallows. I got some of the pumpkins and they are quite tasty.

I have been thinking about doing this with my Peeps pumpkins, and now that I have seen how cute it is I just may have to go ahead and do it! Super cute!

Reply
A Lived in Home

Such a cute idea! I bet the kiddos loved it! I would love for you to come link up to my Get Social party and show off your amazing blog!
https://alivedinhome.blogspot.com/2012/10/get-social-sunday_14.html

I love it all, but especially the fence and the scarecrow!

What a fun idea!

Reply
Lady Behind The Curtain

I love all your fun wonderful kid friendly creations! Thanks for sharing them at Cast Party Wednesday! ~Sheryl~

This looks so wonderful and cute!
I would love to have you join my new link party Wednesday Extravaganza! Come by and share this or other recipes. Here is the link
https://www.hungrylittlegirl.com/1/post/2012/10/wednesday-extravaganza.html

Can't wait to see you there!

Omg, That’s great!! I loved that your boys bake with you! My boys did the same with me and I love it!! Enjoy it now cuz now my boys are 17 & 14 and don’t bake with me as much but I enjoy the time they do!