Did a woman in Wisconsin lose all her hair because someone put Nair in her conditioner bottle? Let’s take a look at what happened and whether you should be worried.

Sometimes we see and hear things online that shock us. A story coming out of Wisconsin is one of those shocking things and is also the subject of a police investigation. Here’s what we know as of this writing. 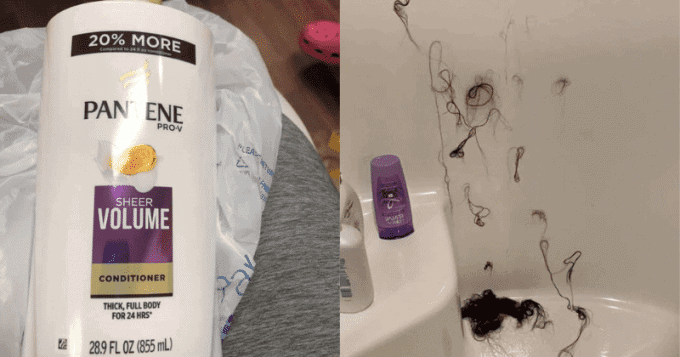 A young woman went to Walmart in July of this year and purchased some Pantene hair conditioner. A few days after she bought it, she opened it up and used it in the shower. According to her public post, her hair fell out in clumps afterward.

Walmart has video footage of this young woman in the hair care aisle, choosing conditioner. She was doing what many of us do before we buy something like that. She was popping each one open to see whether she liked the smell.

I do the same thing all the time.

“… Got in shower, shampoo [sic] and conditioned my hair, got out, something was different and didn’t smell the greatest. I carried on sat down for a bit and then decided to go blow dry my hair, I took my hair out of the towel and it smelt terrible, got back in the shower used my other shampoo and rubbed that in, as I took my hands out of my hair it was covered in hair and just kept on falling out.”

Can you imagine? Washing your hair and then watching as it comes out in your hands?

She said she went to a consultation afterward to determine whether she could get hair extensions to cover her bald spots. They said her hair was so badly damaged that they couldn’t help.

That’s when she made the decision to have a relative shave her head.

When it was all said and done, both she and her Mom had posted an account of what happened on Facebook.

Here’s what the police in her town said.

Here’s what the ER doc said about the Nair Incident

“If [she] develops further burning sensation please … re-rinse her hair. You can follow up in your clinic regarding hair regrowth. Based on the appearance of her scalp, that will likely grow back normally. However, follow-up may be necessary if you’re [sic] hair is not coming in as expected.”

Should you be worried about Pantene conditioner and/or Walmart specifically?

The short answer is, no one knows for sure yet. As it turns out, I had two bottles of unopened Pantene shampoo and conditioner in the closet. There was no seal, so yes, it’s no problem to pour whatever you want in the bottle.

On the other hand, the bottle top was really pretty difficult to get off. If you have any Pantene shampoo or conditioner in your bathroom, I’ll be interested to know if you have the same experience trying to pop off the top. I mention the top only because it makes me wonder whether a bad person could stand in an aisle in a public place, get some Nair and then get the Pantene bottle open to pour it in.

But then again, I also often wonder how people in the cosmetics section manage to open make-up and nail polish, use it and then walk away without being found out. See what I mean? It could very well have been someone at Walmart. It also could just have easily been someone in her home.

That having been said, no matter who put the Nair in the bottle, this poor girl has a burned scalp and no hair – all thanks to someone who was mean spirited and cruel.

Personally, I think the best way to avoid an incident like this is to sniff the contents before you use it because Nair has a very distinctive smell, as I recall. Before you use a new bottle of shampoo or conditioner, squirt some into your hand and look at it. If there is any hint of smell or discoloration, take it back to the store. They need to know what you found.

We don’t know whether this young woman bought tainted conditioner in Walmart, or whether someone else, perhaps in her own home, may have put the hair removal cream in the bottle.

What we do know with certainty, based on Facebook posts, is that there are folks who are being pretty hateful to this woman in their comments. I’m not a fan of mean people. You?

“In a world where you can be anything, be kind.” – unknown.

Is it possible someone bought and returned it tainted… so it actually wasn’t done in the store!?

Someone could carry a contaminated bottle into Walmart. It doesn’t necessarily have to be sabotaged in the store.

This is a horrible mean thing to do to someone.  God is watching you. I pray he gives speed and grace to the victim and fills the culprit with great repentance for their actions.  It is not a funny thing to do at all. Very very mean spirited and should be seen as such.