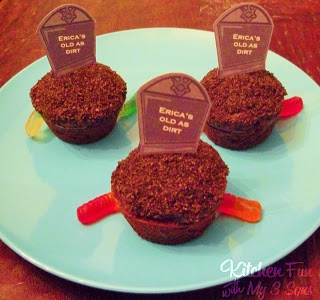 I made these Old As Dirt Cupcake/Brownies for a co-worker of mine that just turned 40. I wanted to share them with all of you because kids will like these as well. My boys thought they were really cool! They also thought I was being so mean by making them say “old as dirt”, but they just don’t understand the turning 40 thing.:)

I made these using brownie mix so I wouldn’t have to use a cupcake liners. That way I could poke holes on the sides to push in the gummy worm. I just cut the worm in half and shoved each half in both holes. I frosted the top and dipped in crushed Oreos. You could print out what you want to say on card stock..cut it out…and tape a tooth pick on the back. Super easy!

Here is my elderly birthday friend with her Old As Dirt Brownie Cupcake! 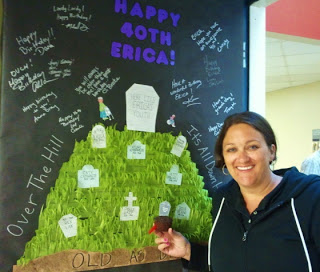 I dressed up our door at work with my co-worker Hanna. There is the big Erica’s Youth Lies Here grave stone surrounded with friends Polly Grip, Rex Lax, Billy Beano, Hillary Hemorrhoid, Caty Cataracts, Danny Depends, Petey Prunes, etc… Yes…we are very corny! I will take the blame for this.

Here is my friend Hanna’s cake that she made… 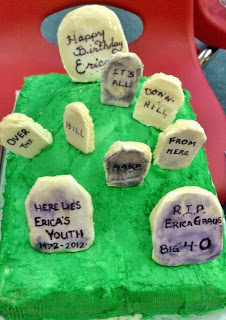 I am just a couple of years away from 40 myself. Yikes! Sorry Erica!:)

These are cute and funny! I have some neighbors nearing 40 and these would be great for their parties.

So cute! These would go down brilliantly for Halloween.

Reply
Lisa @ Flour Me With Love

What a great way to make dirt dessert! Thanks so much for sharing at Mix it up Monday 🙂

LOL so funny, but if there is chocolate, who cares how mean the saying is;p

That is totally cute. I would love it if you showed that off on my blog link party.

Super cute cupcakes! I'm sure they were a hit:)

Ha ha ha, these made me laugh. =D I never would have thought of graveyard cupcakes outside of halloween! Its a good thing Ericka has a sense of humor- great job! Oh, and I'd be honored if you had the time to stop by my debut episode of Sweet Sharing Monday (weekly party w features!) – https://saynotsweetanne.com/2012/sweet-sharing-monday/

I'm sharing Compost Cookies on my Foodie Friday linky, your dirt cupcakes would be a great idea for Earth Day. Could you post them on my site?