You’ve probably heard the viral story of Steph Curry, the Golder State Warriors basketball superstar, who was swayed by a letter from a 9-year-old girl to have Under Armour start making his shoes in girls’ sizes. 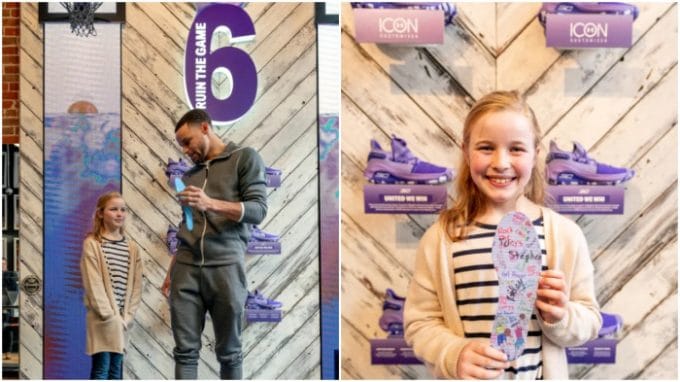 IMAGE VIA UNDER ARMOUR

It’s a great story, for sure. But for me, and for thousands of girls and women across the country, we know who the real hero of this story is:  Riley Morrison.

Like so many others, Riley is a big fan of Steph Curry. She and her Dad love going to watch him play.

That’s why she really, really wanted a pair of his trademark basketball shoes for her upcoming basketball season – the coveted Curry 5s.

Guess what? They weren’t available in the girls’ section of Under Armour, the company that makes the shoes.

Riley was having none of it. She drafted a letter directly to Curry himself.

“I asked my Dad to buy me the new Curry 5’s because I’m starting a new basketball season,” she wrote. She was disappointed to see there were none for sale under the girls’ section of the Under Armour site.

“However, they did have them for sale under the boy’s section,” she told him. “…even to customize.”

Appreciate you helping us get better Riley! We got you. #MoreToCome pic.twitter.com/UBoTklvwhg

“I appreciate your concern and have spent the last 2 days talking to Under Armour about how we can fix the issue,” he wrote in his letter back to Morrison. “…We have something special in the works for International Women’s Day on March 8th and I want you to celebrate with me! More on that, but plan to be in Oakland that night!”

Marketers want retailers to know that in order to be successful at selling your products to customers, there are some important things you need to understand.

“To men, your messages must be concise and to the point and use power words, prove what you say with facts. Provide solutions to problems utilizing the products you are selling. Men tend not to buy into products that are also targeted at women.” (Optimonk)

“When selling to a female audience your messages should tend towards being descriptive, use disclaimers and offer softer words and most importantly your message must end in such a way that it gives the feeling that you understand them and that you will support them.” (Optimonk)

Yep. You read that right.

Men like facts. They want solutions to problems. They need marketers to be concise and use power words.

And for the love of all that’s manly, do not, under any circumstance, try to sell them something if it’s also targeted to women.

Apparently, females need descriptive messages and we prefer softer words. Please let us know you understand us and that you’ll support us.

We’re just girls after all. Facts and power words confuse us. Solutions to problems? What are those?

We need to have things explained to us, but only with language as fluffy as a unicorn’s tail. Hug us with your descriptions and promise to support us.

So to Riley Morrison and Steph Curry, let me say this.

Steph Curry, thank you for taking Riley seriously and for righting what was definitely wrong. Thank you for being a man who has a documented history of advocating for young women. You’ve used your platform to do good and so, good on you. May young men everywhere sit up and pay attention to your example.

Thanks for involving her in the creation of the new Curry 6 shoes.

Riley Morrison, you are the true rockstar in this story. You are the kind of young woman who makes women my age proud. It’s exciting to imagine what the world will look like when your generation is running the world!

You saw a gender inequity and rather than complain about it to your parents and then settle for a different shoe, you slowed down and did the fiercer thing.

It’s that kind of headstrong attitude that creates long-lasting change.

Because of you, there are girls everywhere who are right now having a lightbulb moment. It just occurred to them that they don’t have to settle for less. They can do what Riley did. Many of them will.

You’re a boss. Don’t ever stop pushing for what you know is right.

Where can we get these very awesome shoes!