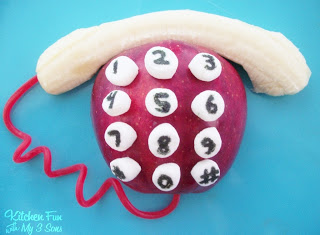 The boys had a lot of fun talking on their phone before they gobbled it up!

My child turns everything into a phone already so this will be perfect for her!
Thanks!

Reply
The How To Mommy

This looks awesome! I'm your newest follower from Top Mommy Blogs. I wanted to invite you to link up this {or any} recipe at my Tasty Thursday Recipe Swap Blog Hop. Have a great day!

That is too sweet! I could definitely use this at the preschool! I am visiting from Sugar and Dots and I am a new follower!!

Hope you are having a great week and I see you around my blog soon!

that looks so cute and such a wonderful idea! i know my two-year old will love this….

hi, visiting from I ♥ Blogging Hop and followed you via gfc; hope you'll have the time to follow back.
many thanks! 🙂

The phone is sooo cute. I am a new follower from yesterday's hop. I know…I am a little slow.

Reply
Lyuba @ Will Cook For Smiles

Come see me at https://www.willcookforsmiles.com/

how did you get the marshmallows to stick to the apple? Or do they need to?

Thank you! We cut the marshmallows in half and put the sticky side on the apple.

What a cute idea, I am so glad I found this cute blog! Thanks for sharing.
Britney
http://www.jandmseyecandy@hotmail.com

Love, love, love this idea! Adorable AND healthy! My hubby and I were just joking that our 6 month and 2 year old will probably barely remember land lines when they're…ah-hem…our age.

Very artistic indeed! Good to include the children in its preparation as well.

Hi, it's funny ! I put a link to your article on my french blog.