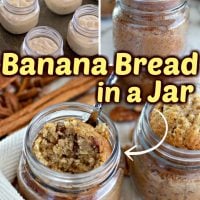 Banana Bread in a Jar is a delicious new way to make this classic homemade bread. Filled with bananas, pecans, and warm spices, this bread is a perfect sweet treat! 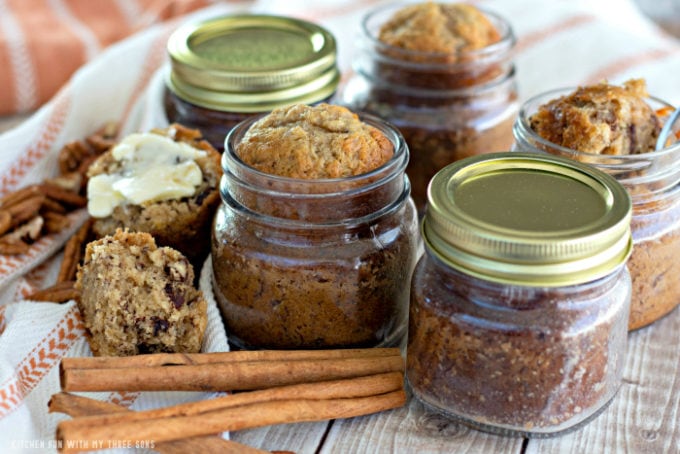 We just love banana bread and make it any time we have some bananas that are past their prime for eating. So imagine the fun of going to the refrigerator and taking out a cute little jar of homemade banana bread for a snack! Banana Bread in a Jar is also a sweet little addition to a gift basket or a nice little “thinking of you” gift.

Ingredients You Will Need

(full amounts in recipe box below) 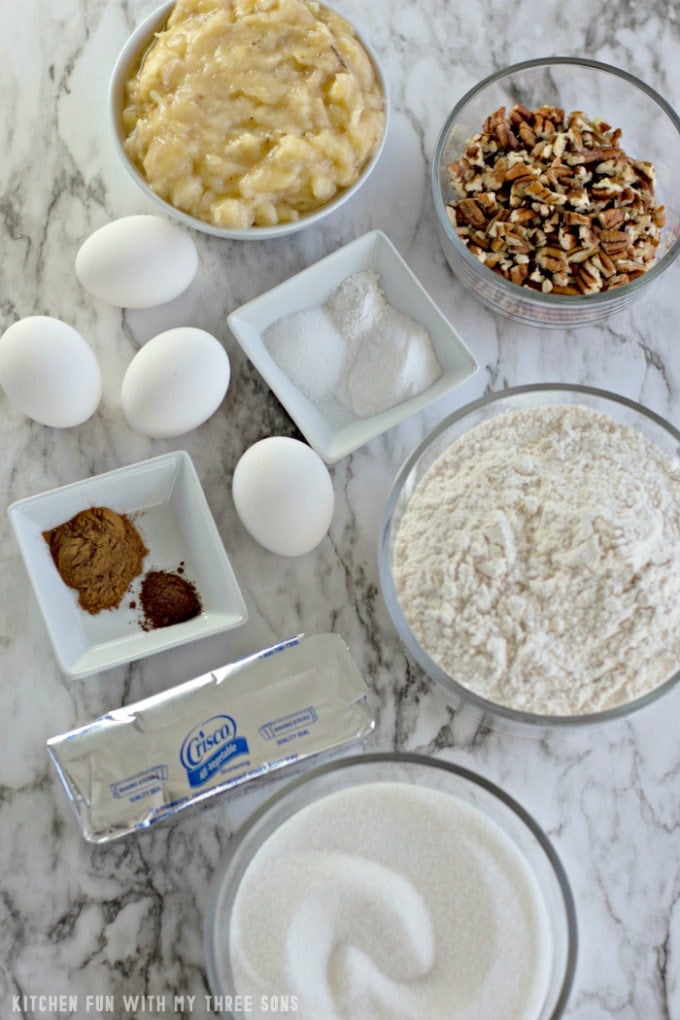 You will also need 12 half-pint (8 ounce jars) mason jars to bake the banana bread in.

Making Banana Bread in a Jar

First, cream together the shortening and granulated sugar in a large mixing bowl with an electric mixer. Add the eggs, mashed banana, and water and beat until well combined. 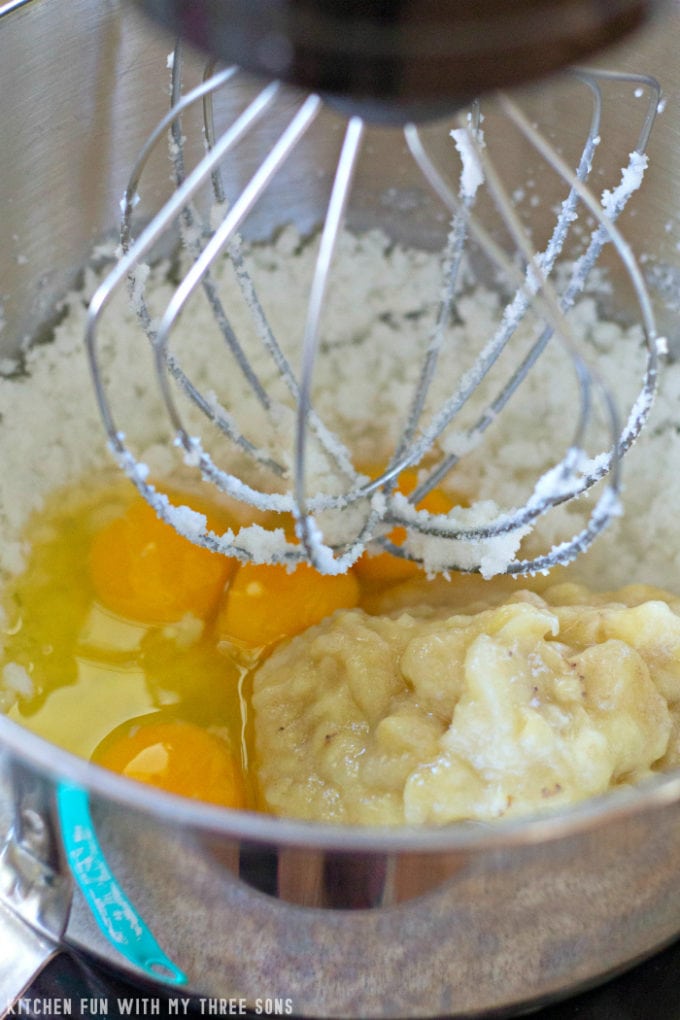 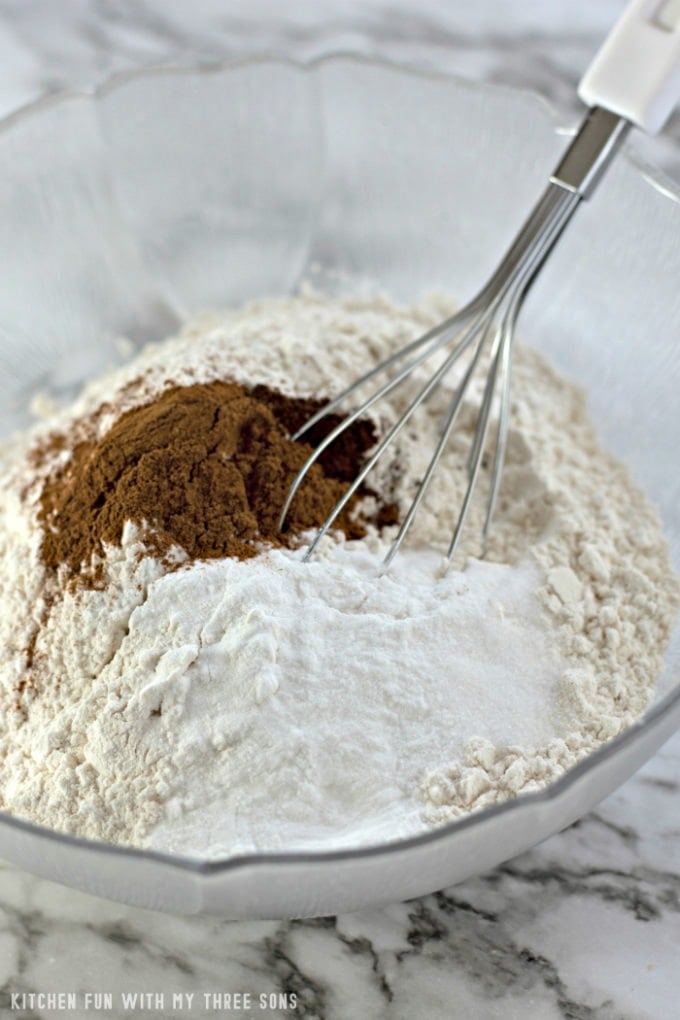 Add the dry mixture to the wet and mix well. Now, add the chopped pecans and stir with a spatula until all combined. 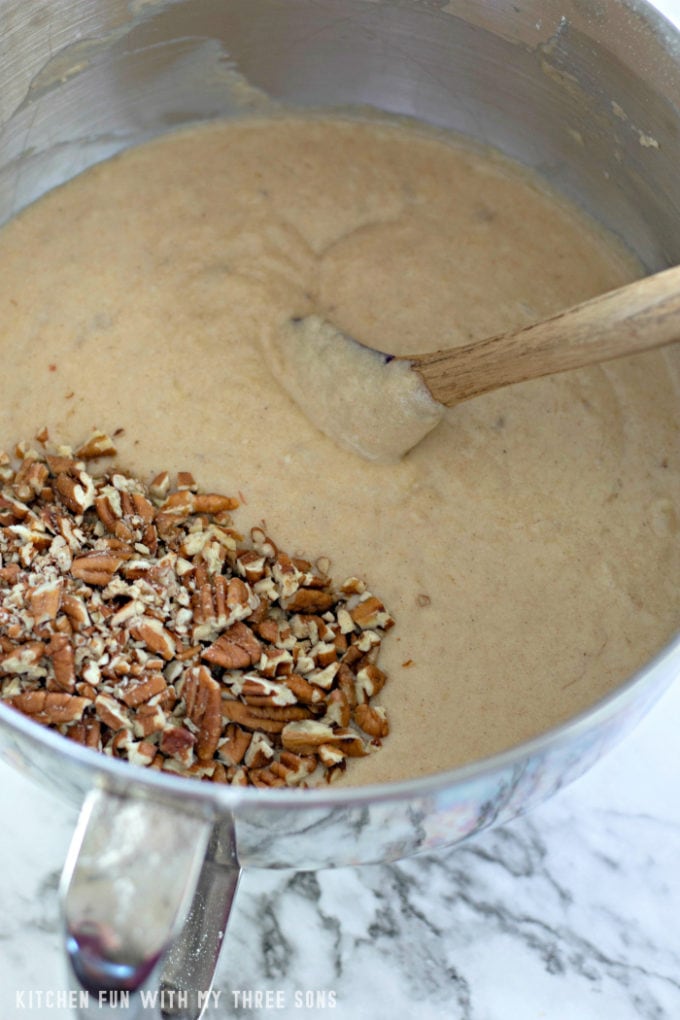 Prepare the half pint jars by spraying with non-stick cooking spray and placing them on a large baking sheet with a rim to keep the jars from sliding off the pan. Fill the jars halfway with the banana bread batter. We use a measuring cup to scoop the batter into the jars, but you could use a small ladle, spoon, or pour from a batter bowl with a spout. 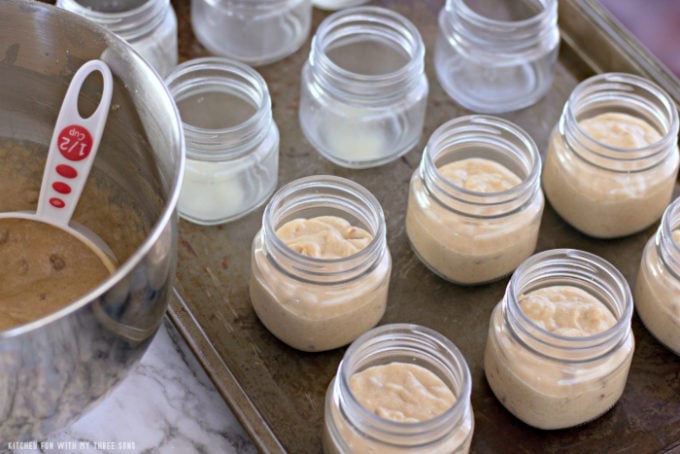 Bake the banana bread in jars (without lids) for about 40-45 minutes at 325ºF until a toothpick inserted into the center comes out clean.

While the bread is baking, sanitize the lids of the jars by placing them in a pot of boiling water for several minutes. Remove the lids from the water and set aside to cool.

As soon as you remove the banana bread jars from the oven, place the lid on top and screw it closed. Within a few minutes, the jars will seal themselves. 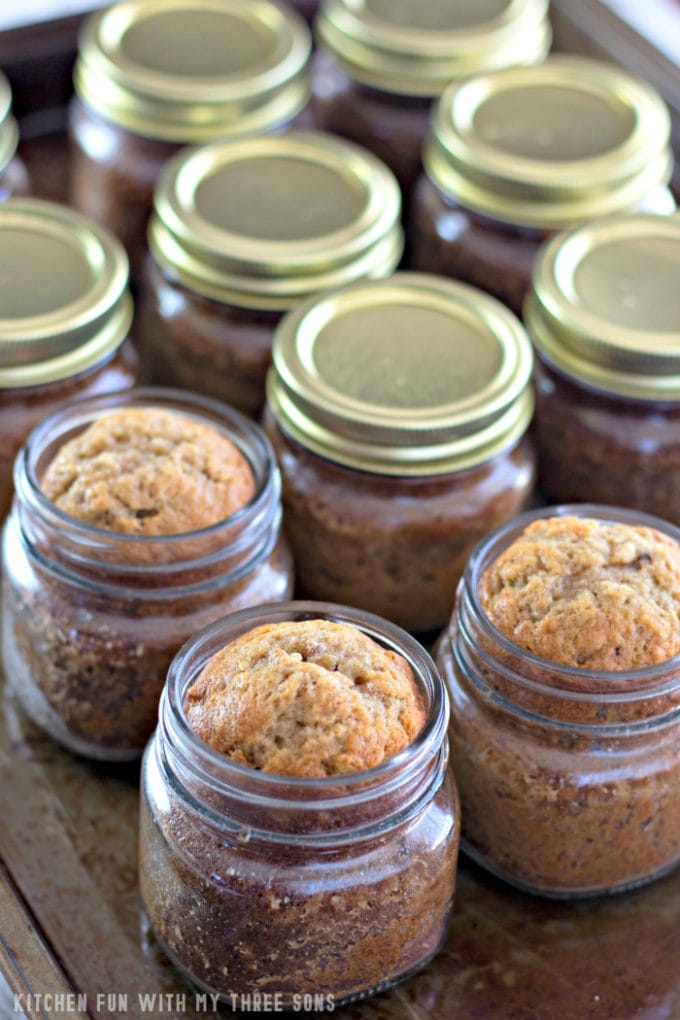 Enjoy your Banana Bread in a Jar any time, right from the refrigerator with a spoon, or scoop it out of the jar and eat it warmed up with butter. 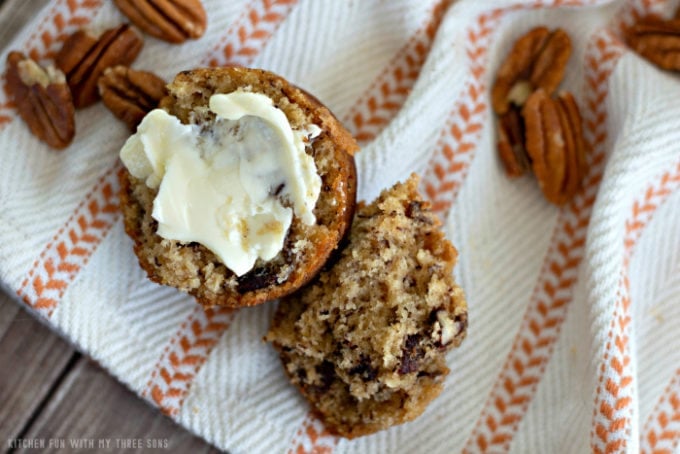 Can I Bake This Bread in a Loaf Pan?

Yes, you can! If you would like to make a loaf of banana bread instead of individual jars, follow the recipe as written, but pour the batter into two greased 9 x 5-inch bread pans and bake for 55-60 minutes or until a toothpick inserted in the center comes out clean. 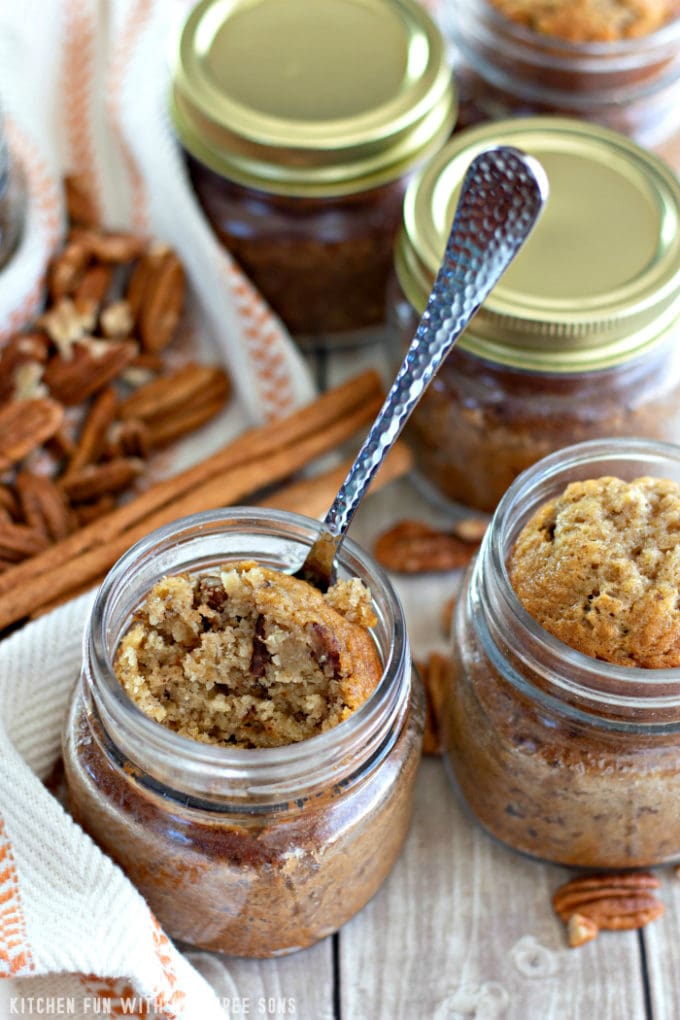 How Long will the Banana Bread be Good in the Refrigerator or Freezer?

The banana bread jars will keep well in the refrigerator for up to a week. If you would like to freeze the jars of bread, they will be good for one month. 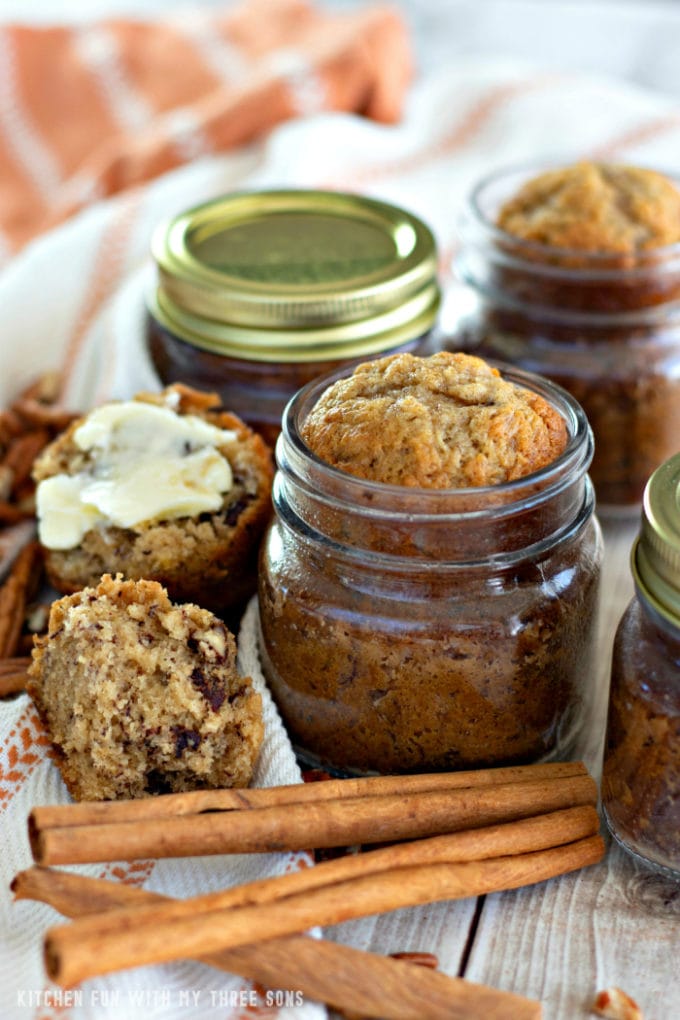 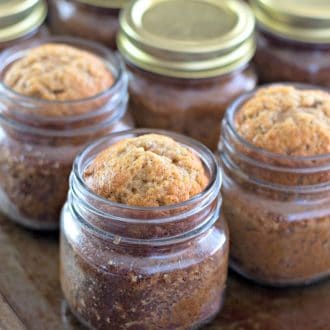 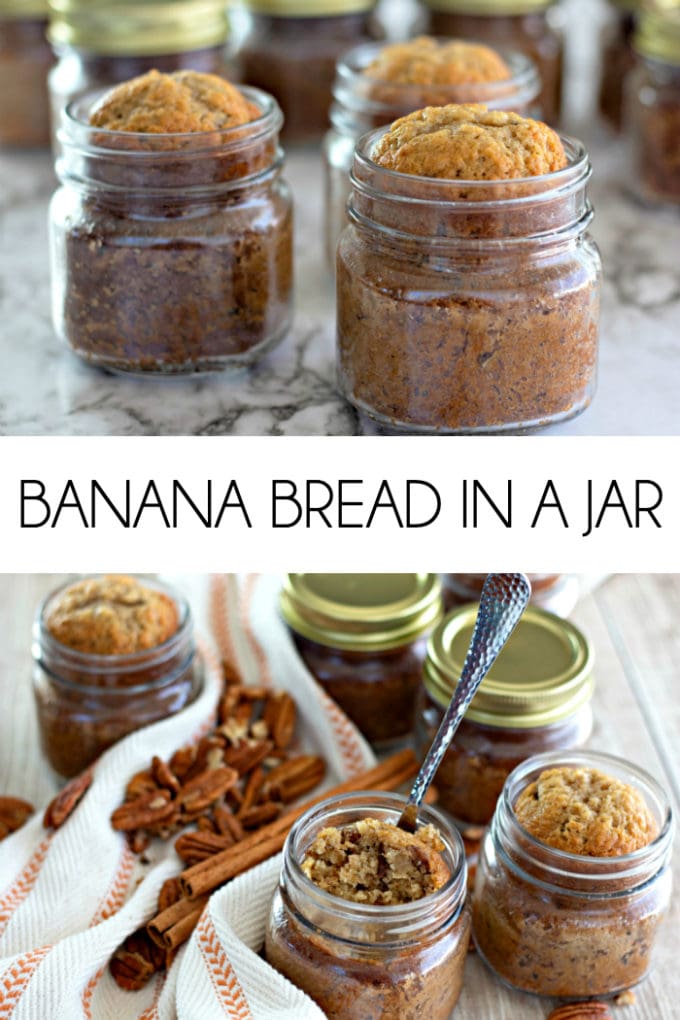 What a wonderful gift and taste awesome.

Can you double the recipe and bake them in pint jars??

What a great idea.  I will certainly going to try this.

It’s a wonderful recipe . It tastes good and is easy to make.
But please don’t put your tooth in the hot cake to try if its ready. Use a toothpick or a Kebab skewer.
M