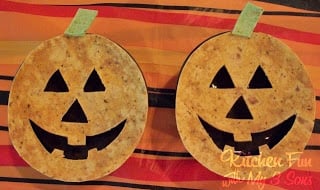 My boys are not fond of any soups. I tried this fun way of getting them to eat black bean soup the other night and it worked! They would have never tried black bean soup if it wasn’t for the tortilla shaped pumpkin. Of course I thought of the risk of them just eating the pumpkin tortilla and not taking a bite of soup, but they had to try the soup before they could eat a bite of the tortilla. They ended up loving it and had fun dipping the tortilla in the soup!

We took a veggie orange tortilla and cut a jack-o-latern out of it with a knife and kitchen scissors. Place your bowl on top as a guide. I also had spinach tortillas so we cut a stem out of that. We toasted it just a little.

Here is the recipe I use for black bean soup. I have used this one for years and I think it is by far the best I have tried….

1.Heat oil in a large pot over medium-high heat. Saute onion, celery, carrots and garlic for 5 minutes. Season with chili powder, cumin, and black pepper; cook for 1 minute. Stir in vegetable broth, 2 cans of beans, and corn. Bring to a boil.

2.Meanwhile, in a food processor or blender, process remaining 2 cans beans and tomatoes until smooth. Stir into boiling soup mixture, reduce heat to medium, and simmer for 15 minutes.

Pour the soup in a small bowl and place the pumpkin on top.

Give it a try and maybe it will work on your non soup eaters as well!

What a cute idea! I have everything to make this, wish me luck getting my kids to eat it as good as yours did. 😉

This is a brilliant idea to make kids to love their soup.

Love love love all your fun cooking! I'm your latest follower and hope to see more of your delicious creations in the future.

This is so cool! I will have to try it!

It looks delicious! I think I will be making some black bean soup soon!

This is so much fun! I have a hard time getting my boys to eat soup too. Maybe I need to invest in some fun colored tortillas next time I make soup:)

I Love when yummy food is combined with fun like this jack-o-lantern. I should try it with anything they don't normally eat. Thanks for sharing.

What a fun (and yummy) idea! My kids would love it!

Please link this to my Halloween Traditions link up! This is super cute!

visiting from tatertots and jello- how fun! love how you made dinner time fun 🙂 perfect idea to get the kids involved too- let them "carve" their own pumpkin!!!

Cute idea! There are "white pumpkins" too…so you could also you regular tortillas!