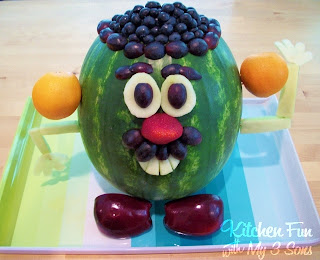 My boys loved the Mr. Pancake Head we made awhile back so we decided to make this Mr. Watermelon Head yesterday with fruit that we had in the kitchen. They absolutely loved him and he was pretty easy to make! Kids will love helping make this and it might get your picky eaters to try some new and different fruits! This would also be really cute for a kids party!

I was bad about taking pictures with this one, but will try to explain in good detail. You can click on the Yodamelon link below for instructions on how to cut out the watermelon from the back.

We first cut a small amount from the bottom of the watermelon with a knife so the watermelon would stand up straight without rolling over. We washed the watermelon really good because we were adding fruit to the outside. We cut the apple in half for the feet. We cut a clementine in half and placed those on the top sides with toothpicks. We attached on a strawberry nose with a toothpick. We cut several dark grapes and blueberries in half. We place the blueberries on top for the hat and place the dark grape halves around the edges of the hat. We placed grape halves under the nose for his mustache. They just stuck on, but use a toothpick is they slide around. We cut 2 grape halves in half again for the eye brows. We had a honeydew melon half and cut the ends off to make the eyes. Use grape halves for the pupils. We cut those with kitchen scissors. We then cut slices from the honeydew half. We cut off the peel and used that to make the arms. Secure them with toothpicks int he sides of the melon. We used extra peel to cut out the hands as well…we used kitchen scissors. We did the same for the teeth.

This was so much fun to make and such a fun and healthy treat to make with or for the kids!

Here are some of of the other watermelon creations that we have made in the past…. 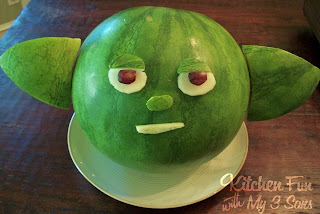 OH NO! The Turtle Turned Over! 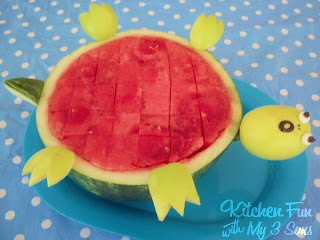 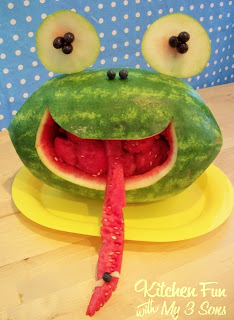 Ha, Ha! Love it! I always loved when my parents would make character shaped anything! COming to you from the blog hop. Have a great day!

wow!! these are all so adorable

would love it if you could share this on my link party – https://serenityyou.blogspot.co.uk/2012/07/serenity-saturday-47.html

Your Mr. Potato Head is not only amazing but soooooooo cute!! You never cease to amaze me with your creativity and the way everything comes together to look picture perfect! Thanks for linking up to TGIF!
Beth =-)

I’d love it if you shared this with the Fun Family Crafts audience.
FFC is similar to Craftgawker but it only features kid friendly tutorials.

Looking forward to seeing what fun crafts you submit!
https://funfamilycrafts.com

I love the yodamelon. Thank you so much for linking up at Allergy-Free Wednesdays last week. I have picked this post to be featured on AFW post today. As part of the feature, it is mentioned on my FB page and pinned on pinterest. You can find the feature here: https://willingcook.com/allergy-free-wednesdays-august-8-2012/
We hope you'll join us again this week!

Well who doesn't remember Mr. Potato Head ? Like everyone else, he's reinvented himself into Mr. Watermelon Head. You and the boys just have the best imaginations. He could also be passed off as the Absent Minded Professor. Very clever usage of all the fruit.