A survey by Aveeno Baby reports 31% of moms believe stay-at-home parents would have it easier if they went to a job outside the home.

Being a parent, whether you work inside or outside the home, is straight up hard. Parents worry about keeping them safe, about feeding them healthy foods, and whether or not eating their boogers is something to freak out about. Today we’re talking about stay-at-home parents. We’ll talk about being a parent who works outside the home in a future post.

What you need to know for sure is this: we respect, value and honor all parents. Where you work, whether inside or outside the home, we can all agree that loving your kids and raising them up to be healthy adults is what matters. 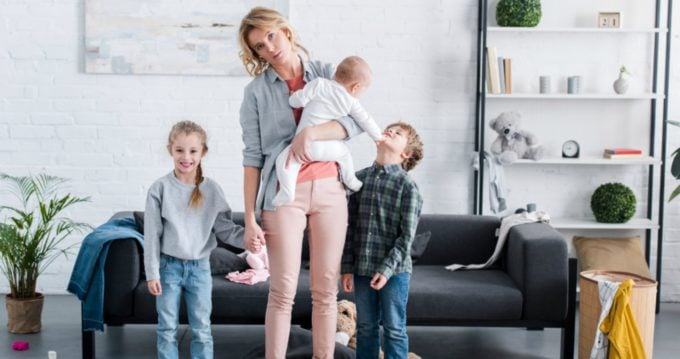 A Stay-At-Home Parent Is Actually a 24-Hour CEO

Being a stay-at-home parent is like being the CEO of a company staffed entirely by a workforce of foreign interns who don’t speak a language you understand and who have never before been around other human beings. It’s your own fault for hiring them in the first place, but to be fair, you had no idea what you were in for.

Your other CEO friends made it seem like hiring interns was the smartest and easiest thing they’d ever done. Maybe their interns are just better. They sure look that way on social media.

Remember, you can’t lay them off or fire them. They have an air-tight binding contract to work at the company for at least 18 years.

A day in the life of the CEOs at home: stay-at-home parents

1. Younger interns will throw spaghetti. You will never know why so don’t bother trying to correcting the behavior. They believe the proper way to eat spaghetti is to rub it all over their faces, making sure to get it as far into both ears as possible. Afterward, they will fling it onto the floor, walls, and your white shirt. Expect it, but don’t believe for a second that you can change it.

2. Don’t expect them to only work the day shift. No, no. New interns work when they want, and if that’s the midnight shift, so be it. Sadly their odd hours mean you’ll have to be available when they have problems they cannot solve on their own. In a related story, they can solve no problems on their own.

3. Bathrooms in your company will be horror-movie gross. Expect pee on the floor, technology in the toilet, and for reasons no one truly understands, rocks found outside and then put in the sink.

4. Interns throw up more than most. They kindly try to do it when you’re on an important phone call or at a beautiful company dinner. Grab a hazmat suit and a shovel and deal with it because your janitor quit years ago.

5. Business meeting across town? There are no meetings where the interns come from, so you can safely assume there will be plenty of screaming, demanding food, and punching people in the face because they are sitting too close. Warn the others in attendance that they should not look directly at an intern. This is seen as a form of aggression and all hell will break loose.

6. Load up the company van with roughly the same amount of equipment it took to build the Empire State Building. It’s not everything they’ll need, but it’s definitely (probably?) enough to get through a 14-minute conference.

7. Never attempt to feed the interns anything that is not in the shape of a dinosaur or Elmo’s face. They will rise up as one and burn your company to the ground.

8. Interns drink only from red cups or blue cups. Do not, under any circumstances, offer any other cup. In their culture, all other cup colors are coated in broccoli juice and old toothpaste.

9. From time to time, one of the interns will lose a tooth. Maybe it has something to do with their rampant consumption of food shaped like a puppet’s head. In any case, they believe that a dangling tooth held by a lone tooth string is to be protected by any and all means necessary.

You can try to convince them to pull it out. You won’t. Your only hope is to wait until it falls out. That can be anywhere from 1 hour to 7 months. They’ll expect a bonus in their paycheck for that same tooth because they believe their teeth to be highly valuable.

10. The interns bring with them a keen eye for spotting invisible thieves. When you find your desk sawn in half, your personal belongings broken, and a pile of feces on the floor that you desperately want to believe is from a dog that you don’t have, it’s no mystery. Someone broke into the company when you weren’t looking and wreaked havoc. Your interns saw the whole thing.

If you feel it’s easier to go to a job outside the home than to be one of the millions of stay-at-home parents, that’s great. That’s your experience. You need to be reminded that YES, parenting is stinking hard. And, YES, some days you’d rather do almost anything else.

Surround yourself with as many folks in your life who will support you, help you, and encourage you. Take breaks when you can, and vent to your friends.

And hey, if no one has told you today, you’re priceless. We see you, we appreciate you, and we respect you. Hang in there, stay-at-home parent. You can do it.