Every animal and pet are cute each in their own way; however, some are just too cute we have to share about them! Check out this blacknose sheep that looks like a stuffed animal and is a great pet to have around! You will be sure to want one after seeing this. 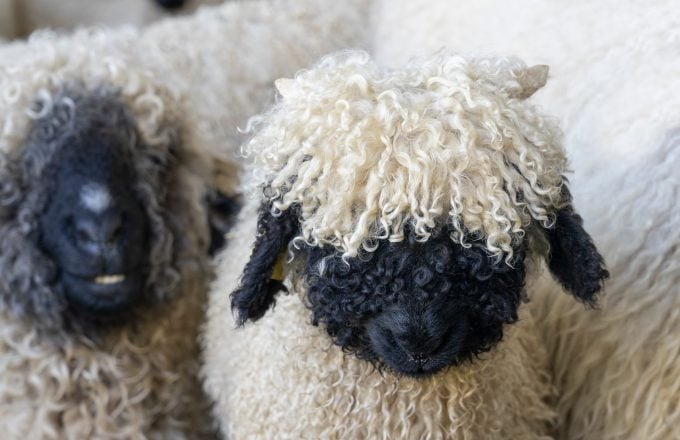 These blacknose sheep are from the Valais region in Switzerland. They are a domestic type of sheep. It wasn’t until 1960 that they were recognized as unique, even though they have been around since the 15th century.

Blacknose sheep are bred both from their wool and their meat. However, they are also super friendly and love humans, which is why they would make such a fun pet to have around!

Take a look at these pictures from New Zealand. Then, I’m sure you’ll understand just why they were named the cutest sheep in the world!

Their wool measures about 39 microns and a staple length of 100mm. They make 4 kilograms per head every year of wool! Due to the coarseness of their wool, it is mainly used for carpet or felt.

They would also make really good pets because they are so calm and friendly. Blacknose sheep are also very easy to tame and maintain. They would be a great addition to any home. Your children can learn how to raise them and take care of them due to their kind nature.

You guys!!!! This is a Valais Blacknose sheep (Or in German: Walliser Schwarznasenschaf), a breed of domestic sheep originating in the Valais region of Switzerland.

Beautiful sheep ,, but how often do you do you have to shave um down?? & must it be done ? Thanks so much fur sharing.

They have to be sheared every spring, some sheep get sheared twice a year. You either have to learn to do it yourself, or hire a shearer who would charge and arm and two legs to come out shear one sheep.

We have our sheep sheared in the Spring right after Mother’s Day and it doesn’t cost that much. Our shearer is from Australia and he charges $10 per sheep and a trip fee of $40. Less than the cost of having a dog groomed.

IVE BEEN LOOKING TO PURCHASE SOME OF THE VALAIS SHEEP, WHERE CAN I FIND THEM IN THE US?

How much for these cute babies

how much do these sheep cost where do get them?

Important Note: Sheep are flock animals & do not do well alone. If you are interested in Blacknose, get at least two, preferably more. Sheep are farm and field animals & need a shed or barn for shelter & a pasture for grazing. Not the same as having a cat or dog.

How much are they didn’t see answer

We use to have a wirehaired dachsund almost like yours. She was 10-1/2 when she developed diabetes. She loved to find snakes and rats.

Yes,plus where could you find any here in Michigan USA

We raised south downs, Hampshires, Romney’s breeds and the South Downs especially were  cute as lambs but at yearlings looked much more like a pig. Lol do these sheep stay cute even as adults.

Hello you would like to know my thoughts on those sheep’s or lambs. Well you right they are cute They fun to watch for hours to come What didn’t know They came New Zealand  I would like know where can you get some to breed and great for having petting farms

If they are anything like regular sheep……… I would not be wanting any for a pet. There is a reason sheep are known for being the dumbest animals on earth. I have raised many lambs when the ewe refused a lamb. they are adorable but then they grow up and not so fun.

If I lived on a farm I would love to have a few of these little cuties.