Home » Tips » The Kind Bus Driver We All Want to Hug

The Kind Bus Driver We All Want to Hug

Before you read this story about a very, very kind bus driver, here’s a warning. Grab your tissue and make sure you have your kids within hugging distance.

“When I was a boy and I would see scary things in the news, my mother would say to me, “Look for the helpers. You will always find people who are helping.” – Fred Rogers 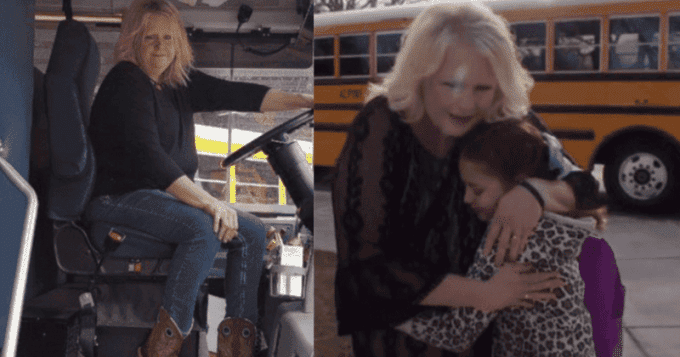 The Kind Bus Driver We Want to Hug

A sweet 11-year-old girl named Isabella Pieri lost her mom when she was 9. It was an awful time during which Isabella’s dad was struggling with the loss of his wife, and of all the things she did for the family.

One of those things was to take care of their daughter’s hair. He was out of his element and seemed to be making things worse. His daughter would cry when he’d accidentally pull her hair.

“I originally just gave her a crew cut because I didn’t know how, and it was all tangled and I couldn’t get it out for anything,” he told the local news station. “She’d get mad at me for pulling her hair. I didn’t know how to do it.”

When Isabella’s hair began to grow back, she started pulling it up into a ponytail. One day, her dad said, she came home with a different style than her usual ponytail. Her hair “looked beautiful,” he said.

Turns out a very kind bus driver was behind it.

Tracy Dean is Isabella’s bus driver and apparently she has a heart as big as…well…a bus!  When Isabella mustered the courage to ask Tracy for help with her hair, everything changed.

“I can tell she was struggling with her hair,” Tracy told ABC News. “We usually do two French braids first and once in a while she just wants one braid. I also taught her how to brush her hair. She’d get on the bus and she’d say, ‘I brushed my hair. Does it look good?’ “I’ll say, ‘You did awesome.'”

The best news yet.

Isabella’s self-confidence is way up, says her Dad, “which is what I’ve been intending.” So glad to hear this. What an incredible, much-needed boost for this sweet little girl.

After losing her mother at nine years old, Isabella Pieri learned to get ready on her own, but had a hard time with her hair— bus driver Tracy Dean’s simple act of kindness gave Pieri new confidence. @LesterHoltNBC has the story. pic.twitter.com/FhuUwuYsHs

We can all do at least one kind thing each day.

Tracy has made a big difference in the life of a little girl without a mom. It didn’t cost any money and took nothing away from her, but the impact will go on and on.

What can each of us do to impact a child’s life in a positive way? This story is a good reminder for all of us to take a look at ourselves and see if there is more we can do for those around us. Thank you for the lesson, Tracy.

We need more caring and empathic people in tjis world, like the bus driver that is mentioned.
God bless the children anf role models.

That is a great thing to do for a child. I was a special Ed driver and some mornings I would get up early just so I could go this this one child’s home and get her to brunch her teeth and wash her hair and style it. I did this for many years even though the child had parents they never did this for her. When another mother did her child’s hair and it started to fall out I would turn on my butane curling iron and redo her hair. She loved that.
So it just goes to show you that you we’re not the only one who cared for her precious cargo.
So  Cudo’s to you and drivers who do this for our precious cargo. God Bless

What a wonderful act of kindness and such a heart warming story, Kudos to this bus driver for having insight and knowing what she could do to make a difference in this little girls life..

Bless them both. We need more females and female bus drives to do something from the heart like this.

This is a very heart warming story. She is living the life Jesus wants us all to live, in his likeness. Do unto others as you would have them do unto you. Without asking for anything in return, without asking for any recognition. Congratulations to her for being the best person she needs to be for our Father in heaven. He will truly say well done faithful servant, well done.

Beautiful story of a kind woman

Awesome story, such a kind hearted lady. I wish someone had done this for my granddaughter when her Mom passed away. She was 11 & I know it was really hard on my son. He was left with two children. A little kindness goes a long way!

What a great woman to help this adorable girl who is struggling to get by with losing her mother at such a important time of growing up . Gave me goosebumps and hope there are other people who see these situations and can help change a child’s life for the moment. What a great person and making a difference in this young girls life!!

My mom used to drive bus. I still see people back home who say I look like her and talk about her as if they are talking about an angel.  I lost her when I was 5 so I know exactly what little Isabella is going through. Bless these kind souls

So heartwarming to know that kind people still exist and help others without expecting anything in return. Bless you you wonderful Bus Driver, thank you for having a kind heart!

Just what Jesus would do

Please send this to the Ellen show, she always has people on her show that are just great human beings. I would love to see her on her show

Tracy your a beautiful woman and a awesome bus driver so kind and caring to the kids, we need more kind and caring people in this world have a wonderful Christmas and a happy new year ♥️