Your Middle Schooler Probably Shouldn’t Be On Social Media

No matter what you think of middle school social media use right now, you should take a couple minutes to read what experts have to say.

Once parents are equipped with all the facts, it can definitely help them to make the right choice for their kids. 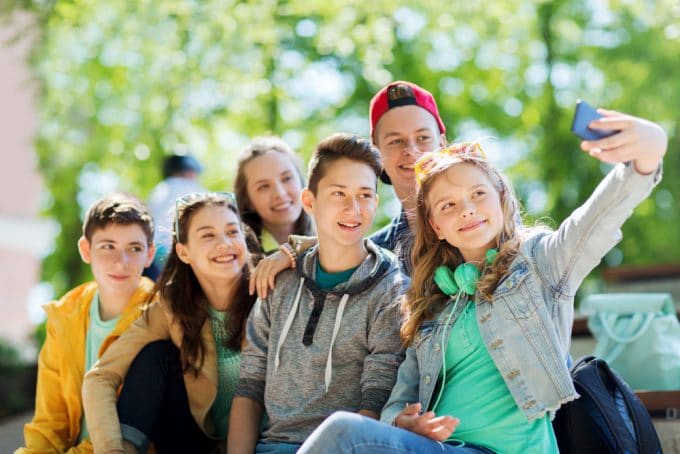 “This brain region has been implicated in planning complex cognitive behavior, personality expression, decision making, and moderating social behavior.” – The Science of Psychotherapy

There are way too many scenarios on social media that require self-control. Tweens aren’t yet equipped to navigate those things thoughtfully and responsibly. The limitations of their young brains may overrule what smart parents say.

2. Social media may negatively impact their understanding of friendship.

Ask yourself how your middle schooler can understand what it means to have good friends when they have 300 Facebook friends?

I think it’s already hard enough to learn about friendship when there are only a handful of people in the real world who fall into the “friend” category.

Imagine being eleven and trying to learn that life lesson with the bombardment of hundreds of social media “friends.”

One study from 2009 says that 28% of middle schoolers are bullied online. I wouldn’t be at all surprised to learn it’s higher now.

When something comes on the news about a young child being bullied online to the point of hurting themselves, I ache. I’m sure you do, too.

If you want to protect your child from sexually inappropriate material online, you’ve got a big job ahead of you.

The same study I cited above says: “40% of both boys and girls reported having encountered sexually inappropriate material on the Internet.”

I’m super vigilant about my own social media accounts and even I have seen numerous sexually inappropriate pictures on Instagram and Twitter.

It doesn’t matter whether it’s intentional or accidental. Seeing something sexual online can absolutely destroy a child.

Is Your Middle Schooler Already On Social Media?

There are things you can do to try and minimize the chances of a bad experience for your child and keep them safe.

Talk about your expectations regarding their behavior.

To help protect kids from predators, make sure the account is private and can’t be found in search engines.

Friend requests must go through you.

You should have the power of approving or blocking.

While this may be how they feel, we parents have to find a way to convince them they won’t be in trouble for talking to us.

Get all the login information.

If your child locks you out of their account, it’s time to shut it down.

They don’t need to be on Snap, Insta, Twitter, Facebook, etc. Let them choose one. Yes, they’ll complain. Good news is parents are tough and we can live with complaining.

Specifically, it’s important to establish hard rules about when your kids can get on social media and for how long.

Try to only allow social media use when you or another adult can see what kids are doing.

For example, hiding what they’re saying or doing on social media should come with consequences.

What’s your opinion about middle school social media use?

Do you forbid it, or do you think it’s okay if you monitor it? How do you manage their behavior? Have you had situations that caused you concern?

Tell me about it in the comments. I’d like to hear your story.