The Movie Theater That Allows Wine, Whiskey, and Dogs

If you love going to the movie theater, but often feel stressed out by the chewing, chatting and all around annoying behavior of other movie-goers, this is for you. 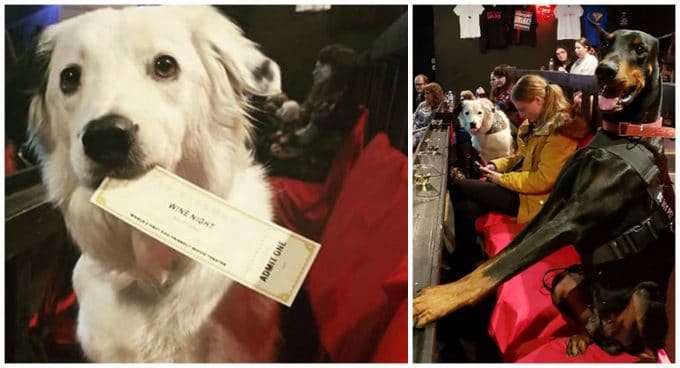 In Plano, Texas, a new theater recently opened and I’m pretty sure it’s the best thing to happen to movie theaters since talkies replaced silent films.

K9 Cinemas is all about chilling with your pup. That’s right. It’s a movie theater that loves dogs and dog-themed movies. They also appreciate the joy that is a nice glass of wine.

Every adult who purchases a movie ticket and brings their dog gets both free wine and whiskey!

Hold onto your dog leash because the wine is bottomless and while the whiskey isn’t, we think the 4 shots they offer are plenty. That could probably get most people through a dog-themed movie in which at least one human cries.

We don’t think we’ve ever seen a movie with dogs in it that doesn’t make us either sob or plot to adopt every single dog at the pound.

Drinks not working for you? Still feeling like crawling over the seat to have a chat with the person two rows back who is talking to the screen?

Never fear. Your fur-baby is near. If petting their soft fur doesn’t calm you down, you should probably stay home and watch Netflix.

What’s Playing At the K9 Cinema

According to the website, a surprise dog-themed movie will be announced the night of your movie so you won’t know until then. The movies are a little older they say, not new releases, but we think that’s just fine. There are oodles of movies that both humans and dogs can love together.

We’re not 100% sure what constitutes a movie that’s canine-friendly, but a wild guess is that there probably aren’t any super loud noises or cats.

Okay, so we made up the part about the cats. Sorry, but we can’t think of a dog alive who enjoys the Dreamworks film Puss & Boots.

What You Need to Know Before You Go

Adult tickets include the admission of one fur baby to join you. Maximum 2 dogs per human.

The site says you need valid papers from your vet on your first visit. It doesn’t say what those papers are, but we can safely assume they are talking about shot records.

Your pup needs to be on a leash. Makes sense. The last thing anyone wants is for Fido to make a dash for the screen to chase a ball. There are some parts of the theater where that isn’t necessary, though. Look for signs.

You will be responsible for cleaning up. If your puppy makes a poopie it’s your job to clean it.

There is a waiver that must be signed. Sorry, but you’ll have to be the one to put your autograph on the dotted line. We know your dog is smart, but they can’t sign waivers. It would be so cool if they could, though.

Postal workers everywhere would be thrilled to get dog signatures for deliveries instead of bites!