Twice Baked Potatoes are cooked to perfection with crispy brown skin and mashed potato filling in the center topped with cheese and bacon. Quick and Easy to Bake or Grill.

This recipe is a little more in-depth and may take more of your time, but the results are worth the wait! These delicious and flavorful potatoes are perfect for any meal or even enjoyed by themselves. Potatoes are already an addicting food and this recipe will just make you want them any chance you can get!

Potatoes: I like to use russet potatoes because they are a decent size to make a good amount of filling and crispy skin. You will need potato flesh as well as potato skins.

Seasonings: I use salt, onion powder, and pepper for my seasonings, but feel free to add additional seasonings for flavor like old bay, oregano, cajun, etc.

Chicken Broth: I prefer using regular, but you can use low sodium or milk.

Bacon: You can use premade bacon bits, but I prefer to chop up 8 slices of my own bacon for the topping.

Cheese: I use shredded Colby Jack, but you can use cheddar, Mozzarella, or any other good melting cheese.

How To Make Twice Baked Potatoes

Step 1. Set the oven to 375 degrees and clean the potatoes. Use a paper towel to dry them and set them onto a plate. Use a fork to poke holes into the potatoes about 3-4 times. Add Olive oil onto them and coat completely. Add some salt and onion powder before placing it into the oven for an hour until tender. Let the potatoes cool slightly. Once the potatoes are cool enough to handle, you can slice them down the middle length-wise. You can cut each of them in half to make 8 potatoes if desired.

Step 2. Use a spoon to scoop out the flesh of the potatoes and place them into a mixing bowl. (You will need about 4 cups) Put in the salt, pepper, and onion powder, and combine using a hand mixer until fully incorporated. The texture won’t be smooth yet. Put in the sour cream, bacon, and 1 cup of your preferred shredded cheese. Place some more cheese and bacon on top.

Step 3. Add the prepared potato filling into the potato skins for twice-baked potatoes or potato skins.

How To Make Potato Skins

Step 4. Brush the potatoes with some butter and bake alongside the twice-baked potatoes. Set the stuffed potatoes onto a baking sheet and place them into the oven for about 15-20 minutes until all the cheese is melted.

Can I Grill Twice Baked Potatoes?

Yes! You can bake or grill these potatoes! You can follow this one step for grilling and then continue with the remaining steps above. (Note: The size of the potatoes will determine the amount of time they have to grill. You will know they are cooked when the skin is crispy and it feels tender.)

For Grilling: Place the grill on indirect heating and allow it to warm to 400 degrees. I normally will close the lid while it preheats for about 15 minutes until the temperature is even inside the entire grill. Cover the grill with the lid and allow the potatoes to cook for 75 minutes or until you have an internal temperature of 205 degrees. Once cooked, take them off the grill and allow them to cool. To melt the cheese on top for the final step, allow the potatoes to cook for an additional 20 minutes.

What To Serve With Twice Baked Potatoes?

Potatoes are something that goes very well with all sorts of amazing dishes. I love enjoying my twice-baked potatoes with burgers, chicken, steak, casseroles, salads, hot dogs, sausage, etc. 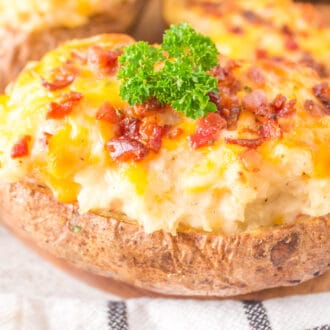 For the twice-baked potato filling

For the baked Potatoes: