Home » Tips » Video Game Addiction: Everything You Need to Know

Video Game Addiction: Everything You Need to Know

Are you worried that your child might have a video game addiction? It’s called gaming disorder and it’s very real. 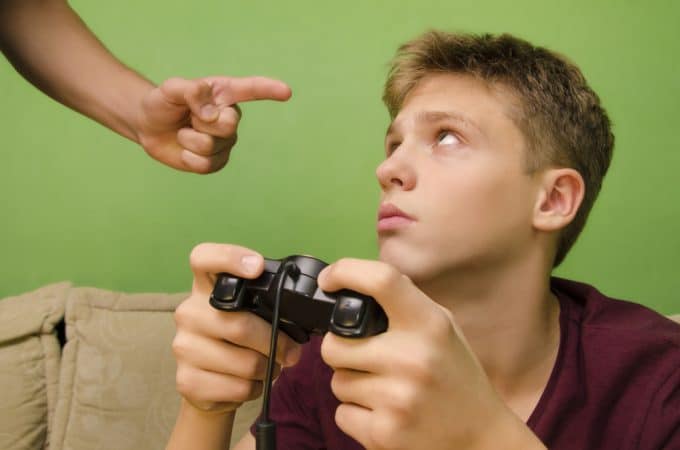 The World Health Organization, in the 11th Revision of the International Classification of Diseases (ICD-11), has defined gaming disorder as “a pattern of gaming behavior characterized by impaired control over gaming, increasing priority given to gaming over other activities to the extent that gaming takes precedence over other interests and daily activities, and continuation or escalation of gaming despite the occurrence of negative consequences.”

One of the scariest things I’ve read about video game addiction was a study by California State University. In it, they report that MRI scans show that video games can have the same effect on your child’s brain as alcohol or drugs.

Playing a game lights up the reward system in their brains. It feels good to do well, and all the sounds, lights, and colors that go along with it make them want to have that feeling again and again and again.

Also, just like an alcoholic, a video game addiction can change the life of the people around the player in a negative way. If you’ve ever battled with your child over how long they can play a video game, you know exactly what I mean.

Take a look at these 9 questions. Are your answers concerning to you?

1. Does your child spend more time playing video games than any other non-school activity?

2. Is your child’s school work suffering because they spend so much time playing video games?

3. Is their personal hygiene suffering because they won’t stop playing a video game?

4. Do they have friends they hang out with that aren’t online?

5. Do they spend time with their friends doing something other than playing video games?

6. Do they often become angry when playing a game?

7. Are they missing sleep because of video games?

8. Do you have trouble getting them to do things that don’t involve gaming?

9. Have you noticed they are depressed or short-tempered?

10. Have you caught them in a lie surrounding playing a video game?

How much time does your child spend gaming?

If you don’t know, you should track their playing every day for a week to see what kind of time they are actually spending.

Although there is a lot of back and forth among experts, there are no agreed-upon hard and fast numbers for how much is too much game time.

My two cents? If you track their video game time and see that they spend more time playing than you personally think they should, it’s a problem.

What should a parent do about a possible video game addiction?

Step one is to cut back on the time they are allowed to play. They aren’t going to like it, but kids don’t like most of what their parents do when it comes to keeping them healthy.

Vegetables, doctor’s visits, exercise, flu shots – these are all things most kids dislike to some degree. Our job as parents is to make them do it anyway because we know that is what’s best for them.

Step two is to use those parental controls on your child’s devices. They are there to help you do just that – control. I’m always surprised at the number of parents that don’t know what they are or how to use them. It can be confusing. To find out how to set them up on your child’s device, do a quick Google search.

Step three is to visit with your child’s doctor. What is their opinion of how much is too much time spent gaming? What do they suggest parents do to prevent or solve a problem?

If you feel it’s right for your child, you can also consider having them see a therapist.

Quick tips for parents of gamers.

Set clear rules for how much time they are allowed to play.

Monitor their time playing games and track it.

Use a timer to alert them that game time is over.

Tell them upfront that the “I’m in the middle of a game” defense is not acceptable.

Have easy to understand consequences for kids who don’t follow the rules.

What are your tips for managing your child’s video gameplay?

I believe that other parents often have the best advice about challenges we all face with our kids, don’t you? If you have great ideas, tips, tricks, for managing your child’s video game time, it would be so great if you’d share.

I’m sure that many readers face this same battle with their kids and have found a way to deal with it in a really clever way. I look forward to reading your advice.

The first stupid piece of advice is to ask the doctor. The parent/parents should from infancy included the child in character building family fun chores. When done together at first and then taken notice of with appropriately sincere praise, the child will not have to withdraw into the world of extreme video. I have two children that went through a mild video interest and quickly out grew it. I am still proud of the responsible people they are!

I give my son time and tell him about 30 minutes before we have to go and I say “one more match, when you die, we need to go”. He fussed at first but getting grounded from it was way worse. He gets off pretty good now. I still hate him playing but I tell him about the consequences often. He doesn’t like being told,”you have to get off right now” I’m still not ok with him playing so much so I still try to limit it.

Great article. My only comment is that it’s okay to respect that a child is in the middle of a game. It causes LESS anxiety and obsession if we respect them in that way than if they feel frustration for not being allowed to finish. A 10-minute warning before time is up should lessen the frustration all around. But since we ARE allowing them to play games, it’s also okay to respect them as human beings. We then teach them to create real limits and shut-off times which eventually leads to their ability to create those for themselves in their own lives and in other situations. Better to learn how to be independent and decide upon a reasonable stopping point than to learn ONLY how to be limited if someone else is limiting you. As far as boundaries, my kids cannot game during weekdays UNLESS they are gaming in person with friends. This keeps it social and naturally creates some limits. That has worked well for us and keeps the kids balanced.