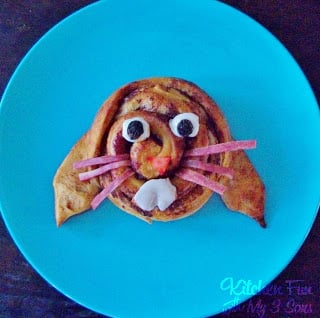 We made these fun and easy Cinnamon Bunny Buns! We made this fun bunny using one Pillsbury Grands cinnamon roll. All you do is pull out the rolls from any canned cinnamon rolls. Pull off 1 roll and unroll it. Cut it in half. Roll one half back up and lay the other half on top
with it hanging off of the sides. Cut the ends into a point. Bake as directed.

We cut up a piece of turkey bacon for the whiskers. We cut 1 strawberry for the nose and squeezed on the frosting for the eyes and teeth. We also used raisins for the eyes. This was a lot of fun to make and the kids won’ t even notice that you used less than half of the frosting!

You can check out all of our other Easter fun food creations HERE!!

Oh my goodness these are adorable! I love any excuse to make cinnamon rolls! Glad to know I'll be making an Easter version soon!

they say most living things air and water…I need cinnamon rolls. HOW FUN!!!!!

Those look so fun! You've been "tagged", stop by my blog for details 🙂

These look like they would be so much fun to make!

So clever and fun.

Your bunny bun is precious! I'd love to have you link it up to my Springtime Holiday Link Party! https://michellepaige.blogspot.com/2012/02/springtime-holiday-link-party.html
Thanks, Michelle

So cute! Thanks for linking up to TGIF! See you tomorrow =-)
Beth