When it comes to his children, Dax Shepard told US Magazine, that he has a rule to never lie to them, no matter how hard it may get. So, when the topic of Santa came up, that was a hard topic they had to face. “This is going to be very controversial,” he said.

Both of their two daughters had already sat on Santa’s lap, and neither had that great of an experience. Kristen told Today, “It was the obligatory picture where both girls were crying. One girl was hysterically crying and the other one was sort of giving him the stinkeye.” We all know exactly that type of picture as all our children have gone through that stage! 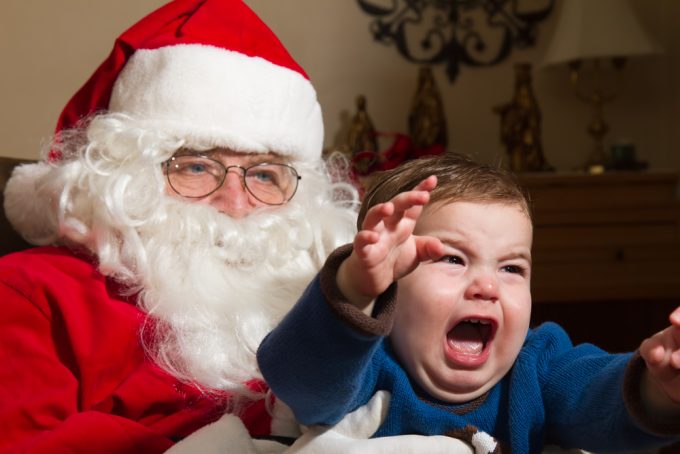 What Did They Do?

Kristen never wanted to portray Santa and the legend behind him like she was taught growing up and as we all traditionally know him. She shared, “We have to tell our kid that one night a year breaking and entering is OK and that a dude in a jumpsuit is going to come down the chimney and is going to rifle through our stuff, but it’s OK because he’s going to leave us gifts? That’s a crazy story to tell your child.”

So, when their daughter Lincoln started to question about Santa Clause, they told her the truth. As Dax put it, “I’m like, ‘you know what? This is just a fun thing we pretend while it’s Christmas.'”

They told the truth and did not lie and kept their word, even when it came to Santa. And guess what? Their kids like him even more now that they know! They still kept the fun and magic of it all while not lying to their children.

So, how did you tell your children that Santa was not real? What will you do when that comes around? Will you be like Kristen Bell and Dax Shepard and tell your kids that Santa is not real early on?

His answer was GREAT!It’s a fun pretend for Christmas!
I too refuse to lie to my kids. I want them to ALWAYS know I am a solid source of truth in their lives.
Life is hard enough, parents should be a secure place for kids.
Plus for believers in Christ teaching Santa should be a conflict.

I totally agree, that is not what it’s all about. I applaude you all.

santa is real, some people just don’t how to step up

let’s teach them that their parents don’t everything and if you can’t Touch it, it’s just pretend.

I GUESS SOME PEOPLE NEVER GET IT.