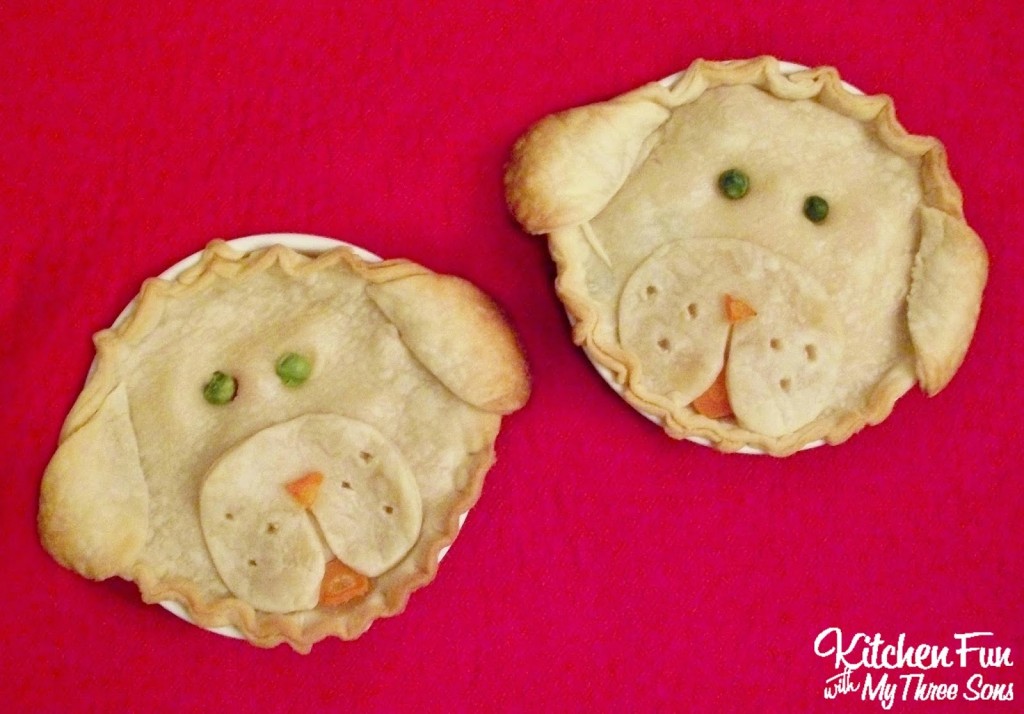 My boys have never been a fan of chicken pot pies and I try to find creative ways to make it fun for them to eat it. It really works on my 5 year old. My 8 year old can not stand carrots and peas so is not thrilled with a pot pie no matter what it looks like! At least this works on one of my kids and I think these Puppy Pot Pies turned out SO cute! In fact, this has to be one of my favorites out of all of the things we have made. Also, this is THE BEST chicken pot pie recipe that I have ever made and i have made a lot of them.

This is very easy to do and will only take about 5 to 10 minutes extra to make the puppy face. My 5 year old LOVED it and woofed the whole thing up within minutes which is amazing for him.

We made Piggy Pot Pies back in July and a better description of the recipe is on that post if you need one or just want to check them out.

1 can of chicken broth

Chop up your celery and carrots. Put your chopped veggies, peas, and diced chicken in a large pot and cover with water. Bring to a boil for 15 minutes. Remove from heat and set aside. Save about 8 carrot slices and 8 peas for the puppy face.

Roll out your pie crust. We used 4 (6oz) souffle dishes. Place the souffle dish on the crust and cut a circle with a inch or so beyond the dish.Place the bottom crust in the dish and press on the bottom and sides. There should be some of it sticking out around the top. Save the pie dough scraps to make the face and ears. In the saucepan over medium heat, cook onions in butter until soft. Stir in flour, salt, pepper, and celery seed. Slowly stir in chicken broth and milk. Simmer over medium-low heat until thick. Remove from heat.

Place the chicken mixture in bottom pie crusts and pour the flour/milk mixture over the top.

Cover with the top crust, seal edges, and cut away excess dough. Press down on the sides a bit to prevent any of the mixture from coming out. We pinched ours to make it look like puppy hair. We made 2 small holes in the top where the eyes would go and the nose to allow steam to escape. Here is what the filled pot pie should look like with the top on and off… 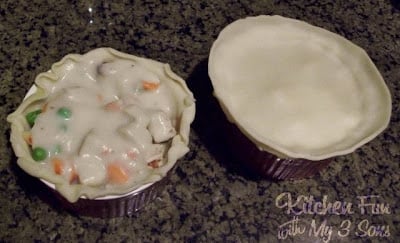 Roll out the dough scraps and cut out 4 smaller circles for the nose. Cut out 1 ear and use that as a guide to cut out the rest. Poke a few holes on each side of the nose cut out and cut a slit down the middle. Place the saved carrots on for the nose and tongue. You could also cut a heart out of the carrot for the nose (I thought of that after we already made them). Put on the peas for the eyes and place the nose cut out on the face. Press on the ears. Some will hang off the side.

Bake in the preheated oven for 25 to 30 minutes, or until pastry is golden brown and filling is bubbly. We did cover ours with foil in the middle of baking to prevent over browning.

We hope that you love them as much as we did…WOOF WOOF!

You can view all of our other fun Animal creations HERE!

Your pup pies are dalring!

Reply
Robin @ Bird On A Cake

Yet another awesome creation! I absolutely LOVE these! Thanks for the recipe. :0)

they are so stinking cute! (not to mention i l-o-v-e pot pies 🙂

These are so cute! I really might try these! I run an in-home daycare and I love doing fun things like this with the kids! Last week we made our own pizzas starting with grinding the wheat! they loved it and they came out quite tasty! I am going to start following your blog, I love meeting new people with similar interests and sharing ideas!

I would love for you to stop by and check out some of the things I do with the kids! Also we just opened our very first Link party: Natural-Nifty Linky Party #1 I'd love for you to go link this up!

That's an AMAZING creation – I will totally have to try it even though I tend to shy away from things that seem moderately complicated… might be too cute to pass up!

i love this idea.. I am going to veganise it… and do it with my son…

OMG this is delightful! I have to try this out. Talk about making dinner fun!

I love this idea. Do you think I could use a muffin pan?

I think a muffin pan would be too small. You could just make a big one in a regular pie pan if you don't have the souffle dishes.

Reply
Tales of a Trophy WIfe

Very cute-we made piggy ones.

How cute are those! My 3 year old would love it! I'll be back on Friday for your link party!

I added you to my link party list. Yippie!
-Heather
@ http://www.made-famous-by.com

They are almost to cute to eat, but I am sure I could manage 🙂
Love your recipes.

These are so cute! If that helps them eat veggies, go for it! : )

Reply
The Mommies Made Me Do It

OMG, these are adorable!! My son would get a kick out of doggie pies!
New follower here from the TGIF Linky 🙂

Your Pot Pie's are just adorable and I want one! It looks so good, who wouldn't just love it. Hope you have a fabulous week end and thank you so much for sharing with Full Plate Thursday.
Come Back Soon!
Miz Helen

LOVE this!!!! Would you please share this with our readers for Fun Stuff Fridays? https://www.toysinthedryer.com/2012/02/14-days-of-valentines-fun-stuff-fridays_10.html