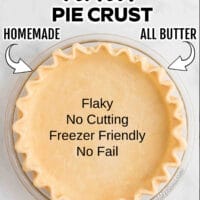 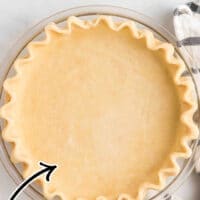 This Homemade Pie Crust Recipe is made with just 5 ingredients! Perfect for making everything from cherry pie to chicken pot pie, this pie crust recipe is easy enough that anyone can make it.

When a recipe calls for a pie crust, what do you usually do? Grab one at the store? There’s nothing wrong with a refrigerated pie crust every now and again but did you know that homemade pie crust is actually incredibly easy to make? In this case of this pie crust recipe, only 5 ingredients are needed – and one of them is water!

There are just 5 ingredients needed to make this homemade pie crust recipe!

Butter vs Shortening in Pie Crust

One of the biggest debates when it comes to homemade pie crust is whether to use all butter, all shortening, or a combo of both as the fat. I am team all-butter, as you can see by the recipe. I prefer butter because it creates a crust that is both sturdy and flaky. Shortening, on the other hand, creates a flaky but delicate crust. I also love the flavor butter lends to the crust.

Is Vodka Good for Pie Crust?

Another variation that’s making its rounds is the addition of vodka to the pie crust. The idea is that vodka works as a liquid that does not promote gluten formation, which results in flakier pie crust.

Honestly? I haven’t tried it because I love this crust the way it is. (Don’t fix what ain’t broken, right!?) However, if you want to give it a shot, just replace a few tablespoons of water with chilled vodka. Don’t worry, your crust won’t taste like vodka! (But note that vodka is the only liquor that should be used.)

How to Make Homemade Pie Crust

Here are the few steps needed to make this all butter pie crust.

Here’s how to turn your discs of dough into a perfectly baked pie every time.

Here are a few tips I’ve learned as I’ve worked to perfect my pie crust recipe.

How Can I Use This Recipe?

It can, obviously, be used for pretty much any pie. Note that some pies will require that you par-bake the crust, so do keep an eye on that. Any custard or no-bake pie will definitely require some pre-cooking of the pie crust.

Additionally, this pie crust recipe is perfect for making homemade pot pies! The buttery, flaky texture goes so well with the creamy filling and you won’t even need to par-bake the dough.

Can I Freeze This?

Yes, homemade pie crust can be frozen before it’s baked. Wrap each disc tightly in plastic wrap, then freeze for up to 3 months. Allow to thaw completely in the fridge, then roll it out and work with it as normal.

Try It With These Pie Recipes: 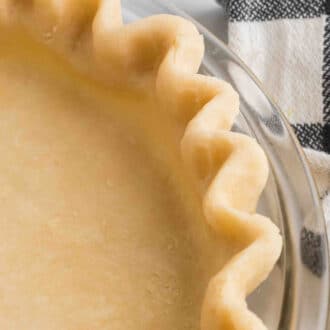 I have made this pie crust recipe many times. However, I use my fingers to mix the butter.  I leave the butter out to soften so that I can work it in with my fingers.  I  knead the flour-butter mixture with my fingers first until it is like fine meal.  Then adding ice water a spoonful at a time until it is the right consistency to hold together. (Usually about 6 to 7 TBS of ice water.    When it is just right, I make into a ball and pat it into shape.  Then put into refridge for about 7 minutes covered with waxed paper.  Put a small amount of flour between two sheets of waxed paper and roll out quickly from center to edges just thin enough to cover glass pie plate.  Peel it off wax paper onto plate.  Makes 2 crusts. Wonderful pie crost.