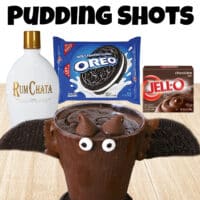 These Bat Pudding Shots are just the cutest Halloween treats! They are rich chocolate jello pudding with Rum Chata and have cute little Oreo bat wings!

This pudding shot recipe is so delicious and super adorable! I love making these cute shots for Halloween parties or any other Halloween occasion. These are so creamy and rich with chocolate and are sure to be the talk of the party!

Pudding: You will need chocolate jello pudding for this recipe. I prefer using the Hershey’s brand for the best quality.

Rum Chata: Add this for the alcohol along with a cup of milk to make it super creamy and smooth.

Oreo’s: You will need these along with some chocolate almond bark to melt and make the cute little bat wings. You will also need candy eyes for decoration as well.

How To Make Bat Pudding Shots

Step 1. In a bowl, follow the directions on the pudding box to make it. Substitute 1 cup of milk with equal amounts of Rum Chata before placing it in the fridge to set. Put a sheet of parchment paper on the counter and arrange 12 Oreos on top. Scrape the filling from the cookies and put it into the pudding mixture before blending. Cut the cookies in half with a shape knife. Cut one pointed end of the half Oreo to make it flat so it can stick to the shot glass.

Step 2. Take the pudding out of the fridge and fill the shot glasses with the mixture. Melt the chocolate almond bark in the microwave for 15-seconds until smooth. Dip the flat piece of the Oreo that you cut into the melted chocolate before sticking it to the side of the shot glass to make wings. Arrange the shot glasses on a baking tray and set them in the fridge for an hour to chill and set.

Step 3. Stick the eyes to the shot glass by adding a small amount of the melted chocolate on the bake of the eyes and pressing it onto the front of the glass. Put the shots into the fridge to set before serving. Enjoy!

These shots will last depending on how they are stored which can be read below. I recommend keeping them in the fridge so they can last for up to 5 days. These can be stored in the freezer for up to 2 months.

How To Store Bat Pudding Shots?

Make sure the shots are in an airtight container for the best storage method. If you plan on storing them at all, I would wait to add the bat wings for easier storage! 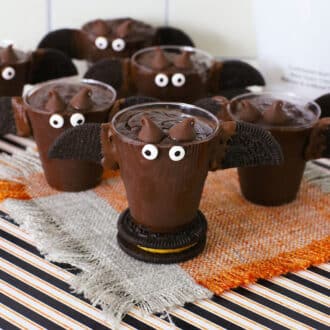