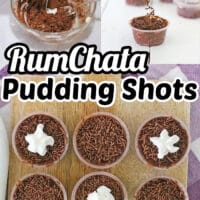 These Chocolate Cheesecake Pudding Shots are the perfect dessert for any occasion. They’re thick, chocolaty, and sweet – everyone will love them!
This recipe also works well if done ahead of time: simply refrigerate after making until serving-and they’ll still taste as good but not have quite so much texture left which might be desirable

What Are Pudding Shots?

Pudding shots are similar to jello shots, but they are made with pudding. You prepare the pudding and combine it with alcohol like the Rumchata and serve it in a shot glass.

Important Ingredients You Will Need to Make Rumchata Pudding Shots

How to Make Rumchata Pudding Shots

Add the heavy whipping cream into the bowl of a standing mixer and combine until thick and stiff with peaks. Place the mixture into a small bowl and set it in the fridge.

In a mixing bowl, add in the softened cream cheese, vanilla, powdered sugar, and cocoa and combine until smooth and creamy. Use a spatula to scrape the sides of the bowl if needed.

Pour the pudding mix and 1 cup of milk into the mixture and combine until smooth and creamy.

Pour in the Rumchata and combine again. Put in the whipped cream and mix one last time on low speed.

Put the mixture into the shot glasses with the chocolate mixture and set it on a tray or cookie sheet. Set in the fridge to chill until it sets or thickens.

Top the pudding shots with Redi-whip whipped cream and some chocolate sprinkles.

How long do RumChata shots last?

If stored correctly, the Rumchata shots can last anywhere between 5 to 7 days. These shots will need to be stored in the fridge or freezer in an air-tight container. 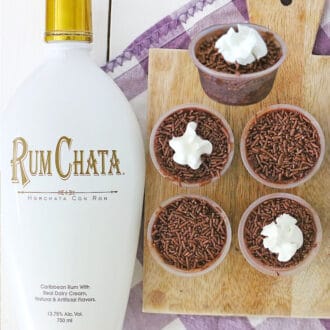