Cinnamon Roll Crockpot Cake is the best breakfast dessert you will ever have! This simple-to-make recipe is a soft and delectable cinnamon roll topped with a gooey and delicious glaze.

Cinnamon Roll Cake made in the Crockpot

This cake is one of my favorites and is so simple. The crockpot will cover all the baking to where you just have to mix your ingredients and let it bake. Your house will be smelling wonderful! The first bite will melt in your mouth and the rest is history. You and whoever tries it will fall in love!

Milk: Use whole or 2% milk to add moisture to the recipe and add additional flavor.

Brown Sugar: This is great for making adding more moisture to the cake. We all love a soft and delectable cake, and this ingredient will do just that.

Cinnamon: Use cinnamon if you want some additional flavor to the recipe.

Powdered Sugar: This is the best sugar to use when needing a frosting with a smooth consistency.

How To Make a Crockpot Cake

Step 1. Set the crockpot to high and put in the nd add the Flour, Salt, Sugar, Baking Powder, Milk, Eggs, Vanilla, and melted butter and combine. Put the butter, brown sugar, flour, and cinnamon into a small bowl and combine to make the crumb topping. Sprinkle the mixture on top of the cake and seal the crockpot with a lid. Allow the cake to cook for 45 mins to an hour or until set. Switch it off and allow the cake to cool in the crockpot.

Step 1. Prepare the glaze ingredients and pour the glaze onto the warm cake and allow it to run down the sides. Once thoroughly cooled, make another round of glaze and use only half of the milk to make it a bit thicker. Put into a pastry bag and cut off the end.

Step 2. Using a crisis cross-motion, add the glaze onto the cake and allow it to set before cutting into 3 x 3-inch pieces. Serve and enjoy!

How To Store Cinnamon Roll Cake?

Place the cake into an airtight container for the best storage method. This recipe can be left at room temperature, but if you want it to last longer, I recommend storing it in the fridge or freezer.

How Long Does Crockpot Cake Last?

How long this cake last depends on how it is stored. If let at room temperature it will need to be seated rather quickly because it will only last about 2-3 days. Whereas it can last up to a month in the freezer. 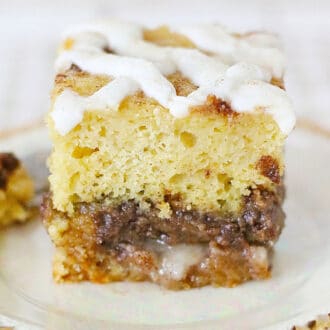