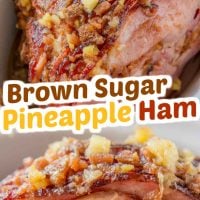 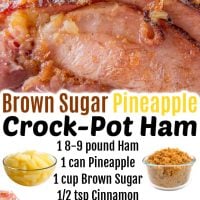 Made with just 6 ingredients, this Slow Cooker Brown Sugar Pineapple Ham features a sweet and tangy topping that will be loved by everyone. This slow cooker ham is ready in just 3 hours, with no oven space needed. It’s perfect for holidays but so easy you can make it anytime.

You know those holiday mornings, whether it’s Easter or Christmas or Thanksgiving, where you wake up early just to start preparing for the big meal and you try to time everything just right so each dish is hot and ready at the same time?

My slow cooker is the one thing that helps me keep my sanity during those times. Any dish I can make in the slow cooker, like today’s Brown Sugar Pineapple Ham, is a dish that frees up oven space and makes the prep and cooking so much easier.

And if you’re preparing for one of those BIG dinners that require both a turkey and ham and maybe some beef too? This slow cooker ham recipe will be your secret to stress-free success.

Ham is the perfect thing to cook in the slow cooker because they’re already cooked. When you bake a ham, you’re essentially just warming it through and adding flavor.

In this case, the flavor comes this a super simple brown sugar pineapple glaze that’s the perfect combination of tangy and sweet. Serve with your favorite side dishes and you have a holiday dinner guests won’t forget!

Why Cook A Ham in The Slow Cooker?

In my opinion, slow cooker ham is far superior to any other ham you will ever make. Why?

You will only need 6-ingredients for this delicious crockpot ham with pineapple recipe – SO EASY!

How Much Ham Do I Need Per Person?

We like to estimate about 3/4 pound of ham per person (with the bone in). However, if you have a bunch of hungry boys that eat a ton as I do, you can increase it to 1 pound. You might end up with some leftovers, but that’s a good thing! Use 1/2 pound per person with a boneless ham.

Making this brown sugar ham literally could not be easier. This will be the easiest holiday ham you ever make, by far.

If this is your first time making ham in the slow cooker, here are a few things that you might find helpful.

One of my favorite things about ham is that it can be served warm, room temperature, or even cold. This is the least fussy part of your holiday meal!

We obviously serve this up quite frequently on the holidays, whether it’s Easter or Christmas, but this is such an easy recipe that it’s great for making year-round too.

Here are some of my favorite side dishes that go well with this pineapple ham recipe.

I love to serve this the first day as part of a big dinner then enjoy ham sandwiches for lunch the next day or even add cubes of it to a salad.

How to Store Cooked Ham

This pineapple ham can be stored in the fridge for up to 4 days. Just keep it covered or in an airtight container. I recommend storing it with as many juices as possible, to prevent it from drying out.

Leftovers can be reheated in the microwave or you can enjoy cold slices of ham on sandwiches, in salads, and more. Honestly, I think the leftovers taste even better than the freshly cooked ham!

Can I Freeze Cooked Ham?

Absolutely. If you actually end up with leftovers that aren’t devoured the next day, this ham freezes well! I like to freeze extras in ziploc bags. Then just thaw in the fridge and you have ham ready for making sandwiches or even another ham dinner! 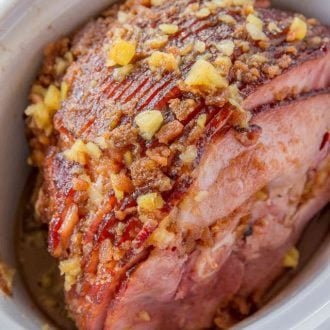 Published By Jill
Made with just 6 ingredients, this Slow Cooker Brown Sugar Pineapple Ham features a sweet and tangy topping that will be loved by everyone. This slow cooker ham is ready in just 3 hours, with no oven space needed. It's perfect for holidays but so easy you can make it anytime.
5 from 122 votes
Print Recipe Pin Recipe Rate this Recipe
Prep Time 15 mins
Cook Time 3 hrs
Total Time 3 hrs 15 mins
Course Main Course
Cuisine American
Servings 16 servings
Calories 695 kcal

LOVE the recipe! Super easy & everyone loved it.

I LOVE THE HOW STEP BY STEP VIDEOS

Cook it on high? Low?? How long?? The video should say tbis!

It says it in the directions. 🙂

Cook on low for 3 hours.

This turned out AMAZING yesterday (Thanksgiving 2020 🙂 ). It was so tender that it was literally coming apart, and it was by far the juiciest ham I’ve ever eaten. I have recommended it to several family members and will be making it again for Christmas! Thank you so much for sharing!! Blessing to you and your beautiful family.

This was great. I made a ham steak and put the pineapple brown sugar topping over it and cooked on low on stove for about 45 minutes.  Turned out juicy and delicious

This looks good. My bottom element is currently not working and was thinking of cooking on the bbq at a low temperature. May try this instead.

Hands down the best ham I’ve ever served! So moist and flavorful – I’ll always make it in the crockpot from here on out! Thank you for the recipe!

My grandfather passed away a few years ago and took his famous ham recipe with him to the grave. This recipe is the closest I have come to replicating it. It smells and taste just like his did. Thank you for posting this recipe and bringing me a tad bit closer to him again.

Hi what kind of ham is ceryome using? A pre-cooked ham? I notice it’s already sliced in the video where is that something that you do or it came like that?

Jill- Can this recipe be converted for an Instant Pot?

Made it today for Thanksgiving!! What a game changer, especially since I worked overnight with no time to prepare extra food and sides!! Ave everyone loved it!! Thanks for sharing!!

Will definitely be cooking my hams this way in the future!