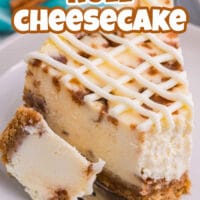 This recipe for cinnamon roll cheesecake is going to be a life-changer. It’s sweet, creamy and delicious with all the comforting flavors of cinnamon rolls in cheesecake form. 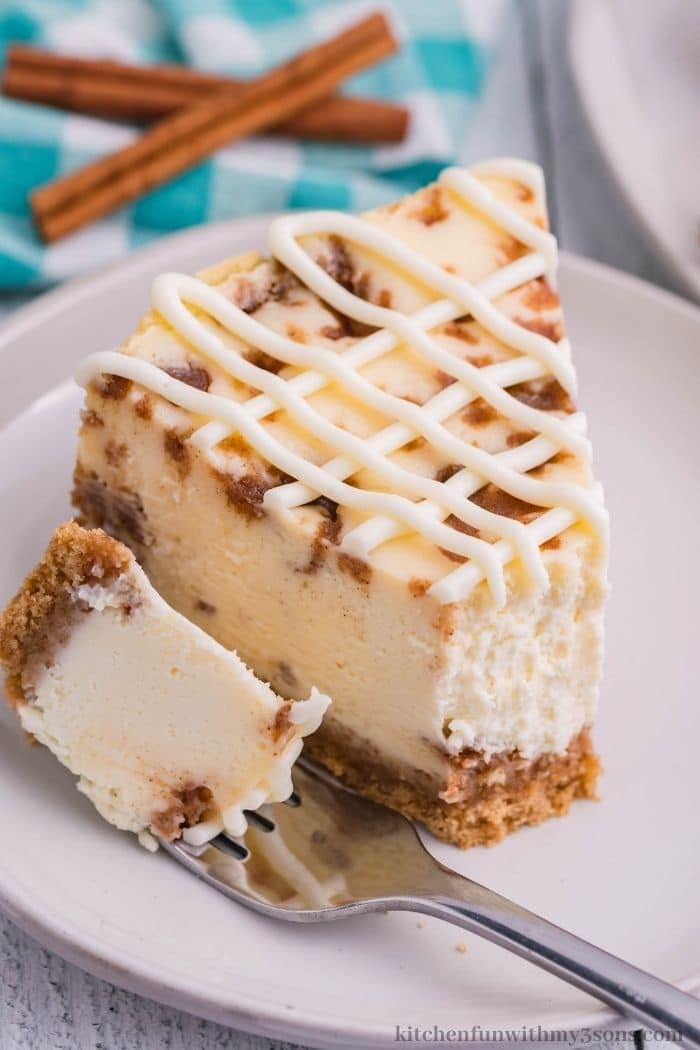 This Cinnamon Roll Cheesecake is a bomb of incredible flavor and it is absolutely delicious! This recipe uses ingredients to combine two of my favorite recipes. You could easily enjoy this recipe in the morning or after dinner. Cinnamon Rolls are the best and if the idea of a cinnamon roll cheesecake excites you then you are sure to devour these Frosted Cinnamon Roll Cookies or this Crock Pot Cinnamon Roll Casserole.

How to Make Cinnamon Roll Cheesecake

To start, set your oven to 350 degrees, then use Pam baking spray to grease a 9″ springform pan and for extra protection add a round piece of parchment paper at the bottom of the pan.

First, in a food processor, you will need to crush the graham crackers, then combine the crumbs with melted butter. 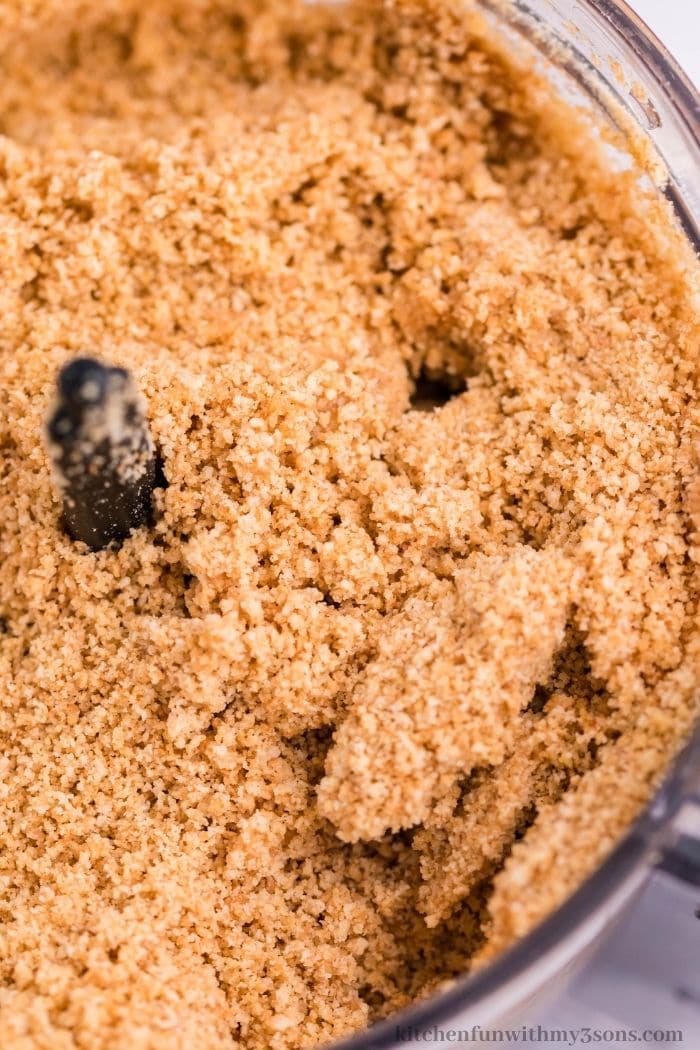 Secondly, gently press the crumb base into the pan using a spoon or your hands. Be sure to have the crust go at least 1″ up the sides of the pan. 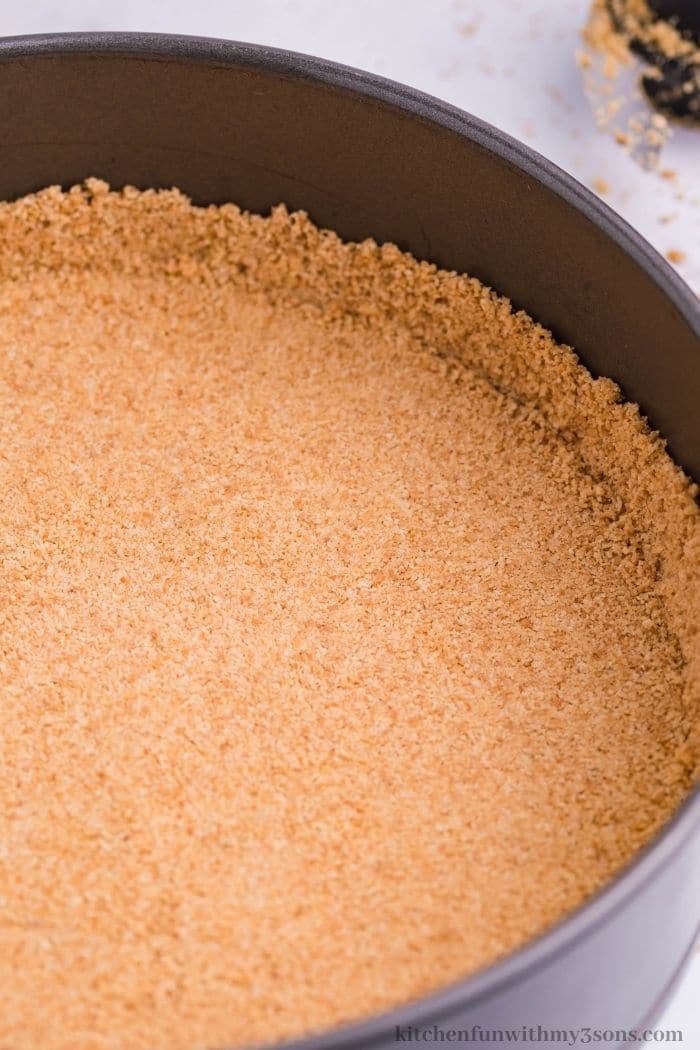 Next, place the crust into the oven for 10 minutes or until light brown. Once done, take it out of the oven and allow it to rest and cool on a wire rack.

To begin, add all the ingredients for the crumble in a small bowl and combine using a fork until you have a wet sand-like consistency.

To start, in the bowl of a standing mixer, add in the cream cheese and beat using a paddle attachment for 5-6 minutes until light and fluffy while using a rubber spatula to remove excess off the sides of the bowl.

First, add the sugar and flour into the cream cheese and combine at low speed to start, and as the sugar gets incorporated increase the speed to medium for another 1-2 minutes.

Secondly, pour in the vanilla and combine until fully incorporated.

Thirdly, turn the speed down to low and one at a time, add in the eggs until combined. (DO NOT overmix) 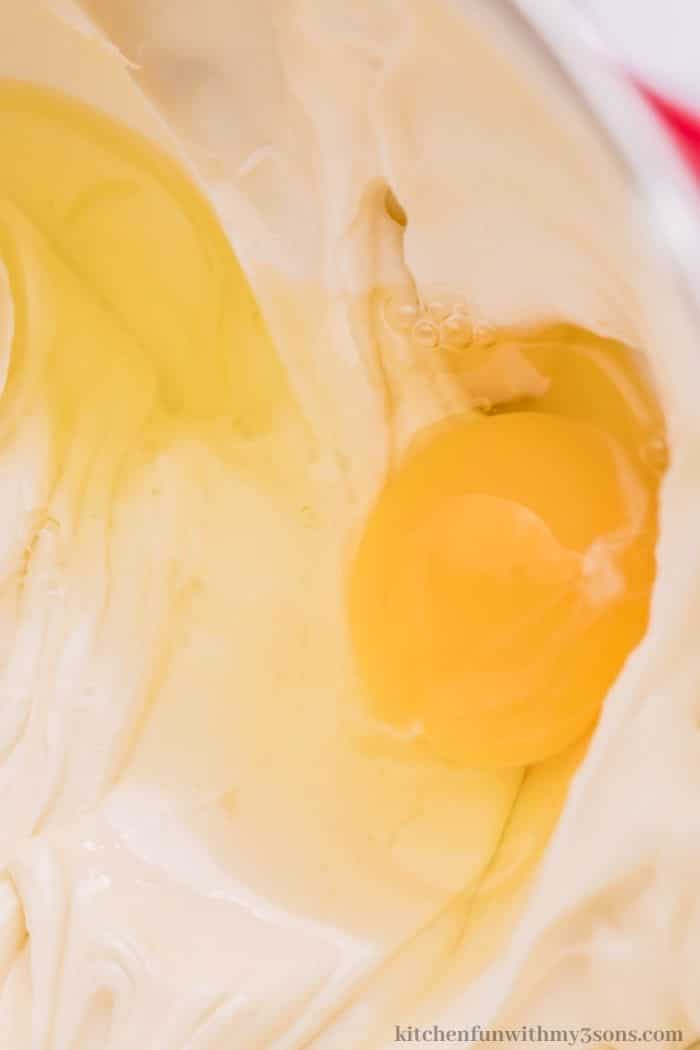 In addition, you will add the rest of the cheesecake filling on top and follow with a final layer of crumble. 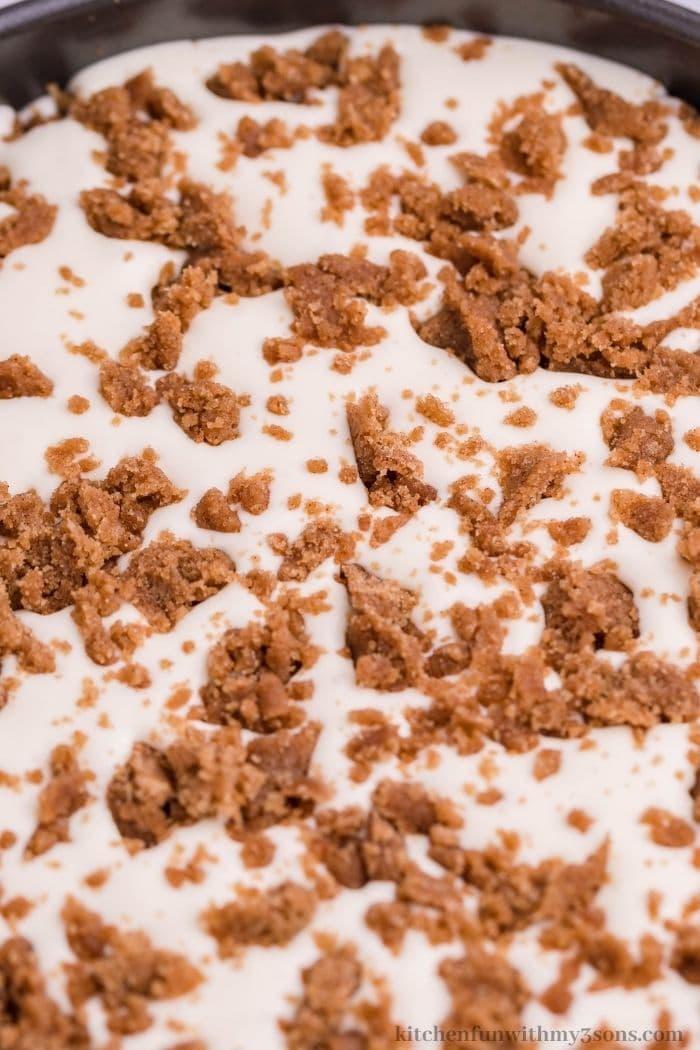 Furthermore, place the recipe into the oven for 15 minutes to bake at 350 degrees, then once the time is up, you will need to crack the oven door open a bit and reduce the heat to 200 degrees. Let the cheesecake sit in the oven for another 50-55 minutes until the edges are set and the middle is slightly jiggly. (You want a Jell-O consistency if the recipe is still too runny/watery, it will need to bake for another 5-10 minutes making sure to check it often) The recipe will set as it cools, so keep this helpful tip in mind.

To finish, switch the temperature of the oven off and let the cheesecake cool with the oven door open slightly for 15-20 minutes before taking it out.

Finally, transfer the recipe to a wire rack to cool thoroughly, then put the cheesecake in the fridge for 6 hours or overnight for the best results. 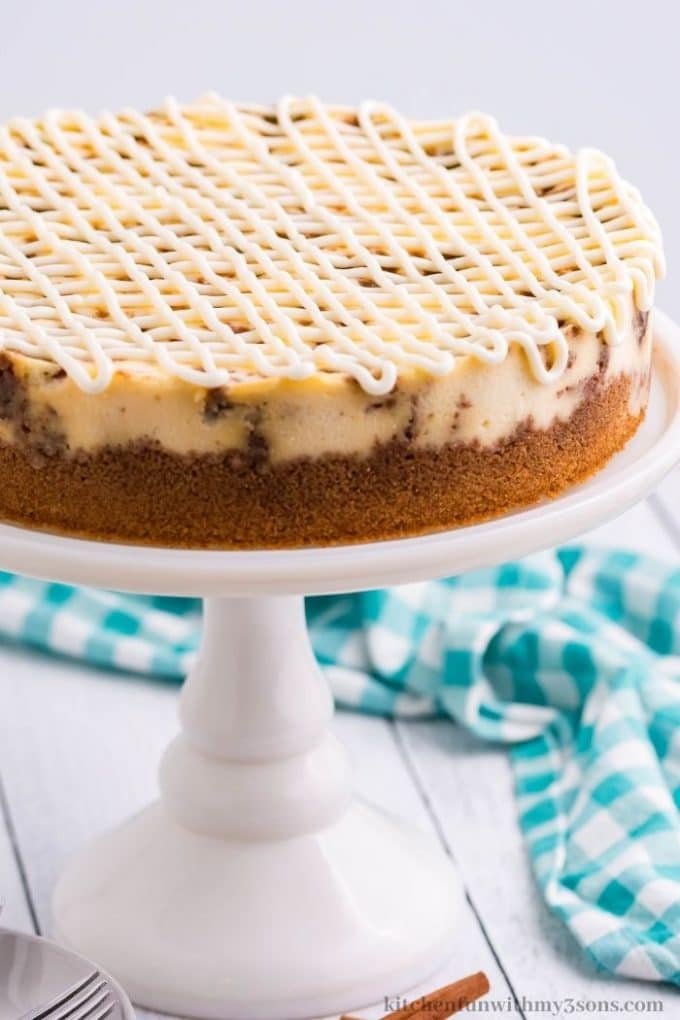 To begin, add the butter and cream cheese into a mixing bowl and beat for 1-2 minutes on high speed using a hand mixer.

Secondly, mix in the powdered sugar slowly until fully incorporated.

Thirdly, add in the vanilla slowly until combined.

Next, add the mixture into a piping bag with a small round tip, or you can use a Ziploc bag and use scissors to remove the corner.

Finally, drizzle the topping all over the cheesecake.

Serve immediately and place leftovers in the fridge to last for up to 3 days. 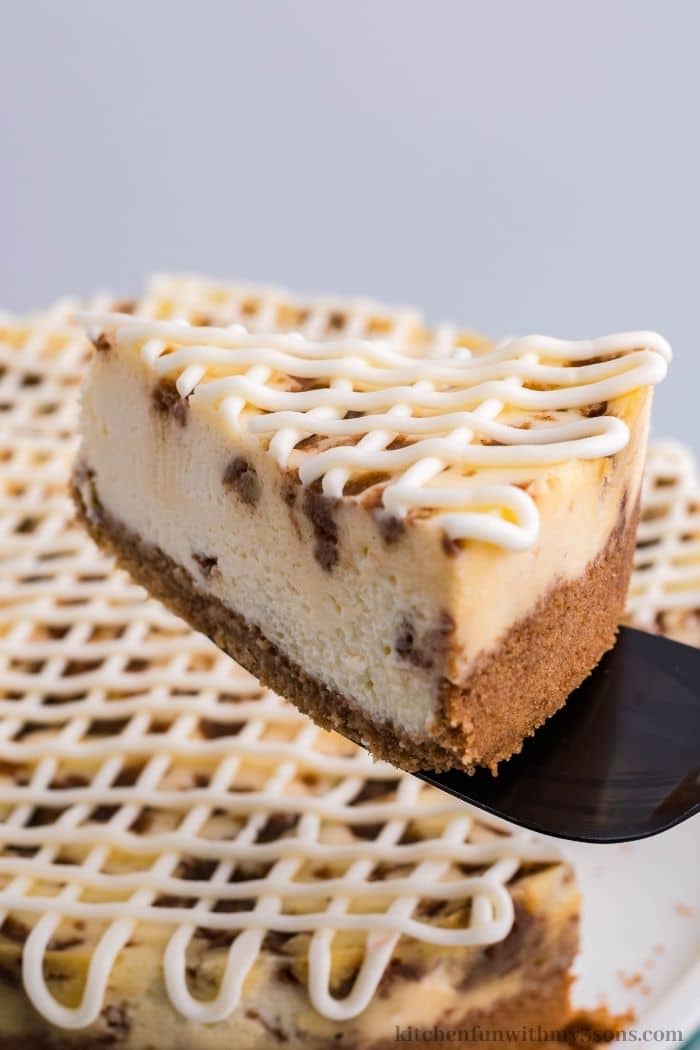 How Do I Know When My Cheesecake Is Done Baking?

The best way to know if a cheesecake is finished baking is by checking the middle of it. The center of the cheesecake should come out looking set around the edges with a slight jiggle in the middle. You do not want the recipe to be at all runny or watery, if that is the case, you will want to make the recipe for an additional 5-10 minutes.

How to Store Cinnamon Roll Cheesecake?

You can store this recipe in an airtight container. You can leave it in the fridge or freezer for the best storage space. If you place the recipe into the freezer, you will want to wrap it in cling wrap and foil. 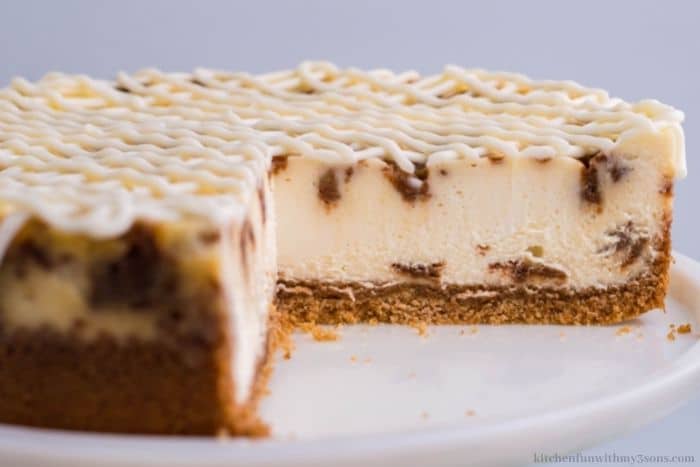 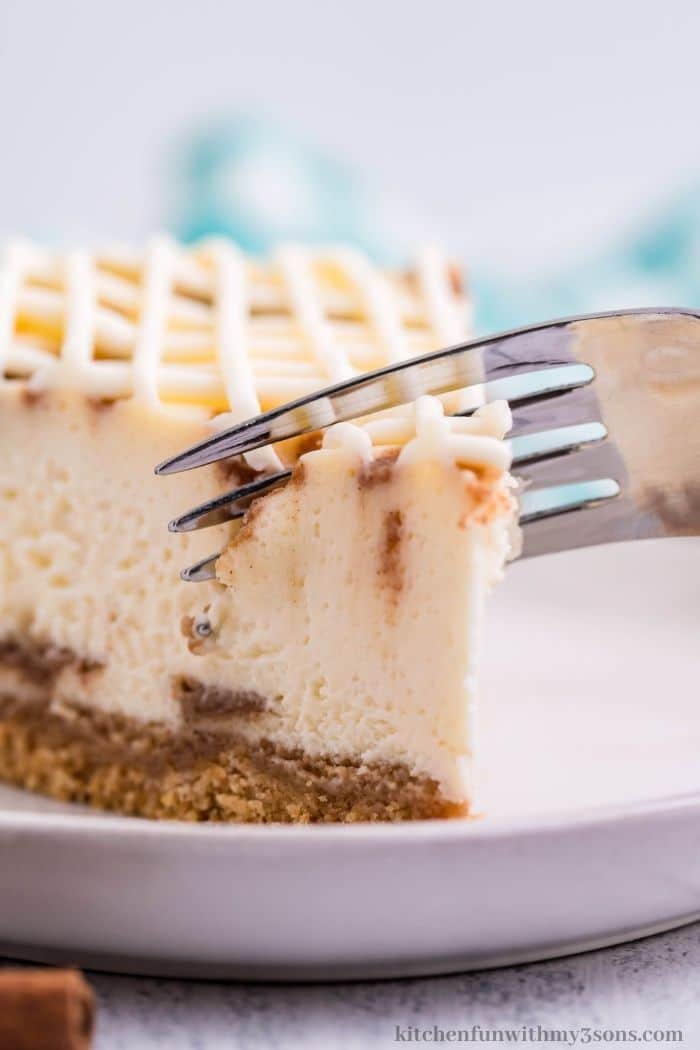 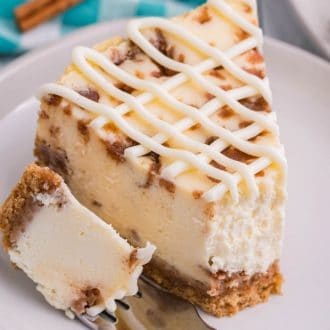 Make sure that your cream cheese is at room temperature before starting. If the cream cheese is cold, you will have a lumpy cheesecake. If you warm it up in the microwave it will get too hot and the consistency will be off.  I cream my cream cheese for 5-7 minutes before I add any other ingredient to make sure the cream cheese is nice and smooth. I do this every time and I get a perfect consistency.  Add the eggs very last and mix as little as possible.  After the bake time is up, the cheesecake should be slightly jiggly in the center, but the edges should be set. The center should resemble Jell-O but not look watery. Turn the oven off and slightly crack the oven door to allow the cheesecake to cool slowly, this helps prevent cracking.  To remove the outer ring from the springform without ruining your cake: Run hot water around the edges of the springform (without getting water on the cheesecake) 2-3 times. Gently remove the springform and it should come right off with no problem!  To get the perfect slice of cheesecake: Grab a large straight blade kitchen knife and use a kitchen torch to get the end of the blade hot (be VERY CAREFUL). Make your first cut, clean your blade, and repeat with the second cut. If you do not have a kitchen torch, you can use very hot water.
Tried this recipe?Mention @kitchenfunwithmy3sons or tag #kitchenfunwithmy3sons!

That looks so delicious! I can’t wait to try this!!