Crockpot Coca-Cola Cake is super moist and decadent topped with a smooth and creamy chocolate icing that oozes into the cake.

If I had a cake that I would recommend to anyone, it would be this one! This Cake is so delicious and so simple to make. All you need to do is add the ingredients into your crockpot and mix. The crockpot will work its magic and cook it until you have a warm, gooey, and chocolatey cake. Serve with our delicious homemade vanilla ice cream and hot fudge sauce.

Coca-Cola: I use regular coca-cola, but if you want to add more flavor you can use cherry cola, vanilla, or whatever fun flavors they got.

Cocoa: Use this to get the main chocolatey flavor for the recipe as well as the frosting. I like to use Hershey’s Brand.

Sugar: This recipe use regular white sugar to add sweetness and use powdered sugar for the frosting.

How To Make Coca Cola Cake

Step 1. Set the crockpot to high and put in a stick of butter to melt before adding in the eggs and sugar. Combine the ingredients until creamy, Put in the oil, and milk, and combine again. Next, put in the flour, salt, cocoa, and baking soda and mix. Put in the vanilla, and coca-cola, and combine one last time.

Step 2. Seal with the lid and allow the ingredients to cook for 30 minutes on high, then switch to medium and cook for an additional 30 minutes. Switch off the heat, frost and allow the cake to cool for at least an hour or 2.

Step 1. Add the butter, cocoa, milk, and vanilla into the mixing bowl of a standing mixer and combine on low. A little at a time, add in the powdered sugar and combine until thick and fully blended. Add more milk if the frosting is too thick and more sugar if it’s too thin.

Step 2. While the cake is still in the crockpot, frost it, and slice it into 3×3-inch pieces. Serve, and enjoy!

The coca-cola will add a nice yet subtle flavor to the cake. It doesn’t really taste like Coca Cola, despite all the soda added in, but the soda does help give it that lovely rise and moist texture.

Can You Make This Coca-Cola Cake With Diet Coke?

It is possible, but for this recipe, I recommend using regular coca-cola because it has the best sugar quality for this dessert and adds the most and best flavor. 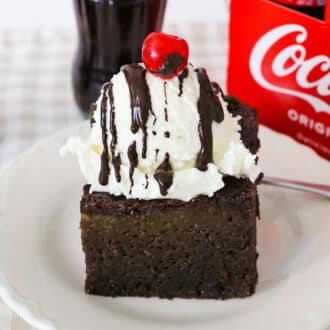 Optional:  Top Cake pieces with a large scoop of Vanilla Ice Cream, drizzle with Hot Fudge Sauce, and top with a Maraschino Cherry. Frosting – we like the frosting to melt into the cake. If you like a thicker frosting on top, just let the cake cool, then frost.
Tried this recipe?Mention @kitchenfunwithmy3sons or tag #kitchenfunwithmy3sons!