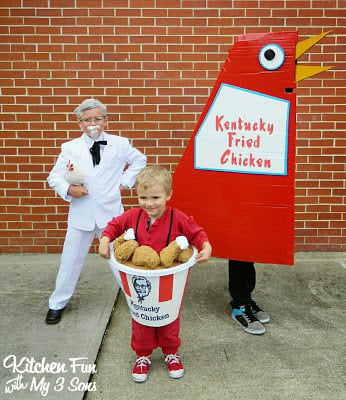 Most of you know that have been following us for awhile how much we love making homemade Halloween costumes! We always have so much fun making them & this year we decided to go with a KFC costume theme.

My little chicken boys were in our city of Marietta, GA costume contest last Saturday & won 1st place as a group, my 9 year old Big Chicken won 2nd place, my 7 year old Colonial Sanders won 1st place, & my 3 year old Bucket of Chicken won 2nd place all for individuals. We had so much fun making these & I can’t believe we got them done! We had less than 1 day to gather everything up & put it all together. We are sharing all of our past costumes below for you to check out as well.

Unless you are from Atlanta, GA or have visited here you might be wondering what in the world is that Big Chicken?! We live in Marietta, GA the home of the original KFC Big Chicken! It’s a huge landmark here. If you happen to visit Atlanta & stop to ask for directions it’s pretty much a guarantee that someone will mention turning left or right at the “Big Chicken“. 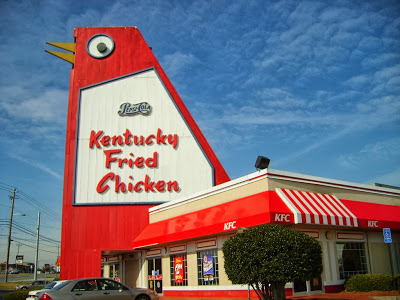 “The Big Chicken” is a well known Marietta, GA landmark that rises above a KFC restaurant at the intersection of Cobb Parkway and Roswell Road. It is a large steel-sided structure with a moving beak and eyes.

History: The Big Chicken was built in 1963 for a restaurant called Johnny Reb’s Chick-Chuck-’N’-Shake (see below). The owner, Stanley R. “Tubby” Davis, created the seven story tall structure as a way to advertise his restaurant. Soon the towering landmark was used as a reference point and phrases like “turn left at the big chicken” or “just one mile south of the big chicken” became common. A few years after construction of the big chicken, Davis sold Johnny Reb’s to his brother who turned it into a franchise of KFC. In 1993, after years of deterioration and recent storm damage, the famous landmark was in danger of being torn down. When news of this plan reached the public, the outcry was so great that KFC agreed to rebuild the entire structure and restore it to its former glory.

My boys always love driving by the Big Chicken. They also love watching the eyes & beak move around.

I thought of this idea before we had made our April Fools KFC Dessert a couple of years ago, but we went with the camping theme last year instead. I am glad we went with the KFC theme this year.

Here is the Kentucky Fried Chicken Dessert in case you missed… 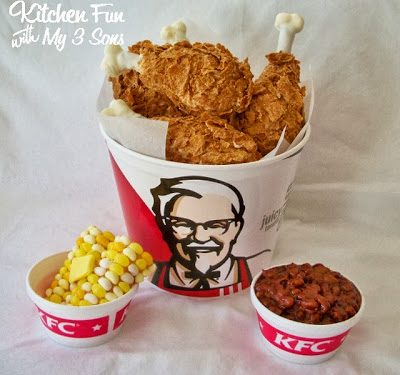 Here’s a shot of all of us at the Halloween costume contest. 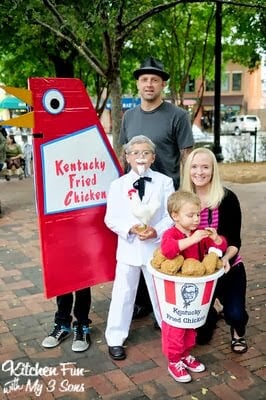 We did end up on the cover of the Marietta Daily Journal the next day…pretty neat! 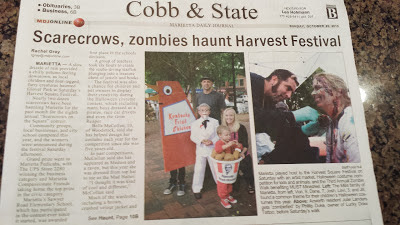 Now lets talk about our individual KFC costumes! Here is my little Chicken Bucket. We had to make this light & easy for my 3 year old to keep on & not complain. I think we managed that pretty good. The bucket is a clothes basket that we found at Walmart for a couple of bucks & we covered it with poster board. I printed off the 1970’s KFC logo (I just like that one) & glued it on the front. I covered socks with brown paper bags & glued crushed Raisin Bran on top with Mod Podge. 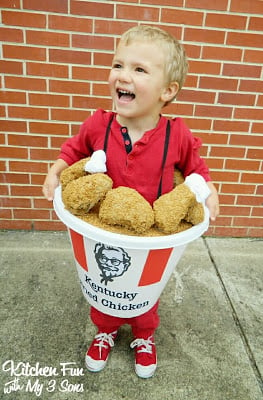 We just used what we had on hand & think we ended up with a pretty cute bucket of chicken…don’t ya think?:) 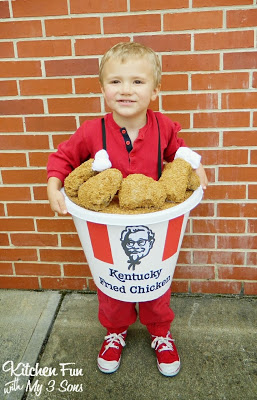 Now for our Colonel Sanders! We usually never buy anything extra to make our costumes & always use what we already have. However, we did find this white suit for a really good price & bought it. We had to cut a big white beard (that’s all we could find) & cut it to fit & look right. We sprayed his hair white. He also carried around a chicken that looks pretty real. I made this tie from cutting pieces from some black material & sewing it up. My husband remembered he had these glasses (no telling why..ha) & that’s about it! 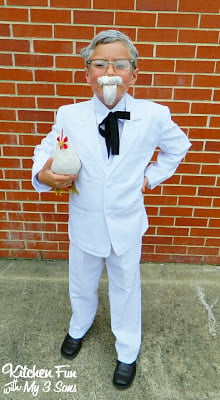 Now for our Big Chicken! Here is our costume next to our real KFC Big Chicken in Marietta, GA. 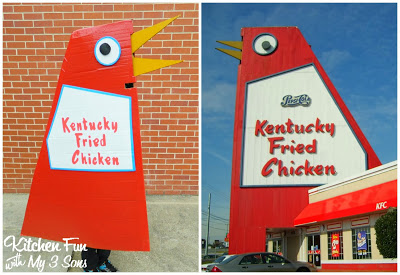 My husband always makes amazing costumes with boxes & shaped a box into this. I was pretty impressed with how this turned out from the beat up box that he had to work with. I was there to decorate & the biggest pain with this for me was hand cutting the letters for the sides. 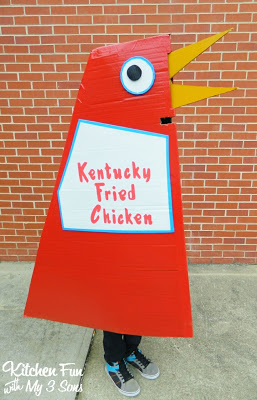 The beak & eyes move on the Big Chicken so we at least go the beak to move up & down which was pretty neat. My 9 year old had fun operating the beak!:) 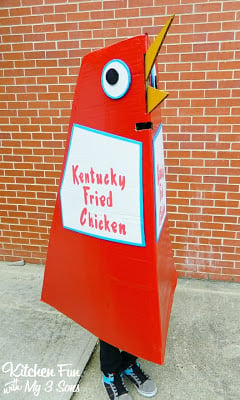 Buckets of chicken can be pretty scary as well for Halloween you know! 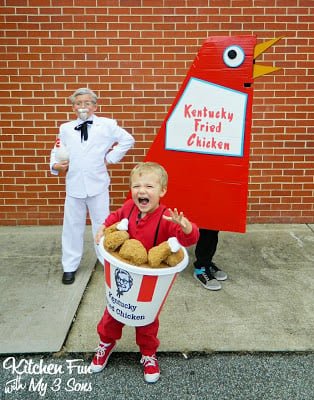 If you are going to be a bucket of chicken for Halloween you have to lick your fingers quite often because it is finger lickin’ good!:) 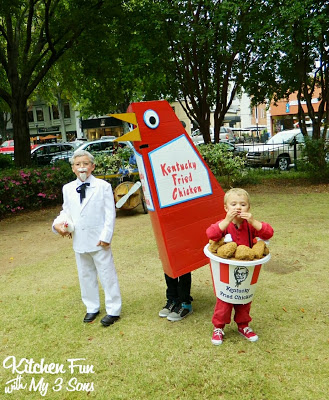 Here are my little 1st place winners on stage in the contest! Check out the circus costumes next to them…they were so cute! 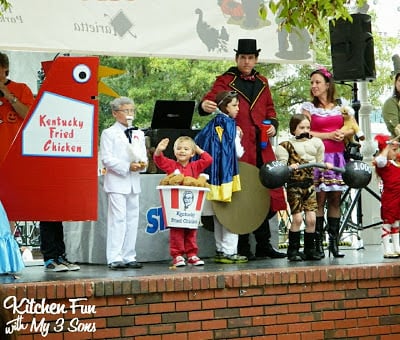 Here are the homemade costumes we have created in the past starting from the most recent…. 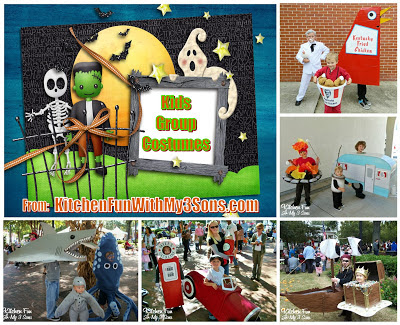 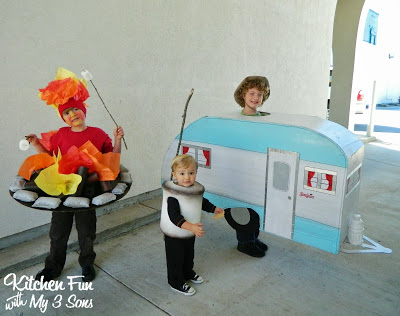 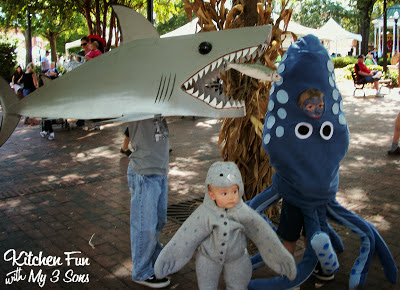 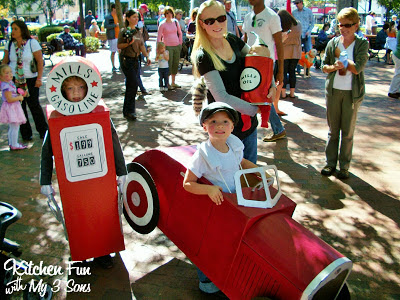 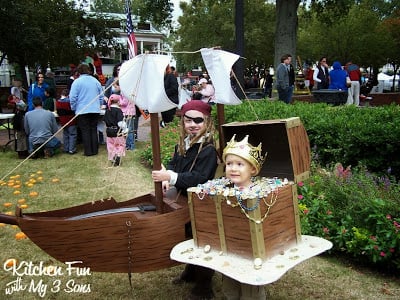 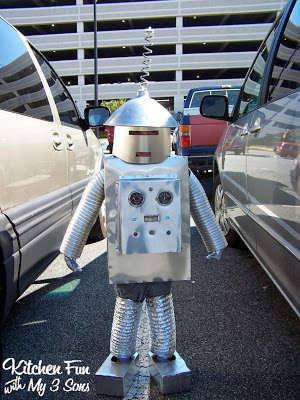 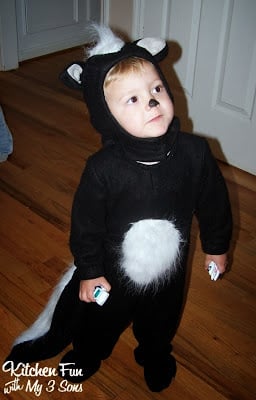 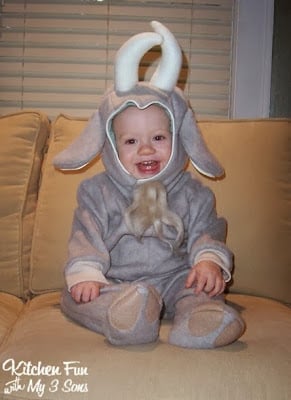 You can view all of our other Halloween fun food creations HERE!

Just found your site and love it!! Great costumes, we actually saw you guys at the Square this weekend, those boys looked adorable!

Reply
On Being Bianca ...

this is just about the funniest and most fun group costume I've seen! How very creative (and cute). I'm in Atlanta as well and can tell you first hand, y'all nailed the Big Chicken! xx, b being-bianca.com

Reply
kitchenfun3sons@gmail.com
Author
Reply to  On Being Bianca ...

Thanks Bianca…we pass the Big Chicken just about every day!:)

You did it again! Amazing costumes. Each individual costume is fantastic, but together they are incredible. Congrats on all the prizes and on getting in the newspaper.

Thanks so much Beth!

Reply
Lynn@Happier Than a Pig in Mud

Too cute! Congrats to all of you on first place, that makes it even more fun! Bet the boys had a blast:@)

Reply
Robin @ Bird On A Cake

I love all these costumes!! My favorite is the little Colonel Sanders. Fantastic job!

I used to live in may'retta right near the big chicken! (now, we're in atlanta). bianca's right – you NAILED it. those costumes are so amazing and spot on! no wonder they won first place. you're children are adorable and your ongoing posts are so creative an fun. thanks!!

Oh my gosh Jill. SO awesome!!!

Love the costumes!! So cute! I made my son's costume last year and had so much fun.

Seriously, you must love Halloween and I bet you're already planning the costumes for next year!! Always love what you create! Congrats on the win!

Wow … you did it again … maybe you could start a costume business in your spare time! The boys look so cute 😉

I can see why your kids won, awesome costumes!!! I am in love with all of your homemade costumes!! 🙂

You come up with the most creative and cool costumes!! LOVE it!! Thanks for sharing 🙂

These costumes (and actually all the others from previous years) are so creative and well-made! I'm not surprised at all that they won so many categories 😉 The bucket of chicken costume is brilliant! Thanks so much for sharing. What an inspiration!

A day? Seriously? You are one talented mama! They look so cute through the years. Memories they will treasure forever!

So, so cute…and we're just around the corner from you! 🙂

i am DYING AT HOW AMAZINGLY COOL YOU ARE!!! KFC costumes = MIND BLOWN. every other costume = MIND BLOWN TO SMITHEREENS! i bow down to you!!

This is amazing!! I love your idea. Thank you for sharing!!

Jill, Can't wait to see what you come up with THIS year! Always a treat!