Science Says Too Many Toys Makes Playing Much Less Fun

Somewhere down deep, you know that your kids probably have too many toys. I get it. We’ve all been there. Now science has given you a reason to get rid of them.

Parents love their kids, and loving means wanting to shower them with words, praise, hugs, and kisses. I think some of us can admit that sometimes, it means buying a toy we know for sure they don’t need. For us, the payoff is the look in our kiddo’s eyes when we give them a toy they want. We shouldn’t, but we do. Parenting is hard stuff. 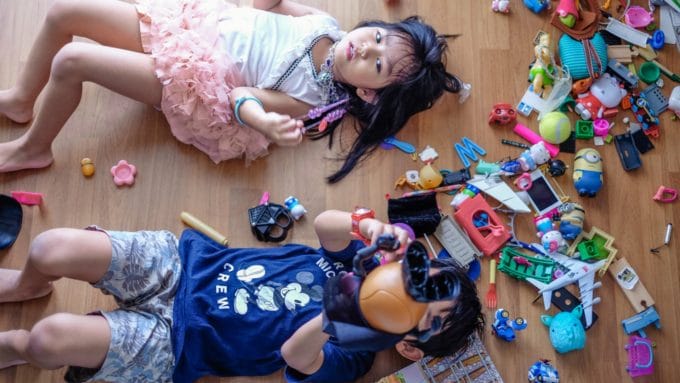 Too Many Toys Makes for Unhappy Kiddos

That sounds counterintuitive, doesn’t it? Why in the world would something a kid loves make them grumpy, fussy and overwhelmed? (Hang on while I ask the ice cream in my freezer why it makes me fat even though I really love it.)

A 2018 study says it’s not that deep. Quite simply, they say their study confirms that kids with too many toys have less fun playing than do kids with fewer toys.

Little ones, so they say, will play better and focus more if they aren’t surrounded by mountains of Legos, dolls, cars, and 1,000 Shopkins.

When kids have fewer toys, they find more ways to play with them.

Their little brains start to fire away with creative ideas when there aren’t so many stimuli to distract them. Imagine being in an ice cream shop (apparently, I have ice cream on the brain) and being told that you can have as many kinds of ice cream as you want for the next hour.

At first, that sounds great. And then 15 minutes later… well, it still sounds great because of that whole ice cream on the brain thing.

But, seriously, I think it would be hard for most people to enjoy chocolate chip when they’re distracted by whether or not they should be eating oatmeal raisin cookie ice cream. (No. You shouldn’t. Raisins are the devil’s chocolate chips.) It’s too many choices at once, which is how it is for your kids.

Too many toys lead to shorter playtime.

From the study: “Each participant engaged in supervised, individual free play sessions under two conditions: Four Toy and Sixteen Toy. With fewer toys, participants had fewer incidences of toy play, longer durations of toy play, and played with toys in a greater variety of ways.

This suggests that when provided with fewer toys in the environment, toddlers engage in longer periods of play with a single toy, allowing better focus to explore and play more creatively. This can be offered as a recommendation in many natural environments to support children’s development and promote healthy play.”

How to pare down.

Step one: Get the kids out of the house! Do not attempt to do this job with them around or the only thing you will remove from their room is yourself. They will keep everything. One old doll sock, a ragged sheet torn out of a coloring book, the plastic bracelet they got at Chuck E. Cheese – these are all things they would gladly give their lives to keep.

Step two: One pile to keep, one pile to donate, one pile for trash. You’re going to be organizing for a while, so also include a pile of Oreos for yourself.

Step three: Wait for the vengeance they are sure to inflict upon you. When they get home and see what you’ve done, their anger will rain down on you like a thunderstorm.

You did the right thing, no matter how they react to having fewer toys. Over the course of days, you’ll see them playing again, this time with fewer distractions standing between them and their creativity.

Trust the science and trust your gut.

Too many toys make lulls we parents into thinking we’re doing a great job because we give and give and give. I think most of us know that we’ve got to start dialing the material giving back a bit. We need to trust our instincts and do what we know to be right for our kids. Right? Right!