Home » Tips » Was This Autistic Boy Bullied By a Teacher?

Was This Autistic Boy Bullied By a Teacher?

An autistic 11-year-old boy in Gary, Indiana was given an award by his special needs teacher for “most annoying male.” Was this child bullied by a teacher? You decide.

We’ve written about bullying before. One 16-year-old was bullied so badly, he wound up unable to speak or walk after he was beaten up. And a community in Wisconsin, in an effort to end bullying, has plans to fine parents of bullies. Bullying is a very serious matter and should be thoughtfully dealt with immediately when a parent suspects it is happening to their child. You can learn more at StopBullying.gov. 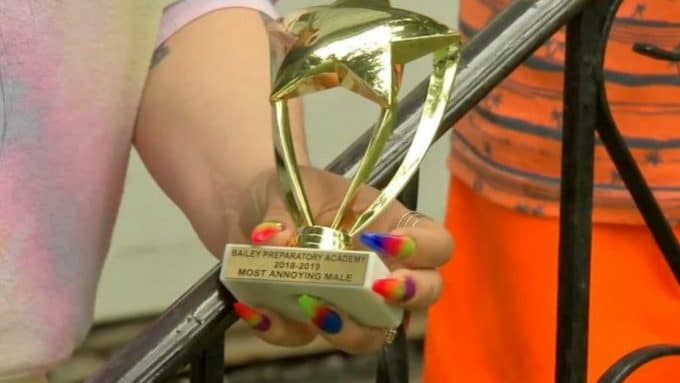 Was This Autistic Boy Bullied By a Teacher?

This story is about the treatment an autistic boy received and whether it amounted to being bullied by a teacher. Of course, parents know bullying exists and so we all try to be tuned in to the signs.

I’m going to share this story with you, and I’ll let you decide for yourself whether this sweet child was bullied by a teacher. Your opinions are welcome in the comments, but please be respectful of other opinions. I especially hope parents of kids on the spectrum will weigh in.

At the end of the school year, as is the tradition of lots and lots of schools, the Bailly Preparatory Academy in Gary, Indiana had an awards ceremony. You know the kind I’m talking about. There are trophies for most improved, best attendance, etc. Kids usually love them and they’re a lighthearted, fun way to bring the year to a close. At least that’s what they’re supposed to be.

The undisputed event happened at the 5th-grade ceremony which was attended by parents, students, and the principal. When it was time for the awards, an as yet unnamed special education teacher presented a young autistic boy with a trophy inscribed “BAILEY PREPARATORY ACADEMY 2018-2019 MOST ANNOYING MALE.”

His Dad was in shock. The 11-year-old is nonverbal, occasionally rocks back and forth and can become easily emotional, his dad told the local newspaper. Dad purposely left the trophy on the table afterward, but the teacher reminded him not to forget it. She sort of laughed it off, as though it was a funny joke she thought everyone would get.

Throughout the school year, he said,  his son’s teachers routinely called home with concerns about how to handle his son’s behavior, but it wasn’t until his son was presented the “Most Annoying Male” award that he said he felt real concern. “They called me all the time if he didn’t want to work, would cry or would have a breakdown,” he said. “A special needs education teacher should know how to handle these things.”

Now, he wonders whether all those calls are the reason for this “award.” (source)

What the school said in response.

Gary Community School Corp. emergency manager Peter Morikis confirmed it happened. “The Gary Community School Corporation does not condone this type of behavior and will continue to put the safety and well-being of our students first. We extend our deepest apologies to the impacted student, the family and anyone else who take offense to this unfortunate occurrence.”

Weigh in with your thoughts and feelings

Was this teacher a bully? Should she be fired? I should note that while the school says the teacher was disciplined, that’s all we know as of this writing.

What would you do if this happened to your special needs child?

The teacher should be fired, she’s in the wrong position.

This teacher should be fired

I have worked in an elementary special education class for 6 years. I love each and every student, no matter how challenging the behavior may be, as if they were my own child. If this ever happened in my school district, I’m positive they would be let go immediately. That is absurd and completely uncalled for! I feel for the boy and his family. He may not be able to talk, but he surely does know what that teacher thinks of him. If this is the award he was given, I can just imagine how she treated him in the classroom. And yes, a special education teacher learns how to handle these behaviors. She needs to be let go.

I am sorry but I would go ballistic. Yes that teacher should be fired. Anyone working with children should know how to treat them, and how to help them. It is an adults responsibility to protect children, to teach children, to show our children we as adults are safe to come to when they need to, and most importantly to protect them. I would never allow anyone to treat my child in such a way that would lower their self esteem.

She should be made to stand before the entire school, kids, parents, teachers and community and explain what she did and why, then take questions/comments from the audience.

ABSOLUTELY!!! She should be fired!!! This is not appropriate!

Yes, this is mean bullying by a teacher noless. Shame on you. Props to the dad for leaving the trophy and for holding his tongue. I would hope to be that strong. These teachers should be specially trained to work with Autistic children. This teacher does not deserve to work with any child!!!! Great job dad!!!!

This teacher should be shown the door. He is a bully plain and simple. Anyone with a brain wouldnt even think of doing what he or she did. What is he teaching other students by his actions. If I were the parents I’d be seeing a lawyer.

She is not fit to be a Teacher, fire her, No wonder he had problem, she didn’t like him.

Fire Her!!! That’s abuse.
The child probably has a higher IQ than her. Most do.
My grandson is on the Autism Spectrum… SCREW HER!
His regular school put him in an empty room with a couch and a monitor. Talk about ostracizing and depression. I found out early when I went to pick him up. OMG!!! The school cringes when I show up, I am sure cuz YAYA called EVERYBODY out. The next ARD my son and I showed up with a lawyer (ex marine) and a school advocate from United Health Care. The school brought their spineless, quivering lawyer whom I had already beat down.
He quickly was transferred to a special school in Houston. He wears a uniform and the school district here HAS TO TRANSPORT HIM!! 80 miles ONE WAY.
He loves the school and they love him.
KARMA BABY!!
My Daddy was a lawyer which certainly doesn’t make me one but growing up we always got to speak our peace. Some of my fave times even after growing up were “arguing” with Daddy.
So I’ve never been intimidated by ppl who supposedly think they are better than me.
My message to parents is: YOU are your child’s advocate and Super Hero Warrior. SPEAK UP. ASK QUESTIONS.
See if your insurance has school liaisons for special needs kids.
My grandson never is “annoying” to his teachers. They hug him. Reward him. But he doesn’t get rewards if he’s messed up.
Good luck. God bless these children.

This “teacher” needs to find a very different career path. Preferably as far away from any contact with children or the neurodiverse population as humanly possible. Just the thought of this makes my stomach turn.

she lacks the patience empathy and compassion to work with special needs students..terrible