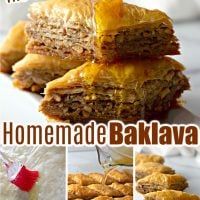 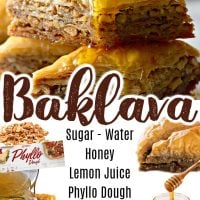 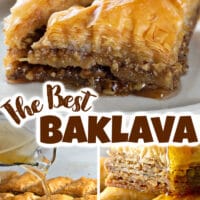 Delicate, flaky sheets of phyllo dough are layered with a crunchy walnut-and-cinnamon filling, and then soaked in a sweet honey syrup scented with fresh lemon. This Easy Homemade Baklava Recipe is a beloved traditional dessert you can make in your own kitchen!

Crispy, Syrupy Baklava Made at Home!

If you love store-bought baklava, get ready for a revelation! Because as good as the store-bought kind is, it’s no match for homemade baklava!

If you’ve never tried making your own baklava before, you might feel a little bit intimidated. All of those delicate layers, the golden sticky syrup, and the crunchy nut topping are so unlike a typical cake or cookie bake, right? But don’t let that stop you! It’s actually very simple to make homemade baklava, especially when you are using store-bought phyllo.

That’s right, the pastry for baklava comes ready-made! Even professional bakers rarely make phyllo dough in-house. So there’s no shame in our phyllo game! And once you have the dough, all you have to do is brush it lightly with melted butter, one sheet at a time, and layer it with an easy cinnamon-nut filling mixture. It’s really kind of fun! So grab your pastry brush, turn on some good music, and let’s make baklava!

Here’s what you’ll need to make classic baklava. For ideas on how to customize this recipe, check out the “Variations” section. And to see the complete recipe card with amounts, nutrition facts, and full recipe instructions, scroll down to the bottom of this post.

Are phyllo dough and puff pastry the same?

Phyllo dough and puff pastry are definitely similar in some ways, but they are not the same! Puff pastry is flaky and buttery, but ultimately it’s also bready: think crescent roll dough. While I’m sure it would make a tasty dessert paired with cinnamon, nuts, and honey syrup (hmmm, note to self: must try that sometime), it won’t be baklava.

Phyllo, on the other hand, doesn’t have a bready texture at all! Each sheet is paper-thin, and when layered with melted butter, those paper-thin sheets of dough turn into crackly, delicate layers that have a perfectly satisfying crunch.

How to Make Baklava

To make the baklava, it’s all about building the layers one by one, and then baking until done. From there, you’ll pour the syrup evenly over the whole thing, and let it rest so that the syrup is absorbed by the baklava. Easy!

Everyone has their favorite tips and tricks for making the perfect batch of baklava! Here are some of my favorite helpful hints for making this dessert with ease.

Since baklava is a traditional sweet in lots of different cultures (Greek, Turkish, Lebanese, Syrian, and Eastern European, just to name a few!) there are tons of different variations out there. Here are some easy variations you can try in your own kitchen!

How to Store Homemade Baklava

To store homemade baklava, cover it well with plastic wrap or place it in an airtight container. Baklava will keep its texture best if you store it at room temperature, rather than in the refrigerator. It will stay fresh for up to 5 days.

Can I Freeze Homemade Baklava?

Yes, you can! Wrap it well in several layers of plastic wrap, and freeze for up to 3 months. Thaw in the refrigerator or at room temperature before serving. 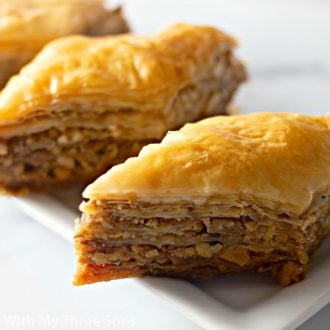 Have made baklava hundreds of times.  Be sure that the syrup is cold and the baklava hot or you will have a soggy mess.  Also, put one slice of fresh white bread into the processor when you are grinding, chopping, the nuts. Some people use bread crumbs.  This helps keep the nuts in place instead of falling out of the pastry when you eat it.  No matter what, it will taste delicious!