There is a sanctuary for sloths in Costa Rica. They filmed the baby sloths talking to each other. It’s so cute, the Internet can’t even deal

Sloths are the cutest animals you’ve probably never seen up close and personal. Of course they are. They always look so totally chill and happy, no matter what happens. 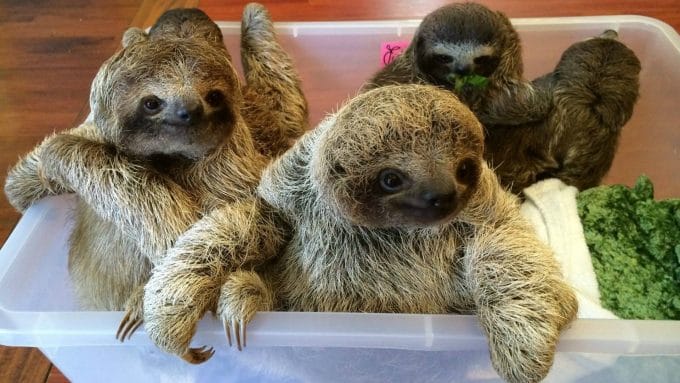 If you don’t smile, not even a hint of a smile, I don’t know know what to say. It’s the best, silliest, waste of 1 minute and 39 seconds on YouTube… this week. I have faith that next week YT will show us a cute video of a turtle vacuuming and I’ll write about that too. (Please. Someone. Film a turtle using a vacuum.)

When the internet discovered this video of these two baby sloths having a conversation, we all lost our minds. I’m raising my hand. I own it. I’ve watched it 3 times already. It’s very possible there will be a 4th time by the end of this post.

Don’t judge me. We all have our funny animal videos that make us laugh or get all up in our feelings.

Let me quick get you up to speed on all things sloth so you can impress your kids, win friends and influence people.

Sloths are mammals from Central and South America and are as cute as cartoons.

They spend pretty much every day of their lives just hanging upside down in trees in the rainforests of South and Central America. In fact, a solid 90% of their time is spent doing exactly that.

Believe it or not a sloth can live about 20 or 30 years in the wild. They eat leaves and shoots and once in awhile insects and birds. It takes them up to 30 days to digest one single leaf.

They always look like they’re happy. The way their face is shaped makes it appear as though they’re constantly smiling but those facial expressions remain the same even when a sloth is in pain or anxious. (Reminds me of every Grandma I’ve ever known.)

About 80 million years ago there were huge sloths. Scientists believe that those ancient mammals weighed up to four tons and measured up to 20 feet in length from their heads to their tails.

The way scientists describe sloths will be the same way they describe moms in the future.

Recent discovery: Ancient moms of the 2000s slept up to 45 minutes of their 7-day week. They lived off flat diet Dr. Pepper, half-eaten granola bars they found in their purse, and the occasional petrified french fry an angry toddler threw at them.

A mom from that time, a Mama Mammal, cared for her young by unrolling their dirty socks that were, for reasons researchers don’t quite understand, rolled up in damp, smelly, germ balls. She cleaned their faces with her own saliva and thumb.

She carried her babies in her arms from birth through their mid-twenties until they were finally old enough to feed and clothe themselves and not lose their hands by sticking them out a car window.

Early Mama Mammals could live to be 100 years old, although each child she gave birth to had the power to shave off at least 10 years of her life by not answering a single phone call.

What animal videos are your faves?

Drop a link in the comments. Extra points if it involves a vacuum.