Apple French Toast Casserole is like a heavenly combination of french toast and apple pie. This baked french toast recipe is always a huge hit for gathering. You can prepare ahead, let it sit overnight and bake the next morning.

This amazing recipe is so good and easy to make. You will want this every day of the week for a whole month, it’s that good! I love this as a breakfast, brunch, or dessert recipe and it is sure to be a hit for anyone who tries it.

Apples: I used gala apples which are a great baking apple to use.

Sugar: Using regular sugar will add moisture and sweetness to the casserole. I use brown sugar for the crumb topping too.

Cinnamon: This spice pairs so well with apples in general and is commonly used in a french toast as well.

Bread: You will use a combination of 1-day-old french and brioche bread for the toast part of the casserole.

Flour: You can use all-purpose or whatever flour you have on hand. This will mostly be used for the crumb topping because when it’s combined with butter, it gets super moist and fluffy.

Old Fashioned Oats: I like to add rolled oats to my crumb topping to make it really crumbly.

Step 1. Use pam baking spray to grease a 9×13-inch casserole dish and set aside. Add the apples, sugar, and cinnamon into a large bowl and combine. Then, set it aside. Put the bread into a large bowl and add half of the bread mixture into the prepared pan. Mix the other half with the apple mixture and combine. Put the apple and bread mixture into the baking dish.

Step 2. Add the eggs into a large bowl and whisk to combine. Put in the milk, ½ C sugar, 2 tsp pure vanilla extract, and 2 tsp ground cinnamon, and whisk to combine again. Pour the mixture on top of the ingredients in the pan. Use a spatula to gently press the bread down, so that it becomes completely submerged. Put plastic wrap on top to cover and store overnight in the fridge.

Step 1. Set the oven to 350 degrees and take the baking dish out of the fridge and let it sit on the counter for 30 minutes to rest. Add the flour, oats, brown sugar, cinnamon, and salt into a medium bowl and combine using a whisk. Add in the butter cubes and use a pastry cutter or fork to combine until crumb forms. Sprinkle the mixture on top of the ingredients in the pan and place it into the oven for 45-60 minutes or until the top is set and firm in the center.

Step 2. Place a foil tent on top of the casserole if you notice the casserole is not finished yet and bake it for another 10-15 minutes. or until set. Take it out of the oven and allow the recipe to rest and cool for 45 minutes. I like to top with maple syrup and fresh whipped cream. Serve and enjoy!

What Apples Do I Need For Apple French Toast Bake?

This recipe calls for gala apples, but any apples will work great. Some other great baking apples are granny smith or honey crisp apples.

How To Store French Toast?

Place the casserole in an airtight container or make sure to use a casserole dish with an airtight lid. This recipe can be left at room temperature. However, if you want it to last for a while, I recommend storing it in the fridge or even the freezer. 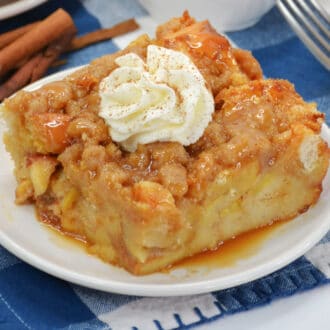 Breakfast Casserole Fall Recipes
0 Comments » // Leave a Comment »
« Previous PostSlow Cooker Tropical Chicken
Next Post » Mother Takes The Pain Of Losing A Child And Turns It Into Something Beautiful: The Story Of Rylei