We have had so many emails and feedback on our Star Wars food ideas that we made awhile back so we thought that we would go ahead and make it easier for everyone to see all of them in one post. My 5 year old has become a Star Wars fanatic so I am sure we will be making a lot more fun Star Wars food in the near future! 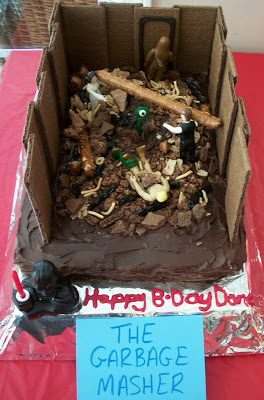 My now 5 year old has never wanted just a normal cake. However, that is just fine. I love how he can think outside of the box! He did have some help from his Uncle Brian thinking up this one and I was fine with how easy it would be. The Garbage Masher happens to be his favorite scene from Star Wars so we tried to come as close to it as possible. It’s definitely original! The big Star Wars fans really appreciated this cake and just thought it was awesome!

We made our walls with the chocolate graham crackers. We glued each of them together with the cookie icing over lapping them. We set them aside to dry. We made our chocolate cake in the 9×13 pan. We used parchment paper on the bottom for easy release. We needed the cake just a little large for the walls to fit so we broke off 3 small pieces of the graham crackers and stacked those around the whole cake. Worked out great! Then we frosted the whole thing with our chocolate frosting.

We broke up different pieces of cookies and candy that we had around the kitchen and scattered them around the cake. We used black twizzlers, graham crackers, chocolate chips, large pretzels, Star Crunch cookies, etc… We then arranged our washed and cleaned figures to the cake. Leia and Han Solo are holding a large pretzel stick for the pole that was used in the scene. We then placed our graham cracker walls around the sides. We placed Chewbacca at the door and Luke being pulled under by the creature. For the creature we covered half of a pretzel stick with a green fruit roll up. We attached a green jelly bean for his head and our edible eye ball on the jelly bean. We used the rest of the fruit roll up for the creatures leg that is pulling Luke under.

If we had more time we would have covered Han Solo and Luke in white fondant to look like they were wearing Storm Trooper outfits like the scene, but we ran out time! This was a pretty easy and fun cake to make!! My little Star Wars birthday boy was very pleased!! 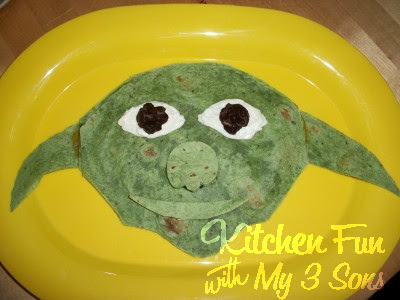 This Yoda quesadilla was just something fun we did last week unrelated to his party. I had some spinach tortillas and thought something like this would get the boys to try it out. My soon to be 5 year old always tends to run at the sight of green…however, this quesayoda did the trick in getting him to try it and actually like it!

Just cut a yoda shaped head out of the tortilla. We used the scraps to make the ears. Put the cheese inside and either fry it up on the stove or microwave it for 30 seconds or so. Let it cool just a bit. Put on the sour cream for the eyes and the black beans for the pupils. We also used scraps to make the nose.

Super easy and so much fun for the kids! 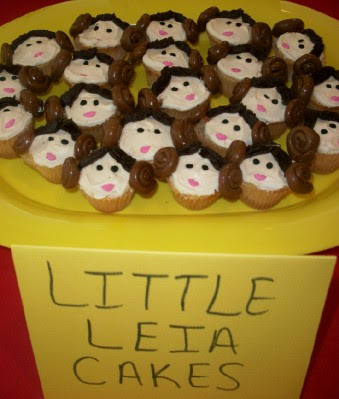 We made this mini Leia cupcakes for the Star Wars party. We used cake mix, frosting, valentines candy, and tootsie rolls.

Make your favorite cake and bake in mini muffin pans…set aside to cool. We put tootsie rolls in the microwave for 8 minutes and rolled them into a strip. Then we rolled that into a spiral. Worked out perfect and quick! We added just a little flesh color to the vanilla frosting. Frost the cupcakes and add your candies for the eyes and mouth. We happened to have left over Valentine candy…lips and dots. You could either pipe on the lips or just use hearts. Pipe on chocolate frosting for the hair. Add your Leia buns last.

These were a big hit with the kids and adults! 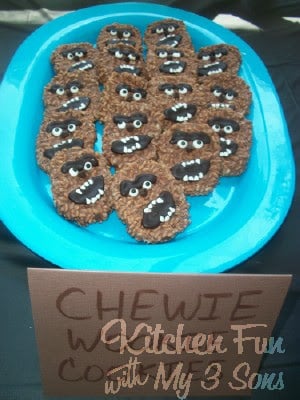 We decided to use the Star Crunch cookies because we thought that the crisp rice in the cookie would look like hair and well…they are chewy!. They are round so we shaped them into more of a square. We added our chocolate cookie frosting for the mouth and to attach our edible eyes. We piped more frosting over the top of the eyes. We attached our mini chocolate chip for the nose. We broke mini heart candies in half for the teeth. Pointed side down for the fangs and the rest on the rounded side.

The kids loved them…and our Wookiee Cookies were gone in a flash! 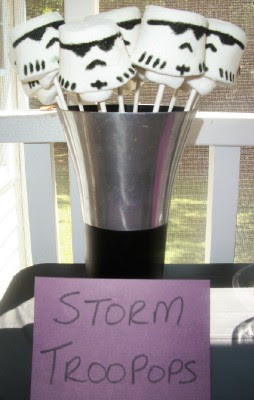 We made a hole in the bottom of the jumbo marshmallow and stuffed a large marshmallow inside to make it flare out a bit. Just draw on the Trooper face with the black edible marker and put it on a stick. This was definitely the favorite for the kids at the party and SO easy! 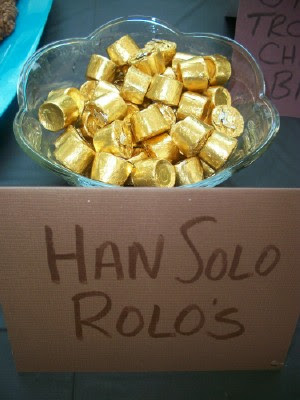 Ok…this is just really goofy, but we couldn’t think of anything else that went with Han Solo!ha Plus…we like easy!! 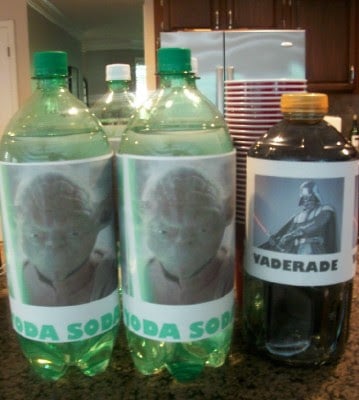 We came up with these Yoda Soda and Vaderade bottles for drinks. Everyone loved it and thought it was so cute. The boys were really excited because I usually never let them drink soda! 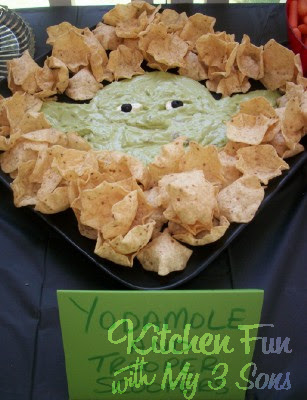 We thought it would be cute to make Yoda out of guacamole. We just shaped his head and ears with our guacamole. Make a nose with it as well. We made his eyes with sour cream and black olives. We used scooper chips so we could label it as Yodamole and Trooper Scoopers! 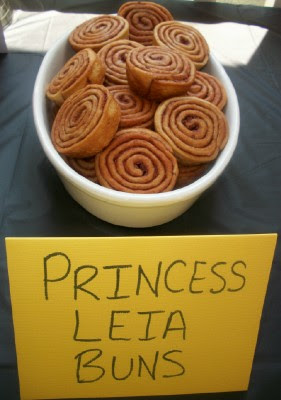 Here is another easy idea. Just take some of the pre-packaged mini pinwheel buns and label them as Leia Buns! 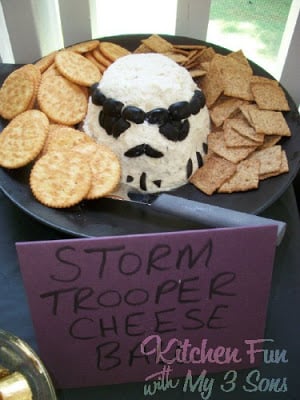 Mix everything together besides the olives. Shape the ball into a Storm Trooper head. Slice up the olives for the face and other details. This cheese ball was actually very good! 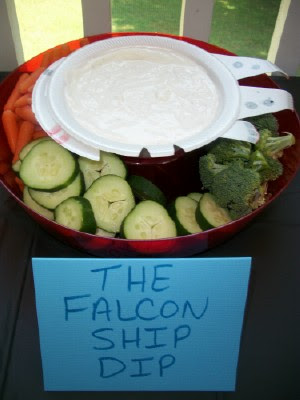 The Falcon Ship Dip! We just took 2 styrofoam bowls and cut one of them out to make the ship. We had to have something healthy and this is all we could come up with for veggies. 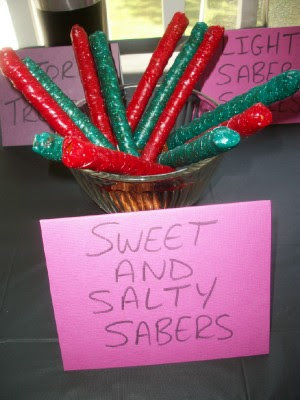 We made sweet and salty sabers with large pretzel sticks and fruit roll ups. 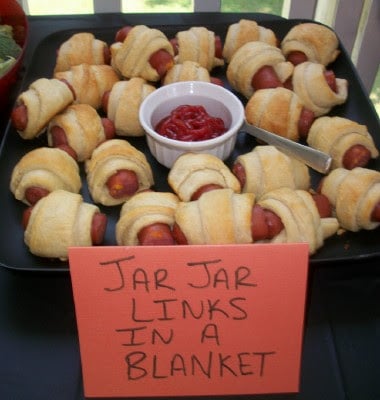 We made Jar Jar Binks in a blanket. These are always a hit at kids parties and we thought the name was cute. We used turkey dogs and croissant rolls. 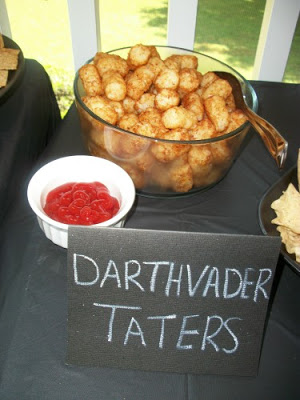 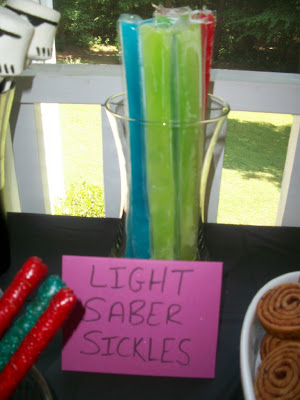 Light Saber Sickles. We thought this would be fun to stick out last minute. We just took different colored popsicles and put them in a bowl. Of course we put them out later so they would not melt. 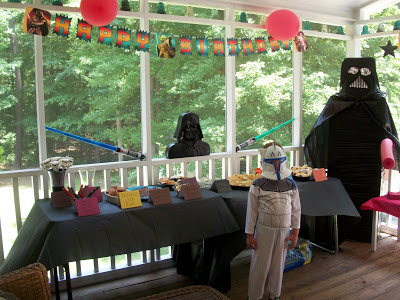 One of the party tables and the birthday boy! We made a giant Darth Vader out of boxes and trash bags. We used one of those pool toys for his saber.ha Another thing that we did was blow up long balloons (the ones people make animals out of) and wrap foil on the bottom for the kids to have their own sabers. Plus…no one gets hurt! They loved them! Forgot to take a picture with all of the craziness of the party.

My Troopers and our little Darth Vader. Such a fun party! We tried to think up original ideas and hope that you can use some of them for your next Star Wars party!

These boy party ideas were also featured on Spaceships and Laser Beams.

How did you make the guacamole into the shape of Yoda's head?

Just make a circle shape & then the ears. Add a little more for the nose & shape the mouth with a knife. Hope this helps!:)

We made a giant Darth Vader out of boxes and trash bags. … istormtroopercostume.blogspot.com

I am SO bookmarking this for hubby's birthday. He is a huge Star Wars fan, and this would make him one happy man! (Proof that there is no age limit in either direction when it comes to Star Wars).
Visiting from, well, from your link up lol