This Old Fashioned Whiskey Cake is bursting with the perfect amount of whiskey flavor. The bundt cake is infused with whiskey, then topped with a whiskey glaze and finished chopped walnuts.

If you’ve never thought of adding whiskey to a cake before, now’s the time to start considering it. This boozy bundt cake is full of incredible flavor and easy to make! Adding whiskey gives this dessert a caramel-y, vanilla-y flavor with just a hint of almond. A cinnamon mixture is added to the middle of the cake and sprinkled over the top just before baking, which gives the cake a delightful burst of flavor. Once the cake has been baked, a sweet whiskey glaze is poured over the top, then finished with chopped walnuts so that you get an irresistible combination of crunchy nuts and tender cake in every bite.

Here’s a quick overview of what you’ll need to make this cake. Be sure to scroll down to the recipe card for specific amounts.

How to Make a Whiskey Cake

Why Does the Cake Have to Cool?

You want to give your cake time to cool so that the glaze doesn’t just slide off the sides of the cake. If your cake is hot or even very warm, the glaze won’t stick to the cake or thicken properly. By contrast, if you pour the glaze over a cooled cake you’ll get a nice thick coat that sticks to the cake.

Is This Cake Safe for Kids to Eat?

The cake is safe for children to eat because the alcohol evaporates during the baking process. However, as a parent, you are the one who decides whether you want your children to eat this recipe. If you are a friend or family member of someone who has children, I recommend mentioning that the cake is infused with liquor.

Can I Make This in a Regular Cake Pan Instead?

As written this recipe is meant to be baked in a bundt pan. In order to make it a different size pan, you would need to adjust the ingredients and baking time.

How to Store & Freeze this Cake

Let your cake cool completely, then store it as follows: 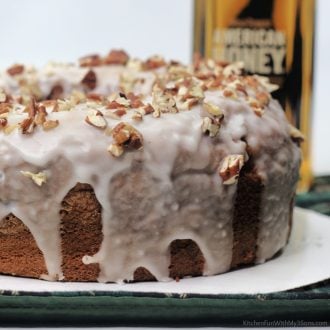