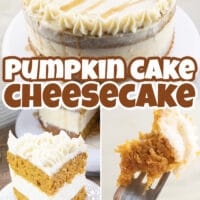 Two of your favorite desserts are merged together in this yummy Pumpkin Cheesecake Cake! This recipe has layers of pumpkin cake and spiced cheesecake in between fluffy cinnamon cream cheese frosting. If you love all things fall and pumpkin spice you’ll love this dessert and all the other great ones we have here. 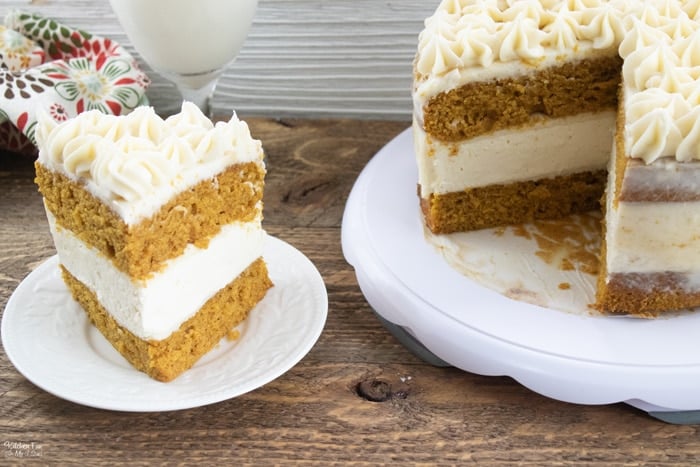 Why decide between two desserts for Thanksgiving when you can merge them together? Everyone who grabs a slice will be asking for the recipe, guaranteed. Not only is the cake amazing, but we top it off with a homemade cinnamon cream cheese frosting. Every bite of this dessert is full of fall flavors.

If you can’t get enough pumpkin this time of year, you can give these a try, too: Pumpkin Pie Dip, Pumpkin Cake Roll, Easy Pumpkin Dump Cake. 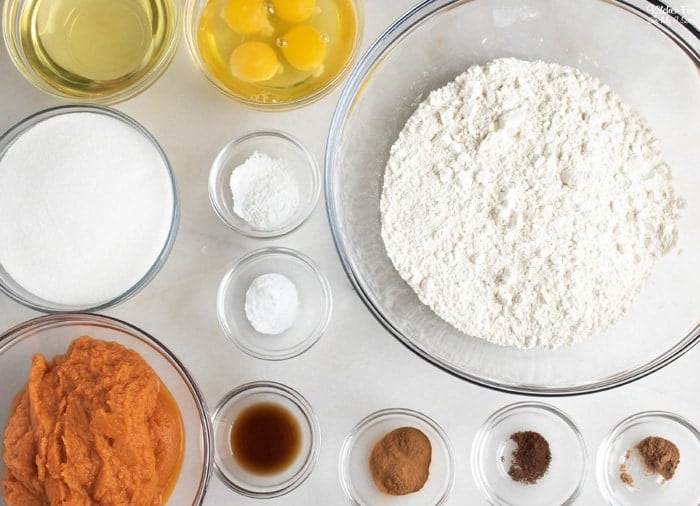 Here is everything you will need to make this cake. Many of the ingredients repeat themselves in the layers; you’ll use several of these things in the cake, the cheesecake and/or the icing. The full amounts are below in the printable recipe box. 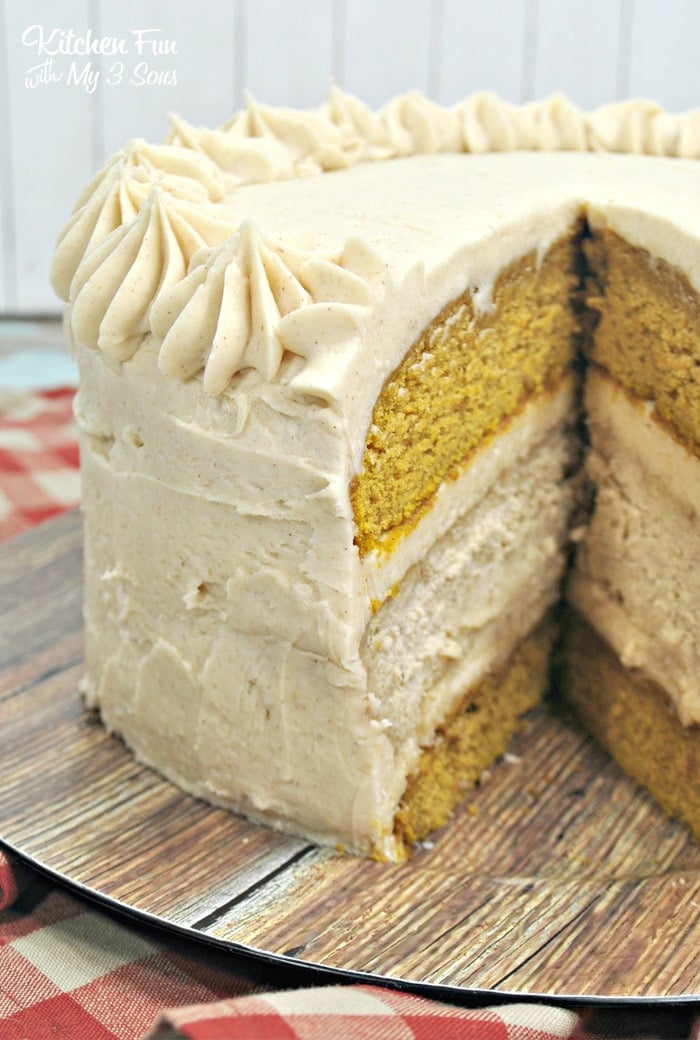 How To Make The Best Pumpkin Cheesecake Cake

To make this dessert, you will make each layer separately, then stack them together. The cheesecake does need to cool in the fridge overnight, so make sure to plan for that.

1. Start the cheesecake. Mix the cream cheese, sugar and flour first. Then, add in the vanilla, the sour cream and spice. Next up is the eggs; add them in slowly, one by one. 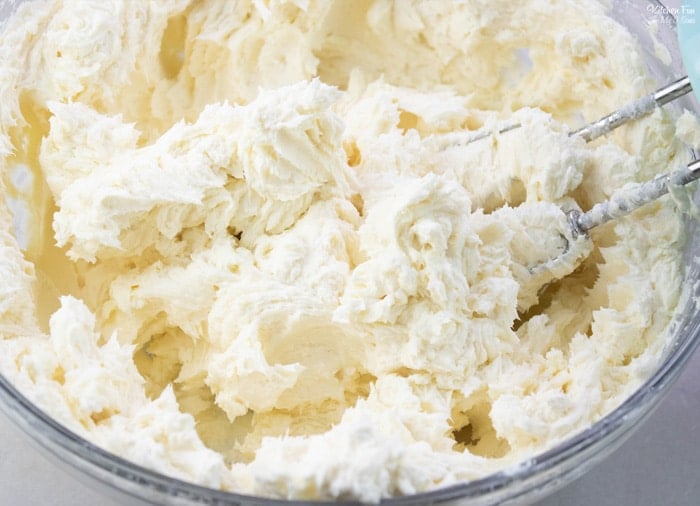 3. Make the pumpkin cake batter. Start by creaming sugar and cream cheese. Beat in the oil and vanilla. Then, eggs and egg whites. Separately, stir the dry ingredients together and slowly pour half of it into the wet mixture. Next, add the pumpkin puree, mix, and then the rest of the flour mix.

4. Bake cake. Using two round cake pans, bake the cakes on 350 for about 25 minutes. Allow them to cool completely. 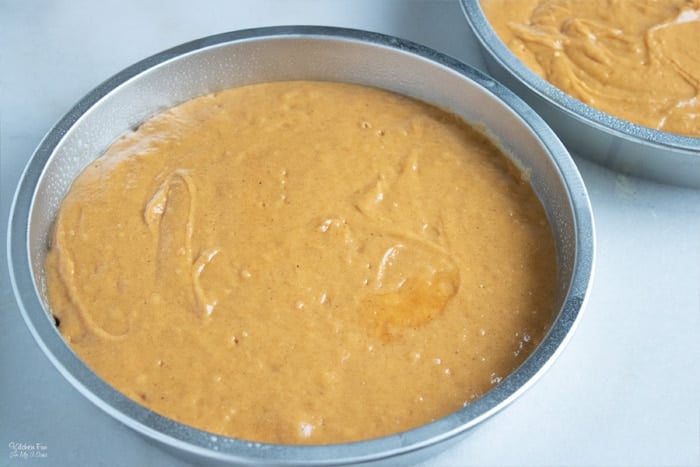 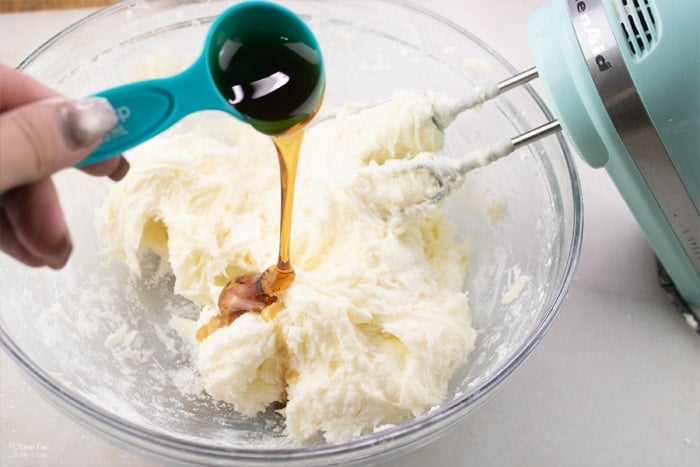 5. Put the cake together. Cut the tops of the cakes off to make them flat. Then put one onto a cake plate and layer frosting on top, the cheesecake, more icing, the second cake, then more icing. 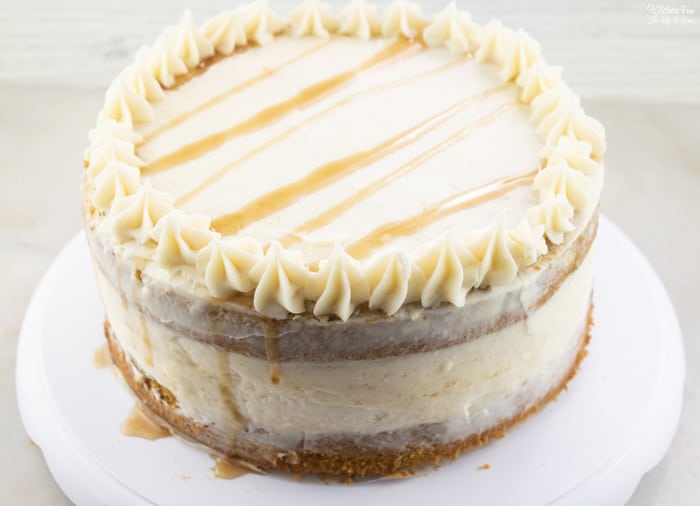 We show two different frosting options. You will get the full frosted version in the recipe box below. For frosting just the top of the cake, you will want to cut back and use this recipe…

Maple Cream Cheese Frosting (for the top of the cake only)

How To Store Pumpkin Cheesecake Cake

Keep this cheesecake cake refrigerated when not serving. It will last about 4-6 days but don’t worry, it will get gobbled up real quick! 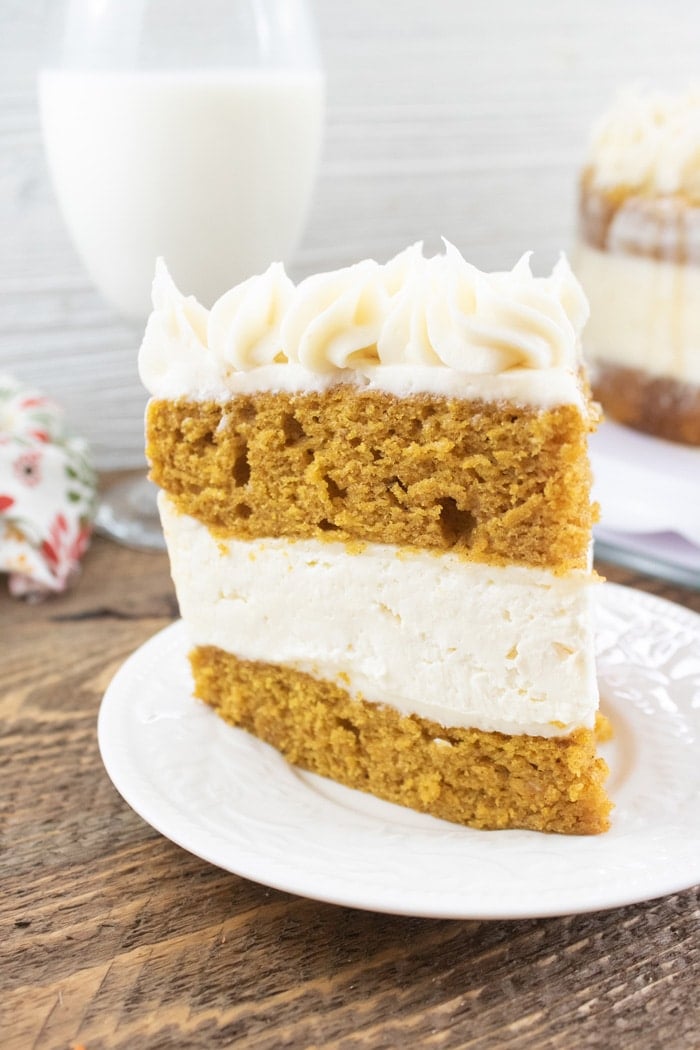 30+ of the Best Fall Recipes 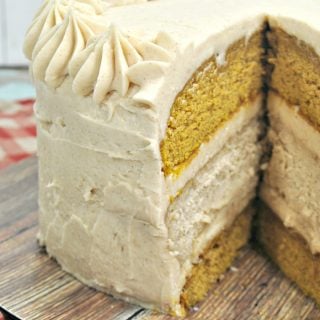 How To Build The Cake

WOW ! sounds very good. I will have to try it !