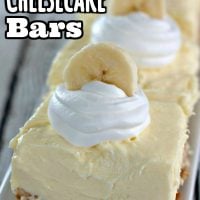 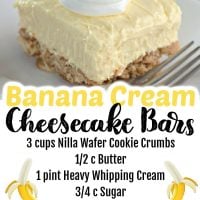 Banana Cream Cheesecake Bars are a delicious creamy, banana flavor filled treat. You’ll love this easy dessert that you can whip up one day and have them ready for your picnic, potluck, or any occasion dessert the next day! 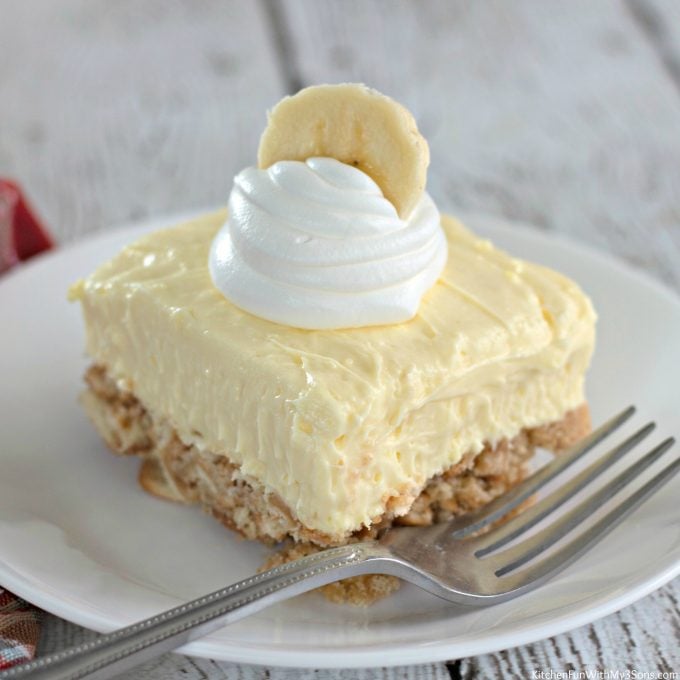 We loved this banana cheesecake for it’s delicious flavor, creamy texture, and also because it is no-bake. This is a really perfect summer dessert! With the Nilla Wafer crumb crust, it will remind you of the classic favorite banana pudding, but in no-bake cheesecake form.

Here’s what you’ll need to make Banana Cheesecake Bars (the exact measurements and full recipe instructions are below in the printable recipe card): 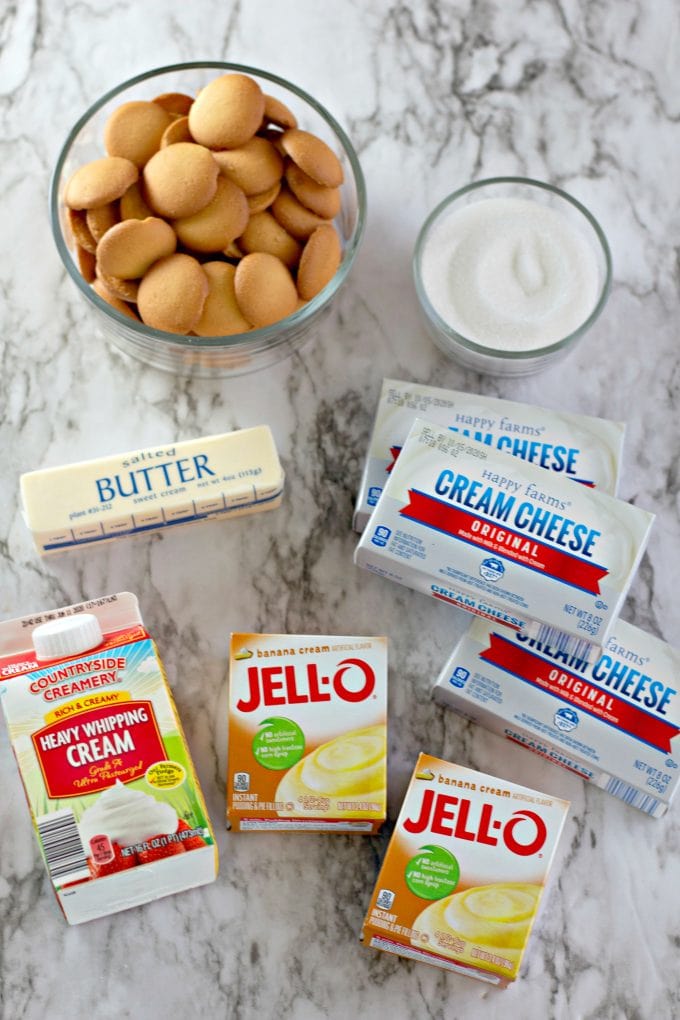 Crush the Nilla Wafers, either with a food processor or by placing the cookies in a zip top bag and crushing them with a rolling pin. Mix the cookie crumbs with melted butter and then press into the bottom of an 8×8-inch that has been lined with parchment paper. The paper will make it easier for you to lift the whole cheesecake out of the pan after it chills so you can cut it into bars to serve. 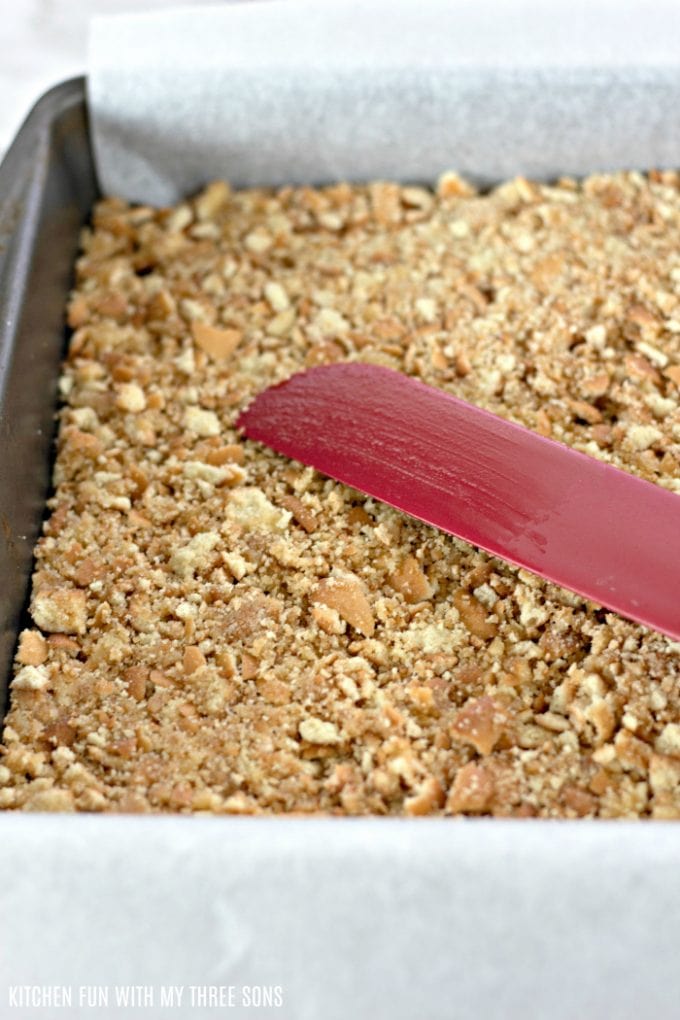 In a large metal mixing bowl (I like to place the bowl in the freezer for 10 minutes so it’s cold), beat the whipping cream and sugar together until stiff peaks form; set this aside.

In another large mixing bowl (or the bowl of a stand mixer), beat the cream cheese until smooth. Add the instant banana pudding a little at a time, mixing well between each addition. This mixture will become very thick, so this is best done with a good hand-held electric mixer or a stand mixer.

Add the whipped cream and beat until smooth. Scoop the cheesecake mixture over the Nilla Wafer crust and spread out evenly. 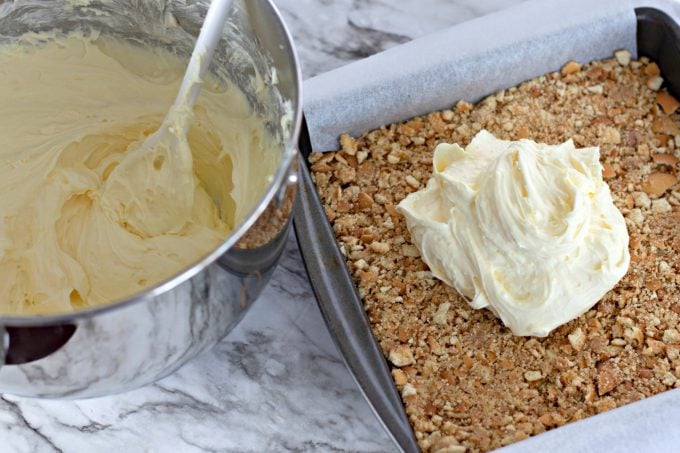 Refrigerate the cheesecake for 8 hours, or overnight. The reason for this is that the chill time will allow the cheesecake flavors to meld together. The Nilla Wafer crust also softens, which is a really nice texture that will remind you of the wafers in a banana pudding dessert.

Lift the chilled cheesecake out of the pan by using the edges of the parchment paper as handles. 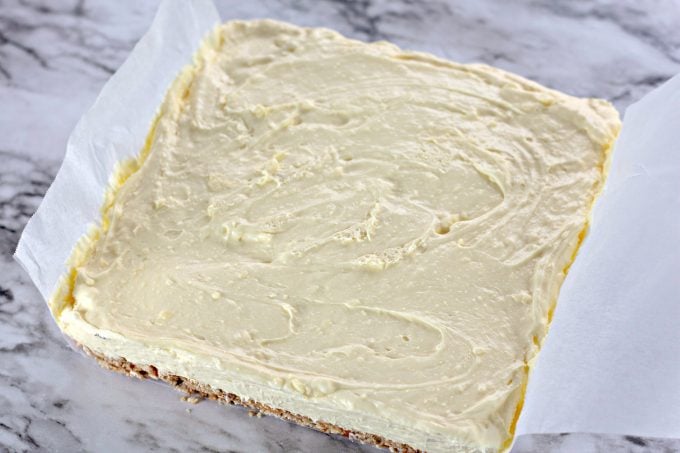 Cut the cheesecake into 9 squares. 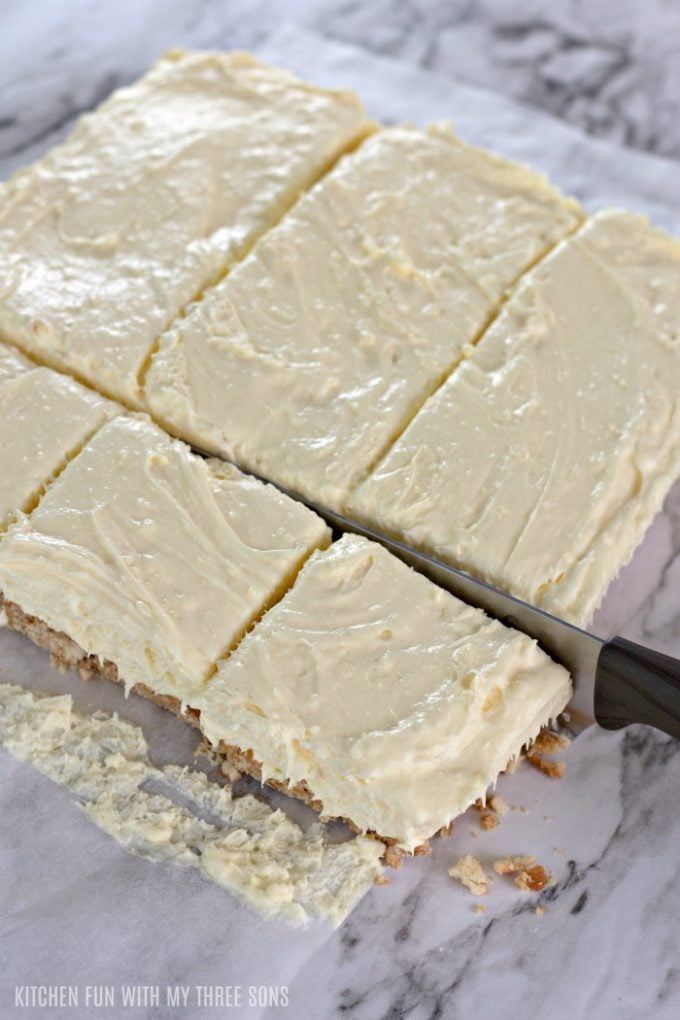 Top the cheesecake bars with the garnish of your choice (ideas below). We used whipped cream and a banana slice. 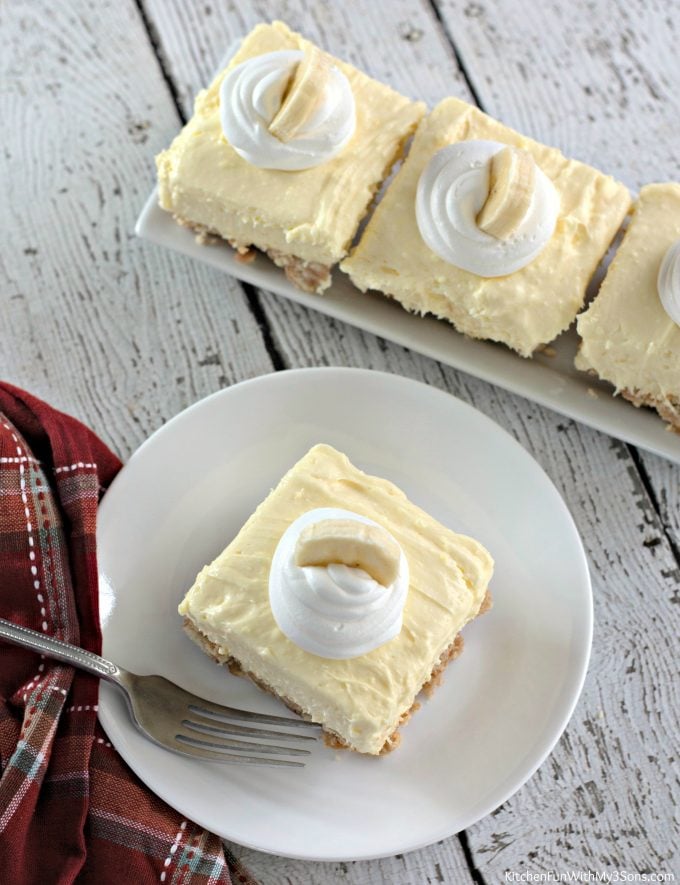 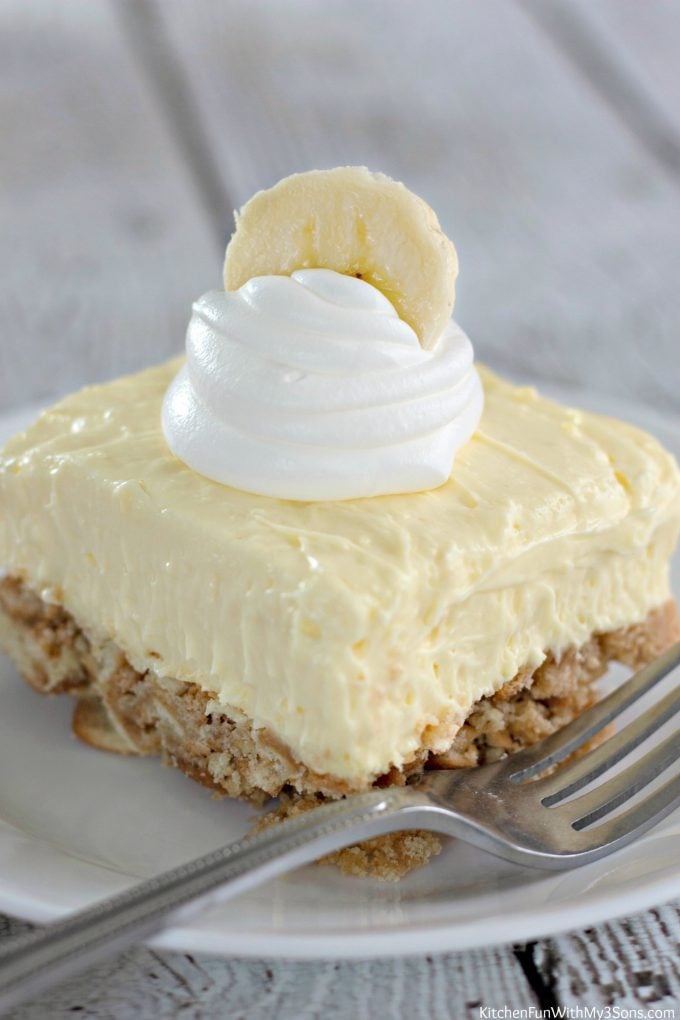 How to Store the Banana Cheesecake Bars

Cover the bars with plastic wrap and store in the refrigerator for up to three days. Always serve chilled. 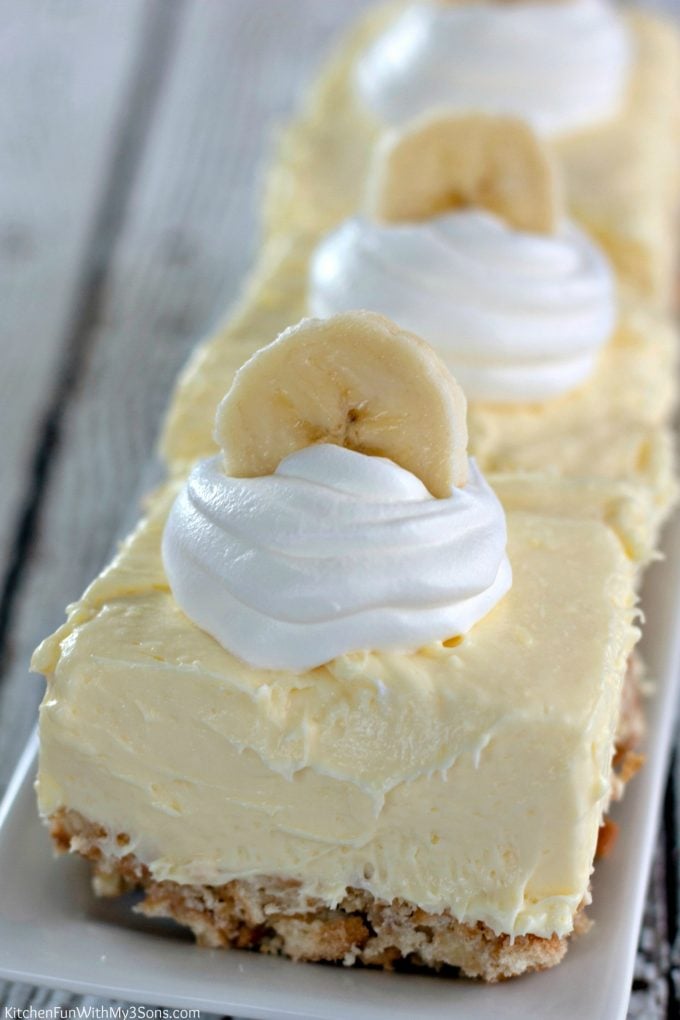 More Recipes You Will Love 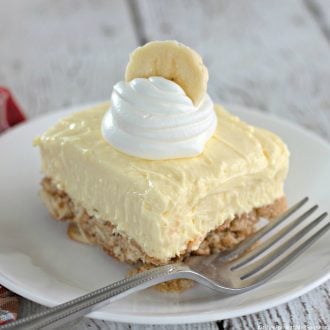 Published By Jill
Banana Cheesecake Bars are a delicious creamy, banana flavor filled treat. You'll love this easy dessert that you can whip up one day and have them ready for your picnic, potluck, or any occasion dessert the next day!
5 from 171 votes
Print Recipe Pin Recipe Rate this Recipe
Prep Time 20 mins
Chilling 8 hrs
Course Dessert
Cuisine American
Servings 9 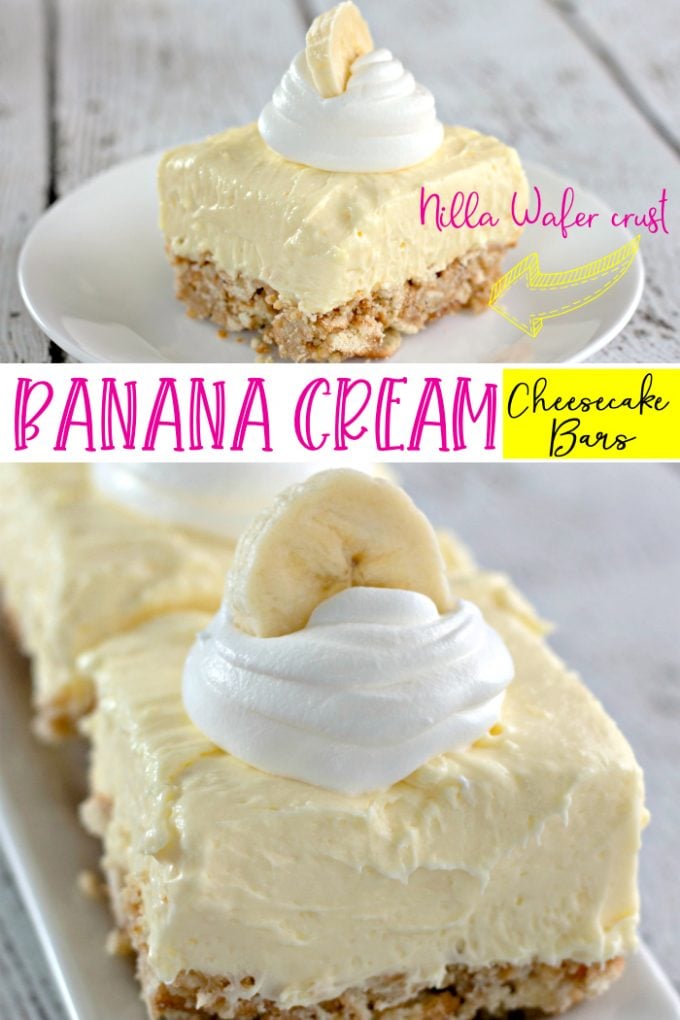 I am trying.to get the banana. Cheesecske recipe!! I need to taste that right now!!! You have wonderful recipeso uhcsan KITCHEN FUN!!

I can’t wait to try this!

This recipe is right up my alley.  Few ingredients and a delicious flavor.  Light dessert to follow a big meal.

This sounds great, but I would just call it cheesecake. Bars makes it sound like you can pick it up and eat it.

I wonder if you can use fresh banana’s instead of pudding mix with the cream chz?

Has anyone tried doing this using sugar free pudding mix?
I am gg to try doing it no sugar added  and the quantity of pudding mix has me wondering if it will set up right.  Sugar free mix is only 1 ounce and not 3.4 ounces