Cheesecake will always be a favorite dessert in my household and with all the different recipes out there, one more recipe won’t hurt. This Banana Foster Cheesecake is a great twist on a classic. With all the flavors of banana foster, this cheesecake is topped with bananas and caramel.

This Banana Foster Cheesecake is so delicious! The recipe has a wonderful blend of ingredients to create a smooth and soft texture. The flavoring and brown sugar topping of this recipe make everything come together perfectly. Be sure to add this recipe to your favorites and keep this handy for the future. If you are a banana cheesecake lover, than you are sure to enjoy these Mini Banana Pudding Cheesecakes or these Banana Cream Cheesecake Bars.

How to Make Banana Foster Cheesecake

To start, set the oven to 350 degrees and use a non-stick cooking spray such as Pam to grease a 7-inch springform pan.

First, in a medium bowl, add the grahma cracker, melted butter, and cinnamon and combine until it forms a wet sand-like consistency.

Thirdly, put the crust into the oven for 10 minutes at 350 degrees, then take out and place it aside.

To begin, add the cream cheese, brown sugar, flour, cinnamon, and nutmeg into a large mixing bowl dn using a hand whisk, combine until smooth and fluffy while using a rubber spatula to scrap the sides of the bowl.

First, one at a time, add the eggs in the batter and use a whisk to fully combine. (DO NOT overmix, overmixing will cause too much air in the batter)

Secondly, add in the mashed bananas and dark rum using a spatula to fully combine.

Thirdly, add the prepared filling into the crust.

To start, use aluminum foil to cover the top of the cheesecake.

First, fill the Instant pot with 1 cup of water, then put the trivet in and set the cheesecake on top.

Secondly, put the lid on top of the Instant pot and switch the valve to “SEAL” and set for 35 minutes on “HIGH” pressure.

Thirdly, allow the pressure in the Instant Pot to naturally release.

Next, take the cheesecake out of the Instant Pot and then, use a paper towel to remove the built up moisture.

In addition, transfer the cheesecake to a wire rack to cool to room temperature.

Furthermore, take off the springform from the pan and use cling form to wrap the cheesecake to place into the fridge for 8 hours or overnight for the best results.

To start, turn the oven temperature down to 330 degrees.

First, use foil to double wrap the bottom of the cheesecake.

Secondly, using a large and deep enough baking dish, place the cheesecake inside, the pour in boiling water around the cheesecake. (The water should be halfway up the side of the cheesecake)

Thirdly, place the cheesecake into the oven for 60-70 minutes, or until the middle is slightly jiggly. (Should not be watery/runny)

Next, switch off the oven and open the oven door a little bit, then allow the recipe to stay in for another hour.

Furthermore, take the cheesecake out of the oven and transfer to a wire rack to cool to room temperature.

In addition, take off the outer section of the spring-form, then use clig film to wrap the cheesecake to place in the fridge for 8 hours or over night for best results.

To begin, add the butter into a medium sauce pan and melt on low-medium heat.

First, put the brown sugar and spiced into the butter and heat until the sugar is completely dissolved.

Secondly, pour in the heavy cream and combine until fully incorporated.

Thirdly, pour in the dark rum, then light the rum using a lighter to allow it to cook. (Allow the flame to burn for a few minutes) To evenly disperse the rum, you can swirl the pan and flames, if necessary.

Next, put in the bananas and use a spoon to evenly coat them in the caramel mixture, then allow the recipe to cook until the sauce thickens.

In addition, take the saucepan off the heat and allow the mixture to cool. (As the recipe cools, it will become even more thick)

Furthermore, pour the banana topping onto the finished cheesecake.

What is Bananas Foster?

Banana Foster is an American-made dessert. This dessert will include ingredients such as bananas, vanilla, sugar, brown sugar, and other ingredients for flavor. It is normally in the form of ice cream with bananas and a caramel sauce.

Does This Banana Cheesecake Have Alcohol?

This Banana Cheesecake uses Rum extract in the batter and the topping. The rum extract is a concentrated flavor that tastes like rum. Depending on the brand of extract you use, you may have a percentage of alcohol in the extract. You can use brands like Mccormick or Watkins brand if you don’t want alcohol in your cheesecake.

Can I Make This Cheesecake to Freeze?

Most cheesecake recipes you can make to freeze later on for whatever time you need it. For this Banana Cheesecake, you can do just that. You can freeze or store in the fridge also when you need to store leftovers. Placing it in a sealed container will make sure the cheesecake does not go bad.

What Size Pan Does Instant Pot Cheesecake Use?

For this particular recipe, you will be using an 7-inch pan. Specifically, this recipe calls for an 8-inch spring-form pan. This will allow the recipe to easily be removed from the pan.

How do I know cheesecake is cooked all the way?

The best way to test if your cheesecake is done is by gently shaking the pan. You want the middle to have a slight jiggle, but not be runny/watery. The center of the recipe should jiggly while the rest is almost set. 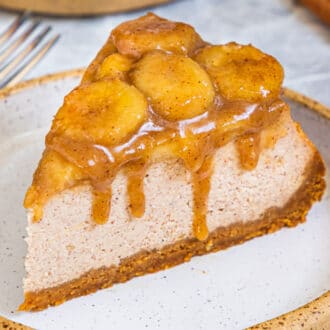 Published By Jill
Cheesecake will always be a favorite dessert in my household and with all the different recipes out there, one more recipe won't hurt. This Banana Foster Cheesecake Recipe is a great twist on a classic. With all the flavors of banana foster, this cheesecake is topped with bananas and caramel.
No ratings yet
Print Recipe Pin Recipe Rate this Recipe
Prep Time 30 mins
Cook Time 45 mins
Cooling Time 8 hrs
Total Time 9 hrs 15 mins
Course Dessert
Cuisine American
Servings 8 servings

Graham cookies can be substituted for other cookies such as gingersnaps, shortbread cookies, digestives etc.
· When adding in the eggs, whisk only until the eggs are just incorporated into the batter. Do not overmix to avoid getting too many air bubbles into the cheesecake which may cause cracks in the cheesecake.
· If you do get a crack, do not worry too much as it will be covered by the banana foster topping.
· Use ripe bananas for maximum sweetness and flavor
· If you do not want to use rum, substitute it for rum extract
· Keeps well in the fridge in an airtight container for 3 days after which the banana foster topping may go bad.
Tried this recipe?Mention @kitchenfunwithmy3sons or tag #kitchenfunwithmy3sons!