German Chocolate Brownies are a combination of homemade brownies made with German chocolate and topped with a toasted coconut and pecan frosting.

These simple brownies are so good. This brownie recipe has the perfect combination of ingredients to make a great flavor, texture, and look. If you are a fan of German chocolate cake, you will absolutely love these brownies.

Evaporated Milk: Combining this with the toasted coconut and chopped pecans will give the brownies a sweet, salt, and crunchy layer.

Melting Wafers: I like to melt this chocolate to add on top for garnish.

How To Make German Chocolate Brownies

Step 1. Set the oven to 350 degrees and use parchment paper to line a 9 x 13-inch baking dish and lightly spray with cooking spray. In a large pot or dutch oven, add the butter and melt on medium-low heat. Break up the chocolate and put it into the pot and melt. Stir regularly until smooth. Remove from the heat and add in the sugar. Whisk to combine one at a time adding in the eggs and whisking again. Add in the vanilla and salt and combine using a whisk. Put in the flour and combine again until there are no dry patches. Add the prepared mixture into the baking dish and set it in the oven for 35-38 minutes to bake. Place a toothpick in the center to check for doneness. Take out and transfer to a wire rack.

Step 2. In a medium-sized sauce pot, add the sugar, evaporated milk, butter, and egg yolks. Put on a stovetop over medium-low heat and combine. Mix regularly until melted. Allow the mixture to simmer until nothing is sticking to the bottom. Allow it to slightly thicken for about 12 minutes before taking off the heat. Put in the coconut, pecans, and vanilla and combine until thickened and spreadable. This should take about 5 minutes.

Step 3. Add the mixture on top of the brownies and use a spatula to smooth it out. Allow it to cool thoroughly before cutting into squares. Add the melted chocolate on top by drizzling and serve right away.

How long this recipe lasts depends on how it is stored. You will need to store the recipe in an airtight container for the best storage method. It can last for up to 2 weeks in the fridge and up to 6 months in the freezer.

What is German Chocolate? 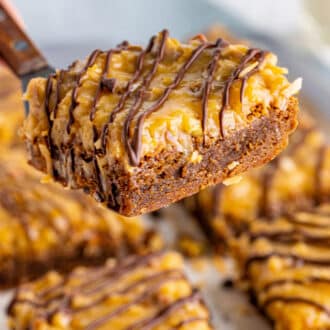 If you can’t find or don’t have German baking chocolate you can use semi-sweet or unsweetened baking bars. However, the brownies will not be “German” chocolate any longer. I like to use toasted coconut and toasted pecans to give the frosting a deeper flavor than using untoasted. This step is completely optional and up to you! The brownies themselves are moist and fudgy. German chocolate is a lighter chocolate flavor than semi-sweet or other chocolates and you can definitely tell with these brownies. They are not over-the-top chocolate flavored but on the lighter side. I think this works perfectly with the frosting as not one flavor overpowers the others. I like to add a drizzle of melted chocolate. I use melted dark chocolate wafers from Ghirardelli because they melt very smooth and harden fast. But, using your favorite melted chocolate for the topping, semi-sweet, dark, milk, or even white chocolate would be good. Or, leave that step off completely! Sometimes when purchasing pre-chopped bagged pecans, the pecans pieces are still on the big side so I always chop them a little more by hand. I find this easier to cut the brownies since I don’t have to slice through large pecan pieces. The topping does not harden but stays nice and gooey. These brownies are best served at room temp because of this, they are some of the best brownies we have ever tasted. Keep at room temp for up to 3 days. Refrigerate for up to a week. Freeze for up to 3 months. If freezing, I would freeze the bars individually and then place them in an air-tight container between layers of wax paper so they don’t stick to themselves.
Tried this recipe?Mention @kitchenfunwithmy3sons or tag #kitchenfunwithmy3sons!